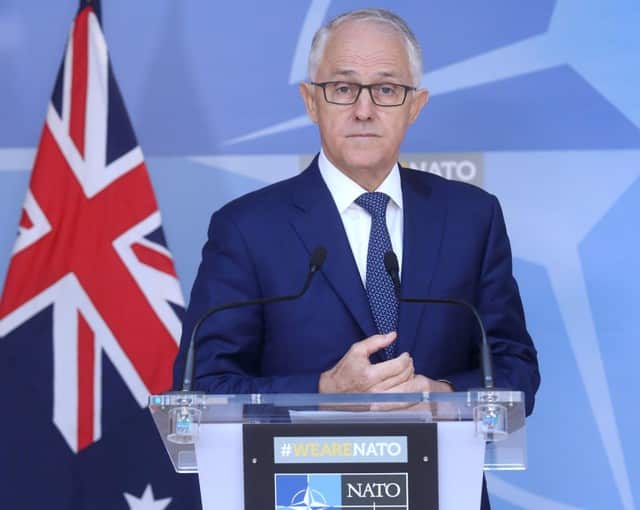 Australian Prime Minister Malcolm Turnbull on Monday stripped requirements for reducing greenhouse emissions from his centrepiece energy policy in the face of political opposition, although the country remains a signatory to the Paris Agreement.

While stopping short of following the lead of US President Donald Trump and withdrawing from the global climate accord, Australia removed requirements from its National Energy Guarantee plan that would have mandated that greenhouse emissions from its power industry decrease by 26 per cent from 2005 levels by 2030.

As Australia‘s east coast suffers through its worst drought in 60 years, Turnbull said he would seek to legislate emission reductions in the future.

He added that his government would move legislation to reduce emissions when it had sufficient support from its own party. Despite the impasse, Turnbull said the government was committed to its Paris accord commitments.

“The legislation to move forward with the emissions component of the National Energy Guarantee will not be able to pass the House of Representatives,” Turnbull told reporters in Canberra.

Turnbull has a parliamentary majority of just one. With several rank-and-file lawmakers vowing they would not support any legislated emission reductions, such mandates are likely to remain elusive until at least a year.

The decision drew immediate scorn from critics who dismissed suggestions that a reduction could be achieved without mandated legislation.

“The announcement is a setback for global action to reduce carbon emissions,” said Will Steffen, a climate scientist at the Australian National University.

“Australia is a global lagger in meeting its emission targets,” he added. “Independent research shows emissions are creeping up over the last three years; I’m very sceptical that without immediate action, Australia can meet it commitments.”

Australia – one of the largest carbon emitters per capita because of its reliance on coal-fired power plants – is among nearly 200 countries committed to the Paris Agreement.

The United States in 2017 became the only signatory to withdraw from the accord.

Australia‘s National Energy Guarantee was supposed to end a decade of infighting about howAustralia could boost power reliability while reducing carbon emissions.

But by requiring Australia‘s electricity sector to reduce emissions by 26 percent, old wounds were reopened which split the government along ideological grounds.

Conservatives, led by former Prime Minister Tony Abbott, who committed Australia to the Paris accord when he led the country, argue reducing emissions puts Australia at an economic disadvantage after the United States withdrew from the Paris accord in 2017.

The message resonates with rural voters, a key electorate for Turnbull, a social liberal who throughout his political career has voiced support for addressing climate change.

“It’s a complete capitulation to the right-wing members of the Liberal Party of Australia, who want to perpetuate Australia‘s coal economy,” said Robyn Eckersley, Professor and Head of Political Science at University of Melbourne.

“The stakes are too high for partisan and personal politics to spoil this opportunity to move energy policy into the 21st century,” said Andrew Richards, chief executive officer at the Energy Users Association of Australia.

Turnbull, however, moved to quell the reports.

“Peter Dutton was at our leadership group meeting this morning and he was at the Cabinet last night. He’s a member of our team. He’s given me his absolute support,” Turnbull said.

A widely watched poll on Monday shows support for Turnbull has crashed to its lowest level since December.

The Ipsos poll published in Fairfax newspapers shows that although Turnbull is still personally more popular than opposition Labor leader, Bill Shorten, support for his Liberal-National coalition fell four points to 45 percent, 10 points behind Labor and enough for a crushing electoral defeat.

Michiel Schaeffer, Science Director at Climate Analytics, a Berlin-based research group, predicted that Australia would eventually toughen climate action. “Against a backdrop of record drought in New South Wales and a very early bushfire season starting, fossil-fuel interests in Australia have again won out over the government moving forward on climate change,” he told Reuters in an email. “Yet despite all this, renewable energy continues to march inexorably forward, especially at state level,” he added. “Ultimately, climate action will be inevitable in Australia.”