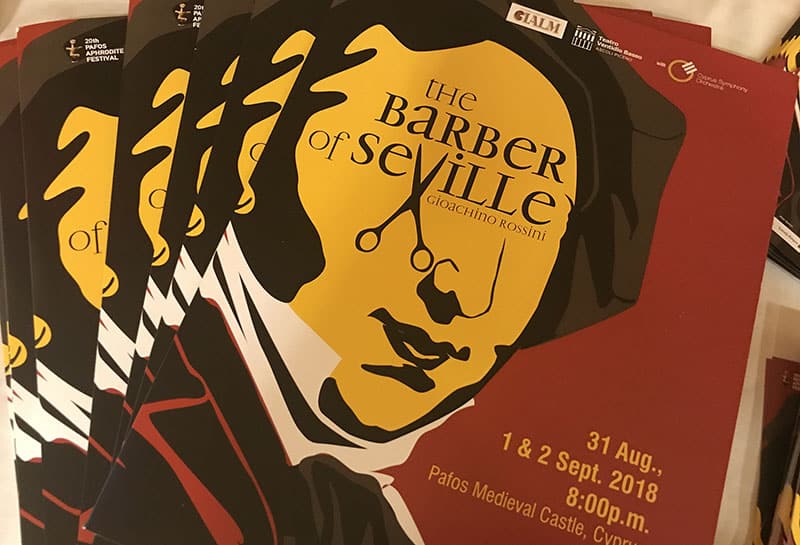 There are six types of opera. But the best-known by far is opera buffa, or comedic opera. Even those of us who don’t know our Britten from our Beethoven can probably name a few examples of the genre: The Marriage of Figaro, possibly even Don Pasquale. But the one we all know, without doubt, is Gioachino Rossini’s delightful comic opera in two acts: Il Barbiere di Siviglia. Or, as it’s more commonly known, The Barber of Seville.

Based on the first of three plays by French playwright Pierre Beaumarchais (Mozart’s ‘The Marriage of Figaro’, composed 30 years earlier, was created from the second part of the trilogy) which revolve around the titular barber, the opera premiered on 20 February, 1816 at the Teatro Argentina, Rome. And the performance was a bit of a disaster to say the least. Apparently, several on-stage accidents lowered the professional tone, and the audience hissed and jeered throughout! Fortunately, the second night was a triumph; the set was fixed and the composer was able to write “on the second evening and all the following performances, they cheered this work of mine with an in­describable fanaticism for which I came out five, six times to receive applause of a totally new kind and that made me cry with pleasure.”

To this day, The Barber of Seville has remained a firm favourite the world over. Which is why the Paphos Medieval Castle Square will no doubt be packed with lovers of opera on August 31, and September 1 and 2. Brought to us courtesy of Italian organisation CIALM – Teatro Lirico Italiano in collaboration with the Ventidio Basso Ascoli Piceno Theatre and the participation of the Cyprus Symphony Orchestra, this opera marks two milestones in operatic history: the 150th anniversary of its composer’s death, and the 20th year of the Pafos Aphrodite Festival.

It’s celebrating two decades of open-air operatic performances with this charming tale of a clever young woman, her eager lover and their resourceful accomplice, Figaro, in a tuneful testament to fun and romance. The plot details the fortunes of Bartolo (a doctor, and the baddie of the piece), Rosina (his niece, a young woman whose inheritance Bartolo hopes to snatch through marriage!), Count Almaviva (an aristocrat who’s fallen for Rosina), and the titular barber, Figaro, who pledges to help the young couple on their path to love.

Okay, so once you get past the potential incestuous leanings of Bartolo MD, The Barber of Seville is a light-hearted romp rife with mistaken identity, lovelorn characters and comic twists. Our young Count will disguise himself as a drunken soldier to win his way into the baddie’s house and the affections of Rosalina – who’s practically a prisoner. That doesn’t work. So he tries again, this time loosely camouflaged as a pupil. This goes according to plan and, when barber Figaro nicks the key to a balcony window, things start looking up. There’s a whole business with a notary who’s called in to actually marry Rosalina to her nefarious uncle, but fortune favours the bold: as Count Almaviva shimmies up the proverbial drainpipe into Rosina’s room…

Well, you’ll just have to watch it and see! The man behind it all – world-renowned Italian director Lev Pugliese – has more than a few surprises in store for his audience, among which is the slight tweaking of a number of characters. “In a time just before the Third French Republic, in a mysterious, fascinating and mellow Seville, Bartolo becomes the impresario, the count a wealthy client, Rosina the jewel in the crown of the show and Figaro ‘il faccendier di casa’, or ‘the factotum of the house.’ How this will play to traditionalists is anyone’s guess, but there’s no doubt that audiences are in for a surprise or two on the night.

Actually, if you don’t start booking your seats from now, you may be in for more surprises than you bargained for! Tickets to the Pafos Aphrodite Festival tend to sell like hot cakes, so grab that phone and get booking… This is opera buffa at its absolute best!

Presentation of the Barber of Seville on August 31, September 1 and 2. For more information and bookings, call 26 822218 or visit www.pafc.com.cy. Tickets start at €25. There will be a simultaneous translation in Greek, English and Russian via subtitles