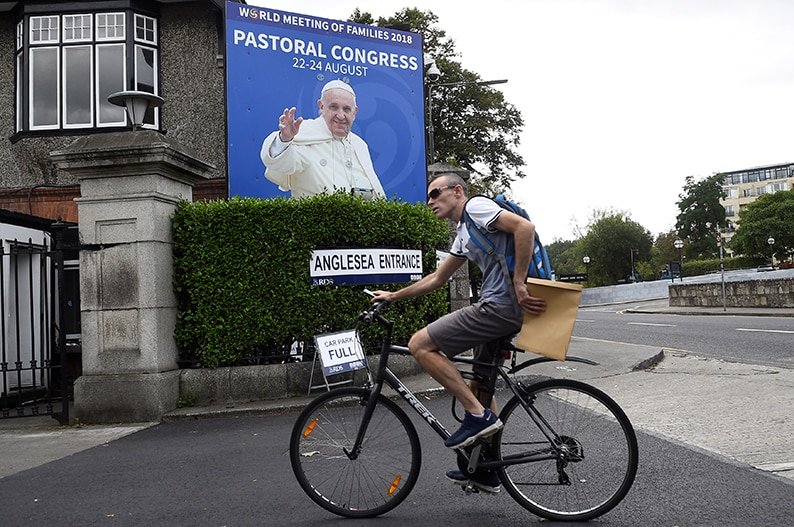 Pope Francis will meet victims of clergy sexual abuse during his trip to Ireland this weekend, the Vatican said on Tuesday, as scandals in several countries mire the Catholic Church in its worst credibility crisis in more than 15 years.

Last week a grand jury in the US state of Pennsylvania released the findings of the largest-ever investigation of sex abuse in the US Church, finding that 301 priests in the state had sexually abused minors over the past 70 years.

The damning US report, combined with scandals in Australia and Chile, have coalesced to form what one Vatican official called “a perfect storm” not seen since the first abuse crisis erupted in Boston in 2002.

On Monday, Francis wrote an unprecedented letter to all Catholics, asking each one of them to help root out “this culture of death” and vowing there would be no more cover-ups.

Spokesman Greg Burke told reporters at a briefing on the Aug. 25-26 trip that details of the meeting would not be announced until after it was over and it would be up to the victims if they wanted to speak afterwards.

This is normal procedure for when the pope meets victims of clergy abuse during his trips outside Rome.

The main purpose of the trip to Ireland, the first by a pope in nearly 40 years, is to close a week-long international Catholic gathering on the theme of the family that takes place every three years in a different city.

Burke said the trip would remain focused on the family but the pope would have many opportunities to talk about sexual abuse.

Once staunchly Catholic Ireland is still reeling from its own clerical sexual abuse scandals, which extended to the treatment of women and girls in the notorious Magdalene Laundries and Catholic-run mother and baby homes.

Some victims of sexual abuse and their advocates said it would be better for the pope, who is spending most of the trip in Dublin apart from a short visit to a shrine in Knock, to have a public meeting with survivor groups.

“What victims of abuse need, and frankly what Catholics and people living in societies that have been so badly damaged by abuse need, is for the Church to tell the truth and to make itself accountable,” said Colm O’Gorman, a victim of clerical child sex abuse and leading campaigner in Ireland.

“And frankly these kinds of meetings that look more like PR exercises are really not helpful,” O’Gorman told Irish broadcaster RTE.

O’Gorman is organising an event for survivors in another part of Dublin while the pope says Mass in a park on Sunday.

“He’ll meet with victims, and he’s done that many times and if it contributes to the healing of those survivors, that’s an important reason to have done it,” said Anne Barettt Doyle, co-director of the US pressure group BishopAccountability.org.

“But it would be more constructive if he also met with the leading survivor groups in Ireland who know the abuse story,” she said.