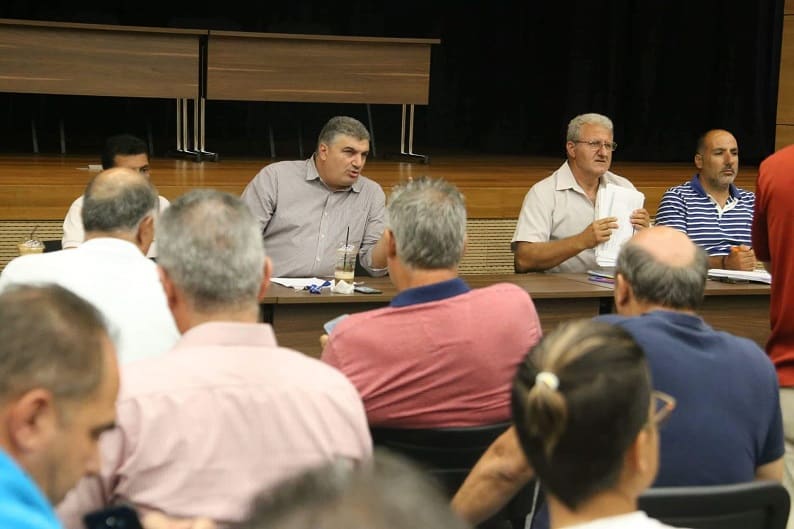 President Nicos Anastasiades is to meet with teachers’ unions on Thursday in a bid to alleviate the crisis in public education following a government decision to abolish a number of benefits, which had led to educators threatening strike measures in September when schools open.

Government Spokesman Prodromos Prodromou on Wednesday expressed hope that teachers would hear proposals during the meeting with Anastasiades that might satisfy them.

“Tomorrow, unions will have the opportunity to hear the thoughts and suggestions by the government, based on the cabinet decisions,” Prodromou said.

He added that Anastasiades had asked to be present at the scheduled meeting of the unions with Education Minister Costas Hambiaouris, “to see how the dialogue is faring.”

The dialogue was relaunched on Wednesday afternoon when unions had separate meetings with Hambiaouris after the first round led to a dead end over unbridged differences.

Teachers submitted to the minister a joint document with their remarks on his latest letter sent to them last week.

In the teachers’ letter, published by Sigmalive, the unions told Hambiaouris that the data presented to them in last week’s memo were inaccurate and misleading and did not present the real picture of the education system. The memo, unions said “is obviously trying to present a fictitious and clearly negative image of the teachers.”

“In order to achieve this goal, it does not hesitate to use untrue and misleading information, to hide other (facts) that do not serve its purpose and finally to make unacceptable comparisons and correlations,” unions said.

The memo, attached to the letter sent to unions last week, cited disappointing data on the level of public education compared to high teacher salaries, fewer working hours than the EU average and higher total expenditure on education.

Unions, citing data of the ministry and international organisations shook off the data presented to them last week on government expenditure in public education, teaching hours, the number of pupils per classroom, and the time Cypriot teachers spend on extracurricular activities.

As regards expenditure, unions said that the ministry failed to mention “the dramatic drop in public spending on education.” In particular, they said, according to the 2017 European Commission’s Education and Training Report, of the 6.5 per cent of Cyprus’ GDP spent on public education in 2013, the figure dropped to 5.7 per cent three years later.

They also said that the education ministry’s budget includes salaries of civil servants, administrative expenses and grants to state universities, the cultural services, the theatre organisation and the Cyprus Sports Organisation and expenditure on primary and secondary education. Payroll for teachers, including those seconded to the ministry with no teaching duties, they said, amounts to 45.2 per cent of the overall budget of the ministry.

On the number of pupils per classroom, unions said that while the education ministry cites in its memo that the EU average is 21 it does not mention its source. Teachers, citing the ministry’s data for 2016, said that the average in secondary education was 21.5 pupils. In its memo, the ministry had said that it was 15.

The unions also said that the ministry did not present accurate data as regards duration of the school year in weeks. The ministry, they said, used data of the Organisation for Economic Co-operation and Development (OECD) from its 2017 Education at a Glance report, in which Cyprus is not included.

The ministry said that primary teachers have 36 working weeks and those of the secondary education 35, teachers said, but taking into consideration the methodology used for member states of the EU and the OECD, “it is clear that the real number of working weeks of educators in Cyprus is 39 for secondary and 38 for primary education.”

The same is true for the average in teaching time in hours, they said. Based on the same methodology, the annual teaching time is 630 hours for gymnasiums and 612 in lyceums, instead of the 511 “misleadingly stated” in the education ministry’s data.

The calculation of these numbers in Cyprus is based purely on teaching weeks, they said, while 60 per cent of the countries taking part in the survey include the exams weeks where teachers carry out multiple tasks.

Unions also reiterated their position, that instead of abolishing exemptions from teaching time, the government could, among other things, reduce teacher secondments to the education ministry, suspend teacher training programmes, transfer permanent teachers who have become superfluous due to lack of interest by pupils in their subjects to other posts, and offer incentives for early retirement.

This will be the second time Anastasiades has intervened since teaching unions came out strongly against the abolition of exemptions from teaching time for extracurricular activities and seniority reasons, following the cabinet decision last month. This led to the agreement for an intensive dialogue between the education ministry and teaching unions Poed, Oelmek and Oltek which faltered earlier in the month.

Spanish players indignant over plans to stage matches in US