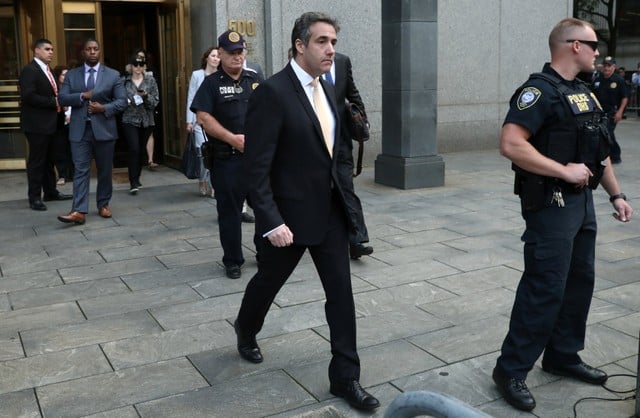 U.S. President Donald Trump’s former personal lawyer Michael Cohen testified on Tuesday that Trump had directed him to commit a crime by arranging payments ahead of the 2016 presidential election to silence two women who said they had affairs with Trump.

Cohen’s voice cracked several times as he pleaded guilty to eight criminal charges in federal court in Manhattan, including tax evasion, bank fraud and campaign finance violations. Facing up to five years in prison, the admissions were a dramatic change from Cohen’s earlier boasts that he was Trump’s “fixer” and would “take a bullet” for the president.

Most legal experts say a sitting president cannot be indicted for a crime, but the Constitution allows Congress to impeach and remove a president from office for “high crimes and misdemeanors.”

Cohen’s accusation increases political pressure for Trump ahead of November’s congressional elections where Democrats are trying to regain control of the House of Representatives and Senate.

Cohen told Judge William Pauley III that “in coordination with, and at the direction of, a candidate for federal office” he arranged payments to two women for their silence “for the principal purpose of influencing the election.”

Cohen did not name Trump in court, but his lawyer, Lanny Davis, said afterward that he was referring to the president.

“Today he (Cohen) stood up and testified under oath that Donald Trump directed him to commit a crime by making payments to two women for the principal purpose of influencing an election,” Davis said in a statement.

“If those payments were a crime for Michael Cohen, then why wouldn’t they be a crime for Donald Trump?” Davis said.

Trump has denied having affairs with the women. His lawyer Rudy Giuliani has said the payments were made to spare Trump and his family embarrassment and were unrelated to the campaign.

Trump did not mention Cohen at a rally in West Virginia hours later.

Giuliani lashed out at Cohen on Tuesday, calling him a “devious little rat” and saying he had a history of lying.

“I think the president is absolutely in the clear,” Giuliani told Reuters. “The Cohen thing is over.”

Ross Garber, a lawyer who has represented four Republican governors in impeachment proceedings, said Cohen’s statement “dramatically increases the likelihood that, were Democrats to take control of the House in the midterms, they would begin an impeachment investigation.”

“The odds of an investigation have definitely gone up,” Garber said.

The Manafort conviction resulted from U.S. Special Counsel Robert Mueller’s investigation into Russian meddling in the 2016 U.S. election and possible coordination with the Trump campaign. The charges against Manafort mostly predate his work on Trump’s campaign.

The probe also led to a referral from Mueller about Cohen to federal prosecutors in New York who began their own probe of the longtime Trump lawyer.

Trump has repeatedly denied any collusion and has called the Mueller investigation a “witch hunt.” Russia has denied meddling in the election, although U.S. intelligence agencies have concluded Moscow interfered. Mueller has also brought indictments against 12 Russian intelligence officers in the hacking of Democratic National Committee emails.

Davis told CNN he believed his client had information that would be of interest to the special counsel, but did not give further details.

Mueller’s investigation, which began in May 2017, has resulted in the indictment of more than 30 people and five guilty pleas.

Our View: Government has recognised oil company deals must be win win