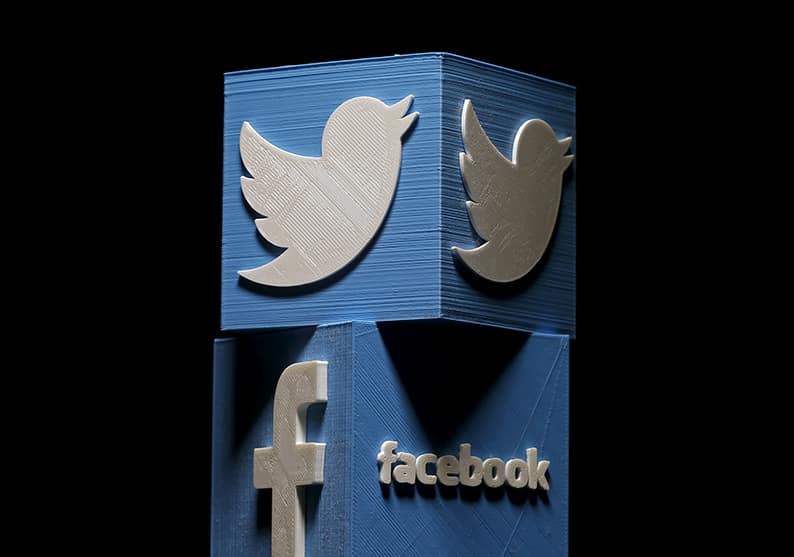 Facebook Inc , Twitter Inc and Alphabet Inc collectively removed hundreds of accounts tied to an alleged Iranian propaganda operation on Tuesday, while Facebook took down a second campaign it said was linked to Russia.

Facebook CEO Mark Zuckerberg said the accounts identified on his company’s platform were part of two separate campaigns, the first from Iran with some ties to state-owned media, the second linked to sources which Washington has previously named as Russian military intelligence services.

Officials in Iran, where it is a holiday to mark the Muslim Eid al-Adha festival, were not immediately available to comment. Moscow has repeatedly denied using hacking or fake social media accounts to influence foreign elections. The Russian embassy in Washington did not immediately respond to a request for comment.

The move by Facebook and others is the latest attempt by global social media giants to guard against political interference on their platforms. It comes as concerns are rising about foreign attempts to disrupt the US midterm elections in November.

The United States earlier this year indicted 13 Russians for alleged attempts to meddle in US politics, but the latest alleged Iranian activity, exposed by cybersecurity firm FireEye Inc, suggests the problem may be more widespread.

“It really shows it’s not just Russia that engages in this type of activity,” Lee Foster, an information operations analyst with FireEye, told Reuters.

The Iranian mission to the United Nations did not respond to a request for comment.

The activity was aimed at users in the United States, Britain, Latin America and Middle East up through this month, FireEye said, and included “anti-Saudi, anti-Israeli, and pro-Palestinian themes” as well as advocacy of policies favorable to Iran such as the US-Iran nuclear deal.

FireEye said the Iranian activity did not appear “dedicated” to influencing the upcoming election, though some of the posts aimed at US users did adopt “left-leaning identities” and took stances against President Donald Trump.

That activity “could suggest a more active attempt to influence domestic US political discourse” is forthcoming, Foster said, but “we just haven’t seen that yet.”

Facebook said the Russia-linked accounts it removed were engaged in “inauthentic behavior” related to politics in Syria and Ukraine. It said that activity did not appear to be linked to the Iranian campaign.

“These were distinct campaigns and we have not identified any link or coordination between them. However, they used similar tactics by creating networks of accounts to mislead others about who they were and what they were doing,” the company said in a statement.

Facebook last month removed 32 pages and accounts tied to another misinformation campaign without describing its origins, but which US lawmakers said likely had Russian involvement.

Microsoft said this week that hackers linked to the Russian government sought to steal email login credentials from US politicians and think tanks, allegations the Russian foreign ministry described as a “witch-hunt.”

FireEye said the US-focused Iranian activity ramped up last year, just months after Trump took office, with websites and social media accounts posting memes and articles, some of which were apparently copied from legitimate US and Iranian news outlets.

In some cases, the domains for the fake websites like “US Journal” and “Liberty Free Press” were originally registered years before the 2016 election, in 2014 and 2013, but most remained inactive until last year, FireEye said.

Arabic-language, Middle East-focused websites appear to be part of the same campaign, the company added.

FireEye expressed “moderate confidence” about the Iranian origins, but said it has not been able to tie the accounts back to a specific organization or individuals.

Hundreds of thousands of people followed one or more of the Facebook pages implicated in the campaign, Facebook said.

Postings cited by FireEye expressed praise for US politicians and other Twitter users who criticised the Trump administration’s decision in May to abandon the Iranian nuclear pact, under which Iran had agreed to curb its nuclear weapons program in exchange for loosening of sanctions.

Some Twitter and Facebook accounts were designed to appear as if they were real people in the US, Britain and Canada, according to FireEye. The accounts used a combination of different hashtags to engage in US culture, including “#lockhimup,” “#impeachtrump” and “notmypresident.”

Facebook said it removed 254 pages and 392 accounts across its flagship platform as well as its Instagram service. Some of the accounts had events and groups associated with them.

The accounts spent about $12,000 to advertise through Facebook and Instagram using a variety of currencies, Facebook said. The company said it had notified the US Treasury and State departments of the purchases, which may potentially violate sanctions.

Become the best you can be at workshop