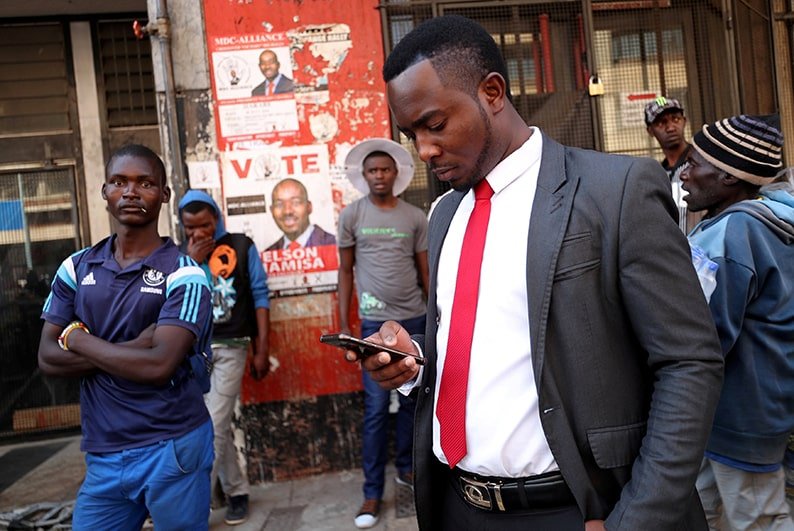 Hopes had been high before the election that it would end Zimbabwe's pariah status and launch an economic recovery, but unrest in the aftermath has left the country deeply divided and brought back uncomfortable reminders of its violent past

Many more around the country were glued to live television coverage of the Constitutional Court hearing to consider opposition leader Nelson Chamisa’s petition that the vote was flawed and should be overturned.

Riot police blocked roads leading to the court in the capital Harare and vehicles carrying water cannon were parked nearby.

Chamisa, 40, says the first vote since the overthrow of Robert Mugabe in November was rigged by the electoral commission. The Zimbabwe Electoral Commission (ZEC) and Mnangagwa say there was no foul play.

The nine judges could throw the case out, declare a new winner or order a fresh election within 60 days.

Wednesday’s hearing has been cast as a major test of the independence of the highest court, whose verdict is final.

Mnangagwa and Chamisa were not at the hearing in person but their lawyers and the ZEC’s faced off in a packed courtroom.

Chamisa’s lead lawyer Thabani Mpofu argued that presidential election results announced by the ZEC were different to those it had submitted in its court papers.

Mpofu said that at the time of the election, the commission had inflated Mnangagwa’s figures by 69,000 votes, urging the court to invalidate the results and trigger a runoff vote.

“There is no evidence brought before the court to substantiate the allegations that have been made,” Mnangagwa’s lawyer Lewis Uriri said in response.

The judges allowed the three to keep working with the team in court. Ziyambi declined to comment when contacted by Reuters.

“The jurisprudential and political burden that weighs heavily on the shoulders of each of the Constitutional Court judges today is that they are about to adjudicate by far the most important case of their legal careers,” Welshman Ncube, a Chamisa ally and constitutional lawyer, wrote on Twitter.

Hopes had been high before the election that it would end Zimbabwe’s pariah status and launch an economic recovery, but unrest in the aftermath has left the country deeply divided and brought back uncomfortable reminders of its violent past.

Mnangagwa has urged Zimbabwe to unite behind him but questions remain over the deaths of six people in an army crackdown on protests against the ruling party’s victory.

Chamisa said this week the court case was only one of the routes he could take “to protect the people’s vote”, and said that if he lost, he would consider peaceful street protests against Mnangagwa.