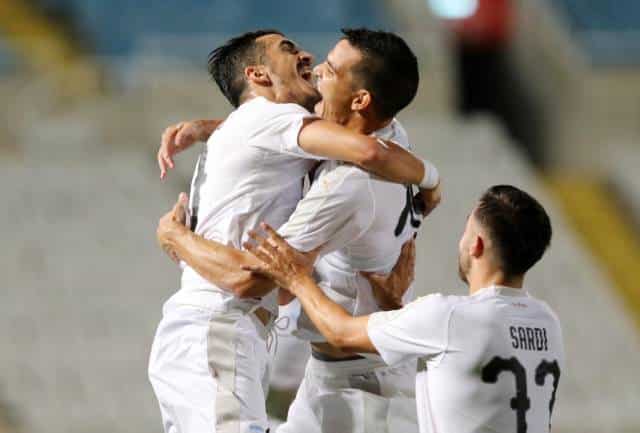 If all three teams manage to progress it will be the first time that three Cypriot teams will simultaneously compete in the group stages of a European competition. Perhaps the biggest threat comes from Swiss side, FC Basel, who take on Apollon at the St. Jakob Park stadium for the first leg

Apoel, AEK and Apollon are just 180 minutes away from qualifying for the group stages of the Europa League.

First though they will have to overcome over two legs, Astana from Kazakhstan, the Slovakian team AS Trenčín and FC Basel from Switzerland respectively in the competition’s qualifying playoff round.

If all three teams manage to progress it will be the first time that three Cypriot teams will simultaneously compete in the group stages of a European competition. Though not an easy feat, it will not come as a huge surprise given the opposition they will face.

Perhaps the biggest threat comes from Swiss side, FC Basel, who take on Apollon at the St. Jakob Park stadium in the first leg.

FC Basel have competed in European competitions every season since 1999 and have qualified for the group stages of the Champions League more times than any other Swiss club – a total of seven times.

Apollon however showed last year that they are not easily overawed and more than deserved the three draws they achieved against Everton, Lyon and Atalanta in the competition’s group stages.

The Limassol team, and their young Cypriot manager Sofronis Avgousti, have what it takes to give the Swiss a side a run for their money.

This will be the third time that Apoel will meet the Kazakhs of Astana in three years and on the two previous occasions, qualification was evenly contested with the two teams having one success each.

Even in the Club World Rankings, Apoel and Astana are separated by just a couple of positions with Apoel ranked 64th and Astana 66th.

Apoel got off to a terrible start in this year’s European qualifying as they were knocked out of the Champions League by unfancied FK Sūduva. Even in their previous victorious tie against Israeli champions Hapoel Be’er Sheva, they found it tough and had to come back from behind to secure their qualification.

Apoel coach Bruno Baltazar will surely call upon Iranian striker Reza to lead the line after his omission from the Be’er Sheva tie due to political reasons, with no other changes expected as midfielder Lucas Soouza managed to shake off a niggling injury that kept him out of a couple of training sessions.

Astana manager Roman Grigorchuk was unable to make the trip to Nicosia due to personal reasons but this should not affect Astana as he will be replaced for the game by his assistant Grigory Baboyan.

Astana are an experienced team who like to boss possession. Their speedy wingers, Τomasov and Pedro Henrique, will pose the biggest threat but their backline lacks pace, something that the Apoel forwards will be looking to take advantage of.

When AEK were drawn against Sturm Graz in the previous round few expected the Larnaca team to progress and even fewer anticipated such an easy passage to the playoffs.

AEK went through 7-0 on aggregate and are now favourites to overcome the rather inexperienced Slovakian team AS Trenčín.

However their spokesperson Kyriacos Demetriou was quick to point out that when a team reaches the playoff stage of a European competition “they cannot be taken lightly” especially after trouncing Dutch giants Feyenoord 4-0 in their last European game.

One thing that AEK’s players will not relish is playing on AS Trenčín’s synthetic pitch, having just one training session to get used to it.