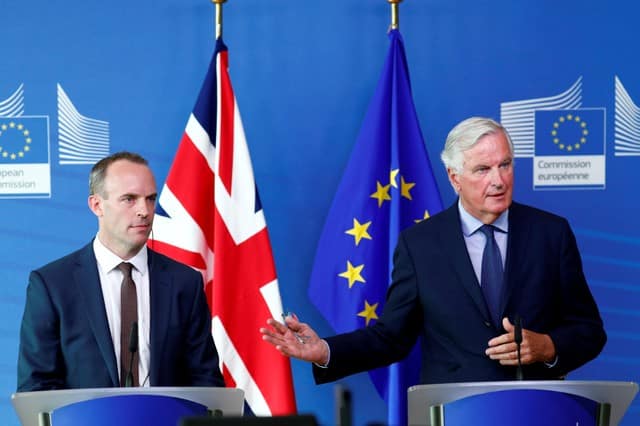 Britons living in the European Union could lose access to their UK bank accounts and businesses on the continent could be cut off from investment banks in London if there is a no-deal Brexit, the British government said on Thursday.

In a document detailing contingency planning if Britain leaves the EU in March with no transition deal, the government said unilateral action on several fronts could only minimise disruption up to a point.

Over a million Britons living abroad may not be able to access their UK bank accounts to receive pensions and salaries, the document said.

All Britons will face higher costs to make card payments in the EU when travelling abroad.

The EU this year agreed to cap the fees retailers pay to process debit and credit card transactions. Without a deal between London and Brussels, the ban on cross-border surcharges would no longer apply.

Britons living in the EU “may lose the ability to access lending and deposit services, insurance contracts,” the document said. “The cost of card payments between the UK and EU will likely increase, and these cross-border payments will no longer be covered by the surcharging ban.”

The government said it was committed to giving regulators like the Bank of England and the Financial Conduct Authority a “general transitional tool” to phase in changes to ease the impact if no deal is agreed.

However, the EU would also need to take action to avoid disruption in cross-border financial services, it said.

“The UK is a major centre for investment banking in Europe,” the document said. “In the absence of EU action, European Economic Area clients will no longer be able to use the services of UK-based investment banks.”

Brussels has said it is primarily up to banks and insurers themselves to prepare for Brexit, such as by opening new hubs in the bloc.

Miles Celic, chief executive of TheCityUK, which promotes the financial sector, said financial firms are focused on continuing to serve customers, whatever the outcome of Brexit talks.

Currently banks, insurers and fund managers in the City of London financial district have unfettered access to the EU, the sector’s biggest export market, under the bloc’s “passporting” rules.

Counterparts in the bloc have similar access to Britain and this cross-border network would be disrupted without a transition deal next March, leaving customers in the lurch.

“Leaving the EU without a deal would cause major inconvenience to millions of pensioners, travellers and drivers,” said Hugh Savill, director of regulation at the Association of British Insurers.

Since Britain voted in 2016 to leave the bloc, financial centres like Paris, Frankfurt, Dublin and Luxembourg have been vying for a slice of the City’s business.

The document said there is a need for the EU to reciprocate British action to ensure continuity in cross-border insurance policies, derivatives contracts, and core market services for companies and people.

“Neither the industry nor the UK can fix this alone. This is a practical issue that impacts customers and clients. It is time for EU authorities to tackle it in that spirit,” Celic said.

The document said that without EU action, businesses across the bloc could no longer use investment banks in Britain.

Brussels, for example, would need to give investors in the EU permission to continue using a share trading platform or clearing house in London.

“If no action is taken by the EU authorities and EU countries, EU securities may no longer be able to be directly settled in the UK,” the document said.

The finance ministry and the Bank of England will give details next month on how customers inBritain can continue using a settlement house in the EU, a critical step whereby cash is exchange for legal ownership of a stock or bond.

Fund managers in the City operate many funds listed in countries like Luxembourg and Dublin, and the plans said Britain was ready to agree cooperation arrangements with the EU as soon as possible to ensure this could continue.

“The stark fact is that there can be no continuity without EU reciprocity. Mutual interest may point to some deal, but the EU holds all the cards,” said Simon Morris, a financial services lawyer at law firm CMS.