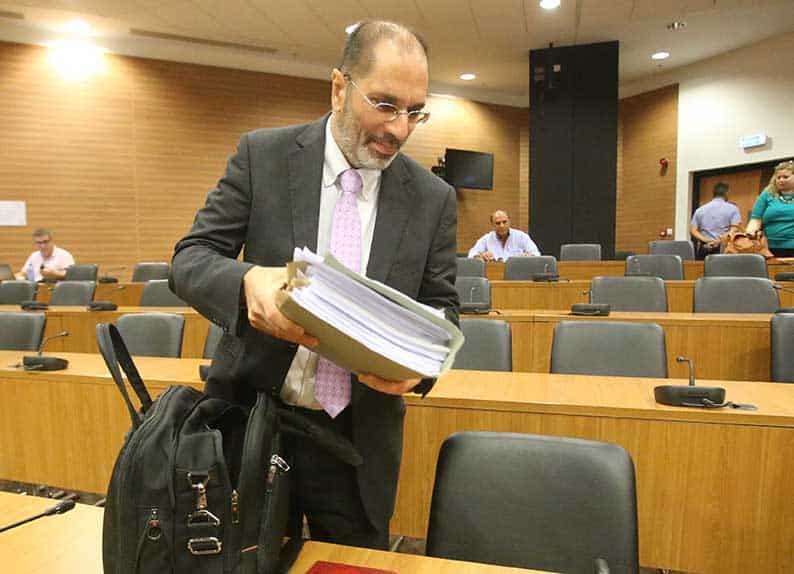 Auditor-general Odysseas Michaelides said on Thursday the finance ministry had done “whatever it could” to prevent an audit of the failed Co-op and had even resorted to “blackmail” and invoking “boogeymen.”

Michaelides who was testifying at the committee appointed by the attorney-general and tasked with investigating the demise of the state-owned lender, which went out of business after it failed to reduce its non-performing loans stock fast enough, said he believed that “they didn’t want us to audit them”.

When the audit office reported on the “irregular” way the bank, bailed out with €1.7bn by the taxpayer, hired its former chairman Nicholas Hadjiyiannis, a childhood friend of Finance Minister Harris Georgiades, as its chief executive officer in 2015, “the reactions increased, even multiplied when the matter was made public,” Michaelides said.

“There was evidence of mismanagement and the way Nicholas Hadjiyiannis was hired as general manager, was blatant and unacceptable”.

“When we attempted in January 2016, to carry out a new audit for (the financial year) 2015, we encountered fierce resistance manifested in various events,” the government’s chief auditor said. “The Co-op and the ministry of finance did everything possible to avert an audit”.

Dionysis Dionysiou, head of the ministry’s unit managing the government’s investment in the bank, said in a note that an audit carried out by Michaelides’ office could be considered a government intervention.

On January 29, 2016, the Co-op, owned to 99 per cent by the government, disputed in a letter to the audit office that the latter had the right to audit it, Michaelides continued.

He said that the Co-op argued that while they would consent to letting in private auditors, it was the Central Bank of Cyprus that was auditing them.

“They should know the difference between the financial audit and supervision well,” he added. “They said that if we carried out the audit, the supervisors would consider this as a problematic intervention of the state in the Co-op”.

“They were trying to elicit an intervention from Frankfurt or from the Commission to keep us out,” he said. “There was a rage; the things they did to prevent us from auditing the Co-op were unbelievable”.

The audit office’s responsibility in auditing the Co-op, since late 2014 jointly supervised by the European Central Bank’s Single Supervisory Mechanism and the Central Bank of Cyprus, derived from the law on fiscal responsibility and fiscal framework of 2014, he said.

Attorney-general Costas Clerides told the finance minister when the latter asked him to opine that “you are asking me to advise on a non-issue,” the auditor said in reference to the dispute that ultimately took the form of an ugly public war of words between the finance ministry on the one side and Michaelides and Clerides on the other two years ago.

When the government’s auditors requested documents from the Co-op to carry out its audit, they only received published financial statements which the bank’s management classified as “confidential,” Michaelides said.

“That was a mockery,” he continued and added that Dionysiou, the finance ministry official, lobbied with communist Akel in favour of two draft bills submitted by ruling Disy, the minister’s party, aiming at stripping the audit office of its responsibility to audit the state-owned bank.

The finance minister, he continued, had an “obsession” to prevent the audit office from going into the Co-op and the handling of the Co-op was “thoughtless and irresponsible”.

The auditor general said that “they” apart from resorting to lobbying, “also created a script that included boogeymen, with a factionary plot involving intimidating scenarios to blackmail the parties that unless they voted in favour of these laws two very bad things would occur”.

The first was that European institutions would impose a hasty merger of the 18 independent credit cooperatives and pressure Cyprus to speed up the privatisation of the Co-op, Michaelides said. He added that documents showed that the plan for a merger of the 18 cooperatives, a step that was completed in early 2017, was drafted in the ministry.

That premature merger, the chief government auditor added, may have been one of the causes that led to the Co-op going out of business.

Dionysiou, he said, proposed in an email to the minister on September 28, 2016, not to adhere to the government’s contractual obligations assumed vis-à-vis the European Commission in exchange for its approval of a €175m supplementary capital injection to force the government go ahead with the merger of the 18 credit cooperatives.

Michaelides criticised the finance minister, for keeping the council of ministers in the dark with respect to the risks spotted by supervisors that highlighted the need for a plan B and additional capital needs, which the supervisors and the European Commission estimated already in 2016 in the range of €500m and €1bn.

“If something was to blame, then it was the worst possible mismanagement,” Michaelides said, adding that while the supervisors had issued timely warnings about the bank’s troubles, the ministry ignored them

Michaelides is scheduled to continue his testimony on Monday.

Also testifying on Thursday, Financial Ombudsman Pavlos Ioannou said that credit cooperatives had resorted to usury practices after they introduced abusive rates about a decade ago.

Ioannou, who issued last year a ruling forcing the Co-op to return more than €111m to overcharged borrowers said the balance of a €300,000 loan could contain up to €100,000 in excessive charges.

Ioannou said that by 2013, the Co-op was already finished and could not be brought back to life while an improved management could have allowed some cooperatives to survive.

A festival to wake us up

Italy threatens to suspend EU funding unless others take in migrants