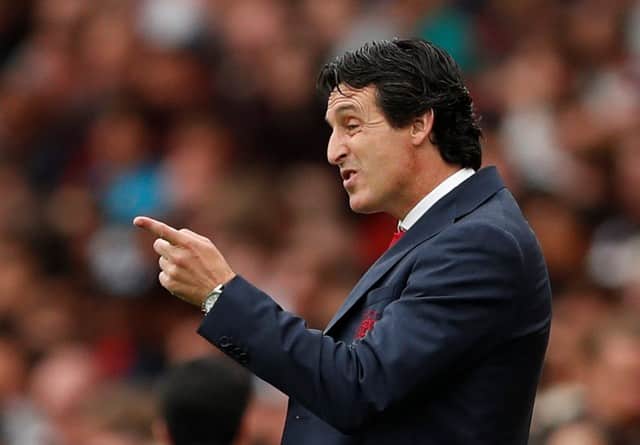 Of the two, Unai Emery has taken on arguably the greater challenge, succeeding Arsene Wenger at a club needing to reassert its top-four potential

When Manuel Pellegrini and Unai Emery were appointed within a day of each other in May, neither could have envisaged that when their teams met for the first time three months later West Ham United and Arsenal would be joint bottom and pointless.

Two games is no measure of a season, and both were handed the hardest possible opening fixture, but their poor starts have given Saturday’s derby at the Emirates an unexpected edge as each scrambles to kickstart a response.

Both managers have arrived with a bagful of experience and trophies with Arsenal boss Emery a multiple Europa League winner with Sevilla and West Ham’s Pellegrini a Premier League champion with Manchester City.

Each can expect the time to ensure they adjust after securing the all-important first win.

Of the two, Emery has taken on arguably the greater challenge, succeeding Arsene Wenger at a club needing to reassert its top-four potential.

Former Arsenal players have a vocal place in the British media and are divided about what they have seen so far from the Spaniard.

Ray Parlour and Alan Smith both praised the way he was quick to make changes in the two defeats, substituting Aaron Ramsey after 53 minutes against Manchester City and Mesut Ozil in the 68th minute at Chelsea.

“That’s a strong statement to make in these early weeks, when everyone is trying to come to terms with the manager’s methods. A lack of accountability, after all, had marred Arsene Wenger’s last few years,” wrote Smith in the Evening Standard on Friday.

“Irrespective of performance, you never got the feeling Ozil would be dropped under Wenger. If fit, the inconsistent playmaker seemed guaranteed a place.”

Under Wenger, Ramsey and Ozil started a combined total of 45 games last season but the arrival of Lucas Torreira from Sampdoria and Matteo Guendouzi, arguably Arsenal’s best player in their first two games, from Lorient has added competition.

The fact that Torreira has not started yet has surprised another former player, Tony Adams, who felt that Emery has presided over two Wenger-like performances, with Arsenal lacking the sort of defensive steel the Uruguay World Cup midfielder was presumably bought to provide.

“I felt so sad about that. Everyone knows what Arsenal have been missing — it’s that steel, that resilience,” wrote Adams in The Sun.

“Whether Emery can coach it or not I don’t know yet, it is early days.”

Such arguments over Arsenal’s midfield will not be lost on former Gunner Jack Wilshere, who will play for West Ham on Saturday after being told in a 15-minute conversation with Emery that he did not feature in his plans after 197 appearances for the club.

Wilshere’s quality has never been in doubt but his poor injury record made a parting likely and he has faced a tough opening to his West Ham career with a 4-0 thumping at Liverpool followed by an embarrassing 2-1 cave-in at home to Bournemouth.

The lack of pace at the heart of West Ham’s midfield, where Wilshere has partnered Mark Noble, has been questioned by pundits and fans.

Pellegrini is likely to be forced into a change on Saturday with captain Noble unlikely to be fit, with Pedro Obiang set to come in.

West Ham spent around 105 million pounds on new players in the close season and Pellegrini said he is unconcerned about the poor start.

“If you review my career, at Villarreal, at Malaga, at Manchester City, the first games that I managed were never good games,” he said, while acknowledging that some of West Ham’s defensive work against Bournemouth had been unimpressive.

Any repeat on Saturday will sharply crank up the pressure.