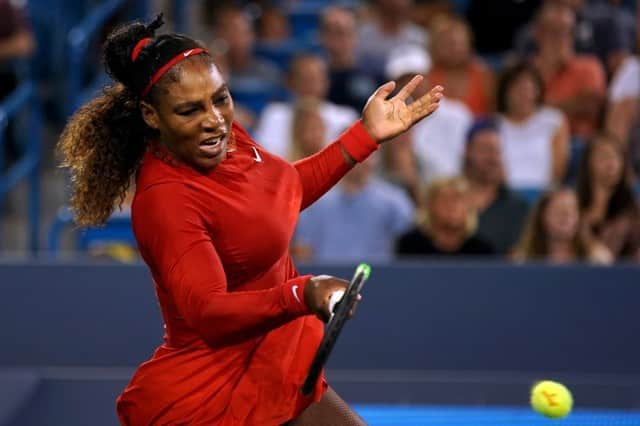 Serena Williams is aiming for a record-equalling 24th Grand Slam title at this year's U.S. Open

* Federer in line to meet Djokovic in quarter-finals

Serena Williams, who is aiming for a record-equalling 24th Grand Slam title at this year’s U.S. Open, was handed a difficult path to the final after being drawn on Thursday in the same quarter as older sister Venus and world number one Simona Halep.

Serena, a six-times champion in New York who is seeded 17th, will start her campaign against Polish world number 60 Magda Linette and could face Venus in the third round before a possible fourth-round showdown with Romanian top seed Halep.

In her last bid to match Australian Margaret Court’s record haul of Grand Slam titles, the 36-year-old Williams, who missed last year’s U.S. Open due to her pregnancy, came up one win shy as she fell to German Angelique Kerber in the Wimbledon final.

Defending women’s champion Sloane Stephens will play Russia’s Evgeniya Rodina in the opening round and could face former world number one Victoria Azarenka of Belarus in the third, Belgian 15th seed Elise Mertens in the fourth and seventh-seeded Ukrainian Elina Svitolina in the quarter-finals.

Five-times major winner Maria Sharapova is in Kerber’s quarter of the draw and could face 10th-seeded Latvian Jelena Ostapenko in the third round, with the winner potentially meeting either sixth-seeded Caroline Garcia of France or Spanish 30th seed Carla Suarez Navarro in the last 16.

French Open champion Nadal could face South Africa’s Wimbledon runner-up Kevin Anderson, the fifth seed, in the last eight in what would be a rematch of the 2017 U.S. Open final.

For Anderson to get that far he would have to navigate a path that could include matches against Austrian Dominic Thiem, Canadian Denis Shapovalov, who last year reached the fourth round, and Sam Querrey.

While Federer, who won the last of his five U.S. Open titles in 2008, is in the same quarter of the draw as twice champion and sixth-seeded Serb Novak Djokovic, the Swiss also has Australian Nick Kyrgios as a possible third-round opponent.

British former world number one Andy Murray, who returned this year after surgery on a hip injury and is playing his first Grand Slam since his run to the 2017 Wimbledon quarter-finals, opens against unheralded Australian James Duckworth.

Should the unseeded Murray advance, he would face Fernando Verdasco or Feliciano Lopez of Spain in the second round before a projected third-round clash against Argentine third seed and 2009 champion Juan Martin del Potro.

The U.S. Open begins on Monday.