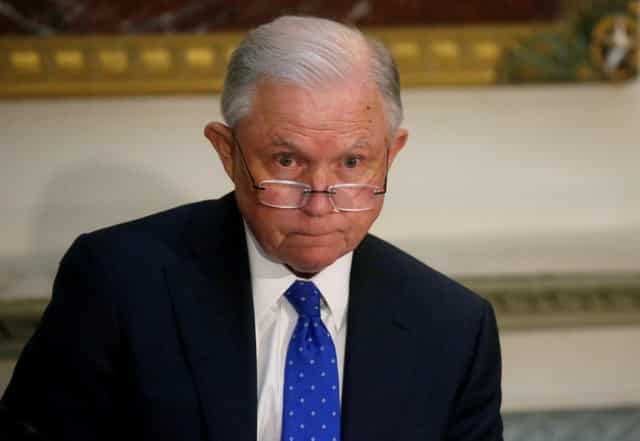 US Attorney General Jeff Sessions takes part in a Federal Commission on School Safety meeting at the White House in Washington, DC

US Attorney General Jeff Sessions fired back at President Donald Trump on Thursday after Trump gave a scathing assessment of his leadership at the Justice Department.

Sessions, a former US senator from Alabama, was one of the first Republican lawmakers to back Trump’s presidential election bid and has implemented his hardline immigration policies in the role of attorney general.

But Trump has repeatedly criticized Sessions for recusing himself from overseeing a probe into Russia’s alleged interference in the 2016 election and whether Trump’s campaign colluded with Moscow. Trump denies any collusion and calls the investigation a “witch hunt.”

“I put in an attorney general who never took control of the Justice Department,” Trump said in a Fox News interview that aired on Thursday. “He took the job and then he said: ‘I’m going to recuse myself.’ … I said, ‘What kind of a man is this?'”

In a rare rebuttal to Trump, Sessions quickly moved to defend himself.

The response sparked new speculation that Trump might fire Sessions, although some senior Republican lawmakers offered the attorney general support.

Senator Lindsey Graham, who is both close to Trump and a defender of Sessions, said he believed Trump would appoint a new attorney general but should wait until after Nov 6 congressional elections, in which Republicans are seeking to maintain control of both the House of Representatives and Senate.

Cohen also said Trump directed him to pay off two women who said they had affairs with Trump, payments that prosecutors say were in violation of campaign finance laws.

‘ALMOST OUGHT TO BE ILLEGAL’

Under pressure over the Cohen and Manafort cases, Trump has renewed his criticism of Sessions and reprised his complaints about the Justice Department and the FBI, accusing them without providing evidence of treating him and his supporters unfairly.

In the interview with Fox News, Trump also criticised the widely used tactic of prosecutors offering lighter charges in criminal cases in return for information and testimony against others.

“It is called flipping and it almost ought to be illegal,” Trump said.

The Washington Post reported on Thursday that Trump had discussed with his lawyers a possible pardon for Manafort but had been persuaded to wait until after the November elections.

A new Reuters/Ipsos poll showed a slight drop in support among Republicans for Trump following the Manafort conviction and the Cohen plea.

The poll, conducted from Tuesday evening to Thursday, found that 78 per cent of Republicans approved of Trump, down from 81 per cent in a seven-day poll that ended on Monday.

Overall, 37 per cent of adults said they approved of Trump’s performance in office – down from 43 per cent in the earlier poll.

Trump’s approval numbers have been relatively stable since he took office in January 2017, when compared with his predecessors, and his popularity has not wavered much among Republicans.

Hurricane Lane menaces Hawaii even though storm has weakened