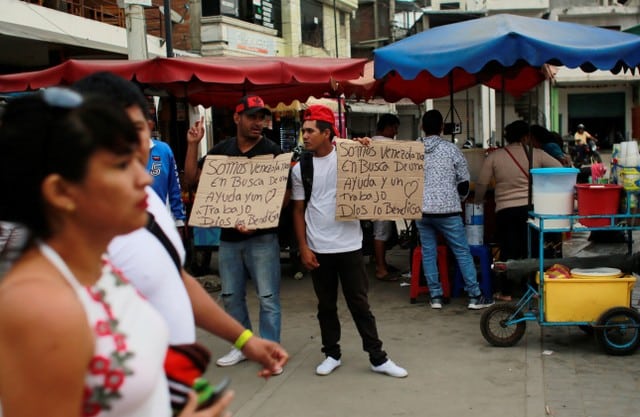 Venezuelan migrants hold signs that read "We are Venezuelans looking for help and a job, God bless you" at the border with Ecuador

The exodus of migrants from Venezuela is building toward a “crisis moment” comparable to events involving refugees in the Mediterranean, the United Nations migration agency said on Friday.

Growing numbers are fleeing economic meltdown and political turmoil in Venezuela, where people scrounge for food and other necessities of daily life, threatening to overwhelm neighboring countries. Officials from Colombia, Ecuador and Peru will meet in Bogota next week to seek a way forward.

In Brazil, rioters this month drove hundreds back over the border. Peru this month tightened entry rules for Venezuelans, requiring them to carry passports instead of just national ID cards, though a judge in Ecuador on Friday rolled back a similar rule enacted there.

Describing those events as early warning signs, a spokesman for the International Organization for Migration (IOM), Joel Millman, said funding and means of managing the outflow must be mobilized.

“This is building to a crisis moment that we’ve seen in other parts of the world, particularly in the Mediterranean,” he told a news briefing.

On Thursday, the IOM and U.N. refugee agency UNHCR called on Latin American countries to ease entry for Venezuelans, more than 1.6 million of whom have left since 2015.

Peru’s top immigration official, Eduardo Sevilla, said Peru will exempt some Venezuelans from the passport requirement, including parents with children seeking to join the rest of their family, pregnant women and the gravely ill.

But Sevilla said authorities would also be vigilant of attempts to evade the new rule by claiming refugee status.

“Is UNHCR going to take responsibility if that person commits a crime?” Sevilla said to Reuters on Friday. “Our priority is to contribute to security and internal order by clearly identifying people.”

UNHCR spokesman Andrej Mahecic said on Friday that governments had made “commendable” efforts even though some reception capacities and services were overwhelmed.

But he said “some disturbing images” had emerged from the region in the past week that risked stigmatizing Venezuelans who had fled and complicating efforts to integrate them.

An Ecuadorean judge, Judith Naranjo, on Friday lifted an order requiring that Venezuelans hold passports to be allowed entry, in response to a lawsuit filed by Ecuador’s state ombudsman together with local human rights groups.

“The judge accepted the request for the precautionary measures requested by the ombudsman,” the agency wrote on Twitter.

Ecuador’s government said it would respect the decision to allow migrants to enter on their Venezuelan identification cards. But it said that the identification cards would have to be accompanied by a “certificate of validation” issued by Venezuela or an international agency recognized by Ecuador.

Ecuador said the measure was intended to protect its own citizens. It did not say when it would take effect.

Venezuela’s information minister, Jorge Rodriguez, said on Friday that a new package of economic measures meant to address hyperinflation would win over Venezuelans who had left the country.

Venezuela on Monday cut five zeros from prices and pegged the country’s currency to an obscure state-backed cryptocurrency. Critics slammed the plan as inadequate in the face of inflation that topped 82,000 percent in July and is expected to reach 1 million percent this year.

“The conclusion is that Venezuelans are going to return and furthermore we invite them to return because we need them for this recovery plan,” Rodriguez told a news conference.