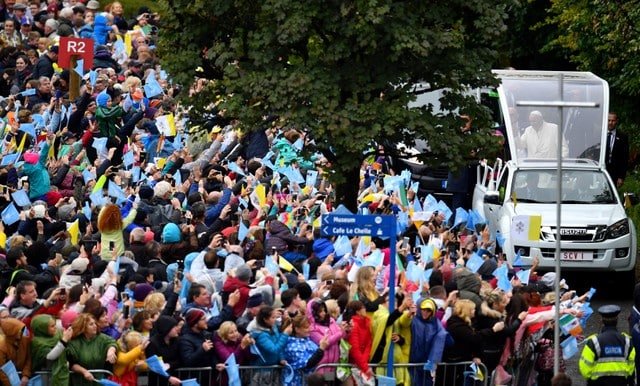 Pope Francis arrives at the Knock Shrine in Knock, Ireland

Pope Francis on Sunday asked for forgiveness for the “scandal and betrayal” felt by victims of sexual exploitation by Catholic clergy as he continued his tour of Ireland where years of abuse scandals have shattered the Church’s former dominance.

On the first papal visit to Ireland in almost four decades, Francis privately met with eight victims of clerical, religious and institutional abuse on Saturday and said he would seek a greater commitment to eliminating this “scourge”.

But pressure on the pope over the issue increased on Sunday when a former top Vatican official accused Francis of having known of allegations of sex abuse by a prominent U.S. cardinal for five years before accepting his resignation last month.

“None of us can fail to be moved by the stories of young people who suffered abuse, were robbed of their innocence and left scarred,” Francis told a crowd of tens of thousands at the Knock shrine in the west of Ireland on Sunday morning.

“This open wound challenges us to be firm and decisive in the pursuit of truth and justice. I beg forgiveness for these sins and for the scandal and betrayal felt by so many others in God’s family,” he said, to applause from the crowd.

Years of sexual abuse scandals have shattered the credibility of the Church which four decades ago dominated Irish society. In the past three years, Irish voters have approved abortion and gay marriage in referendums, defying its wishes.

The dwindling influence of the Catholic Church has been demonstrated by crowds far smaller than those that met Pope John Paul II during the last Papal visit in 1979, when more than three-quarters of Ireland’s population turned out.

Francis, facing sexual abuse crises in several countries, wrote an unprecedented letter to all Catholics last week asking each one of them to help root out “this culture of death” and vowing there would be no more cover ups.

Some of those who turned out on a misty morning in Knock, where a group of locals in 1879 said they saw an apparition of the Virgin Mary, said Francis should be given a chance to deal with the abuse issues that have rocked the Church for decades.

“People have to give this man a chance, he’s trying his best,” said Carmel Lane, who travelled from County Longford in the Irish midlands to attend the Mass.

Vatican officials on Sunday declined immediate comment on an 11-page letter given to conservative Roman Catholic media outlets in which Archbishop Carlo Maria Vigano said he had told Francis in 2013 that Cardinal Theodore McCarrick had faced extensive accusations of sexually abusing lower-ranking seminarians and priests.

McCarrick became the first Cardinal in living memory to resign his position in the Church leadership after a review concluded that allegations he had sexually abused a 16-year-old boy were credible.

McCarrick has said that he had “absolutely no recollection” of the alleged abuse of the teenager 50 years ago but has not commented on the other allegations.

One survivor of clerical abuse who met the pope on Saturday, Paul Redmond, said strong language used by Francis at the meeting gave him hope that something might be shifting in the Catholic Church.

But others who took part in sporadic protests around Dublin on Saturday were not convinced.

“I don’t think he should come and expect us to pay for his visit when there are people today in Ireland who are so damaged and need so much help that they can’t function because of all the abuse,” said Lisa, 30, who declined to give her family name, as she waited with other protesters for the Popemobile to pass.

“He shouldn’t have come.”

Teachers rejected the results of their own negotiations, minister says

Diary of a cancer patient