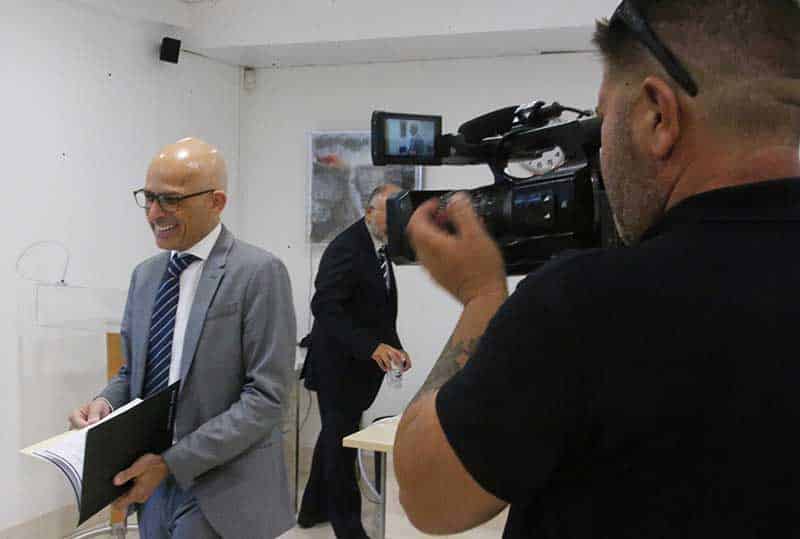 Laughing all the way to the bank: Hellenic's Yiannis Matsis at the AGM to accept the government's gift

WAS THE collapse of the Cooperative Central Bank (CCB) a well-plotted conspiracy aimed at boosting the size of Hellenic Bank? This is what a skettos-drinker from Limassol who visited our establishment last week insisted, claiming that the appointment as CEO of the inept Nicholas Hadjiyiannis, whose knowledge of banking was pretty limited, was part of this sinister plot.

Our establishment loves a crazy conspiracy theory but this one seems so far-fetched that it has not even been repeated by the Akel disinformation service, which specialises in uncovering imaginary plots by greedy capitalists. This could be because nobody has suffered from the gifting of the CCB’s healthy business to Hellenic, apart from the taxpayer, and the evil capitalist plot idea is more difficult to sell.

The depositors of the CCB lost nothing and more than half its employees will remain in work while the thousand that volunteered to quit will be very generously compensated, many receiving a 180 grand pay-off. Even the many thousands that refused to repay their loans are happy, because responsibility for the debt collection will fall on a state company that is certain to do nothing. In short, everyone is happy.

The Cypriot taxpayer may be entitled to feel aggrieved about the €5 billion-plus wasted on the CCB’s collapse and the billions of NPLs the state will not collect but he never complains, being perfectly happy seeing incompetent and corrupt politicians squandering his moollah and building up his debt.

THE CONSPIRACY theory, despite being shunned by the commies, does have its merits. If anyone actually wanted the CCB to collapse appointing a clueless nobody, who saw the post of CEO as the dream ticket to the high social status he yearned for and the big pay package no normal business would have paid him, was a masterstroke.

This was a guy who would do everything in his power to hold on to his dream job – magnanimously handed to him by his bosom buddy, Finance Minister Harris Georgiades – like insisting at every opportunity that the bank was doing smashingly well, meeting its targets, dealing with NPLs and on track for its stock market listing!

And while he was disseminating all this happy news and posing as the banking big-shot that would save the bank of the proletariat, the CCB was sinking deeper into the shit. The smooth-talking Hadjiyiannis may have fooled many people in Kyproulla, but his slick salesman’s skills did not have much effect in Frankfurt, where the ECB’s technocrats were not impressed with what he was telling them and much less so with the figures he presented them.

After meeting Hadjiyiannis and looking at the CCB’s figures, the alarmed ECB technocrats would demand more buffers imposed at the bank because they feared the worst. Harris mentioned at some point that plans for the CCB kept changing because Frankfurt kept upping capital requirements, but it did not seem to cross his mind that his buddy’s ineptitude may have had something to do with this.

IF WE ACCEPTED the conspiracy theory, it would mean that Harris was also involved, something that is impossible to believe. He is not that sort of guy. He may have shown human weakness in wanting to give his loser friend an important role but there is no way he appointed him CEO in the belief that he would cause the collapse of the bank and lead to its takeover by Hellenic.

His weakness was also illustrated in his failure to have Hadjiyiannis removed after it became apparent that the guy was a liability and ECB wrote to the government advising the replacement of the CCB board.

An indication of Hadjiyiannis’ cluelessness was that he set up an international business unit (IBU), deluding himself that foreign companies would take their custom to a state-owned bank on the brink of bankruptcy. He also developed a mobile app for banking, aware that 90 per cent of his customers did their business over the counter and were more likely to repay their loans than use a phone for their banking.

THE MIGHTY and fearless Odysseas also added his weight behind the conspiracy theory when he appeared before the investigative committee looking into the collapse of the co-ops on Thursday. He also put the boot in, telling the committee “there was evidence of mismanagement and the way Hadjiyiannis was hired as general manager was blatant and unacceptable.”

He blamed the “worst possible mismanagement” for the collapse and censured Harris, with whom he has a past, for covering up the CCB’s problems, ignoring the advice of the European Commission and keeping the council of ministers in the dark. Of course, Odysseas had to be at the centre of his testimony, implying there was conspiracy against his noble efforts to save the CCB.

He talked a lot about the finance ministry’s efforts in 2016 to prevent him from carrying out an audit of the CCB. “The Co-op and the ministry of finance did everything possible to avert an audit,” he said, claiming they “were trying to elicit an intervention from Frankfurt or from the Commission to keep us out.”
The finance minister had a “fixation” with preventing an audit, said Odysseas, before going into the dirty tricks the ministry resorted to in order to keep him out of the CCB, an objective it achieved. Would the collapse have been avoided if the virtuous Odysseas carried out an audit, or would it have been brought forward? Nobody knows.

WHAT is certain is that Odysseas, who will continue his tour de force before the committee on Monday, has given a few more arguments to the conspiracy theorists.

Akel deputy Eleni Mavrou indicated that the party of the proletariat may eventually embrace the conspiracy theory. Speaking on Wednesday, after the Hellenic Bank AGM approved the increase of capital that would allow it to accept the government’s gift of the healthy part of the CCB, she said: “Today signals the end of an era for the co-op movement. The start of the procedure of the absorption of the operations of the CCB by Hellenic Bank completes one of the biggest financial crimes ever experienced by the country.”

She was not referring to the financial crime of giving out loans on the back of worthless collateral and never demanding their repayment that contributed more than Hadjiyiannis to the collapse of the co-ops, because that was banking with a human face.

PREZ NIK may have bent over backwards at Thursday’s meeting with teaching union bosses in the hope of averting Tuesday’s planned demonstration by teachers outside the presidential palace but his climb-down did not have the desired result.

Even though the compromise proposal was drafted in consultation with the union bosses, after a three-hour meeting at the palace, the members of all the unions rejected it on Friday, clearing the way for the demo and strike measures at the start of the school year. The snub was a bit of an embarrassment for Nik who likes to pose as the wise mediator and great unifier.

The teachers’ rejection of the deal may have also been a snub of their self-serving union bosses who had got what they wanted out of the deal. Two officials from each of the three unions would carry on being completely exempt from teaching (in the government’s original decision they were obliged to teach and carry out union work outside school hours).

The government also offered to pick up the bill for teaching cover for other union officials that had to leave their classes for important union work such as organising strikes and demonstrations.

UNION bosses had to put a noble, idealistic spin on their uncompromising stance. Poed boss Fylios Fylaktou, who has such faith in public schools he sent his kids to a private school, gloated about the fact the government had offered more money to get the teachers on side but failed. “They gave us financial benefits we had not asked for,” he said sanctimoniously.

Fylaktou tried to make the most of the fact that, for once, pay was not the main consideration of teaching unions. On his Facebook account he posted the following: “the struggle is not about money… WE CANNOT BE BOUGHT.” He was right, the struggle is for teachers to have as few teaching hours as they can get away with, while still being paid for a full week’s teaching.

It’s not about the money, but the easy working life.

THE UNION of Cypriot Refugee Clubs of the UK issued a fire and brimstone announcement last week to mark the black anniversary of the completion of the second phase of the Turkish invasion of Cyprus. The clubs expressed their frustration at the continuing occupation and their rage at the tolerance shown by the powerful of the earth to Turkey’s ongoing violation of international law and human rights.

They also “censure the pro-Turkish policy, as a rule, of Britain.” They called “on the Cyprus government not to accept the fait accompli of the invasion, to strengthen its defence, even at the 12th hour and to take dynamic action against companies that unrelentingly, illegally exploit the properties of refugees.”

Nowhere in the announcement did the patriots of the refugee clubs offer to return to their motherland and volunteer to join the National Guard so that our defence is strengthened, even at the 12th hour, and they can help their brothers return to their homes. This could be because a war of liberation conducted with brave words, uttered 2,000 miles from the frontline is much more effective in ending military occupation.

The only remaining option

Our View: Government needs to fight to take back control of education