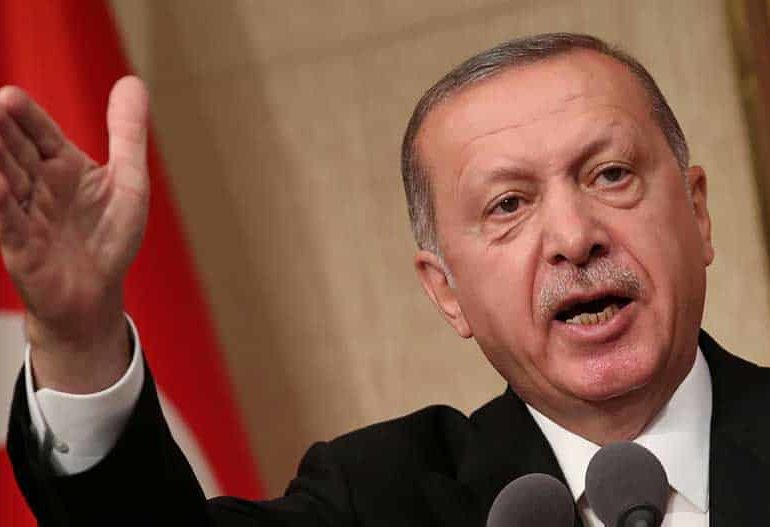 There is an unpredictable president in Turkey

THE LAST time I was in a storm at sea was on a trip from Haifa to Larnaca on the steam ship Enotria of the Adriatica line in 1972. I was a poor student travelling steerage from Venice to Larnaca. In those days the Enotria and her sister ship Mesapia called at Haifa first before heading for Larnaca.

We had just left port when we hit upon a storm the like of which I never experienced before or since. It was relentless and as I could not sleep I went up to the bridge where I saw the captain at the helm. It was reassuring but it sent a shiver down my spine: why was the captain on the bridge at two in the morning I thought? The Enotria pitched and rolled until dawn when the storm subsided as we approached Larnaca.

In today’s configuration we had sailed through the exclusive economic zones (EEZs) of Israel and Cyprus and the storm metaphor has not been lost on me.

Part of the problem is that the word exclusive is misleading and apt to induce oceanic nationalism in some people. Freedom of navigation is not affected by EEZs. What is exclusive is not the sea but the sovereign right of coastal states to exploit their natural resources.

The exploitation of the seabed and subsoil for hydrocarbon deposits in the eastern Mediterranean was not a practical proposition at the time of my crossing in 1972.  Golda Meir, Israel’s prime minister at the time, even joked about lack of oil in Israel: ‘Let me tell you something we Israelis have against Moses: he took us 40 years through the desert to bring us to the one spot in the Middle East that has no oil’ – although given his ability to part the sea, if any one knew anything about seabeds it was Moses.

Personally I could not care less about the gas that lies beneath the seabed except if it can finance a proper a National Health Service. It causes wars, monopolises economies and makes obnoxious bores of people whose countries are exclusively dependent on hydrocarbon wealth.

It was thought the discovery of gas would serve the cause of peace in Cyprus but it has made things worse and the gathering storm I spy on the horizon is partly gas driven.

Iran has reached the Mediterranean and the US and Israel are gearing up for an attack. The Turks are fighting the Kurds in northern Syria and the Americans are fighting with the Kurds against ISIS.

The Israelis attack Syria and Gaza at will, and France Britain and the US as and when their sensibilities are offended by chemical attacks – real or imagined.

The Russians have bombed the rebellion in Syria into submission except at Idlib near the Turkish border where a final showdown is imminent.

In Cyprus there is much pent up aggression in nationalist circles that could easily tip over, although most people bury their heads in the sand hoping for the best.

The omens are not good either. Kofi Annan the former UN General Secretary died last week. He was a good man with a soothing voice that suited his role as the UN’s top diplomat.

Alas his plan was rejected by the Greek Cypriots in 2004 – though it was his skills as a diplomat that enabled Cypriots to vote on their political problem in a referendum.

The next bad omen is that the US President is on the verge of impeachment. His predicament evokes memories of president Richard Nixon in 1974 and the failure of his moribund administration to prevent the Cyprus catastrophe.

Finally, there is an unpredictable president in Turkey. Last year he sent war ships to intercept an Italian drilling vessel, and it is fascinating to speculate what he might do if ExxonMobil starts drilling later this year in Cyprus’ EEZ if the current climate of tension between US and Turkey continues.

So what to do? Solve the Cyprus problem. But how? It is obvious that any permutation of the Annan plan, including the Guterres framework, is doomed to fail. Rightly or wrongly the majority community does not want such plans.

The Annan plan was a skillfully crafted blend of the positions of the parties over the years with a lot of input from the EU. The political reality, however, is that what the Greek Cypriots really want is majority rule in a sovereign state with the return of as much territory as possible without Turkish guarantees.

The Turkish Cypriots are not prepared to give up joint sovereignty under the 1960 independence treaties and are not prepared to return land and property occupied since 1974 absent a settlement. For them the status quo needs to change so they are no longer ostracised by lack of recognition of their breakaway state.

The status quo is that the whole territory of the Republic of Cyprus is recognised internationally whereas the UDI by the Turkish Republic of Northern Cyprus in 1983 was condemned as illegal by the international community.

The rights to the territorial waters and exclusive economic zone (EEZ) appurtenant to the territory of Cyprus are entrusted to the government of the RoC. The present government of the RoC does not include Turkish Cypriot participation which is not in line with internationally guaranteed constitution of Cyprus – but that’s another story in which the arguments cancel each other out.

As individuals, Turkish Cypriots are EU citizens by virtue of their automatic citizenship of the RoC entitled to equal treatment within the territories of all member states of the EU including Cyprus, a state of affairs they treasure.

The aim of diplomacy should now be to find a way forward within the confines of EU law under a single sovereignty that people would support. Given the European legal order is suspended in areas not under RoC control in northern Cyprus, a new approach could be to start negotiations on the terms on which the suspension can be lifted in those areas and thereby resolve the Cyprus problem en passant, rather than continue flogging a dead horse.

Obviously, the government of the RoC would be in the thick of it but the context would be very different as the EU would move to centre stage. And another thing: in the end the EU always finds a compromise.

The only remaining option