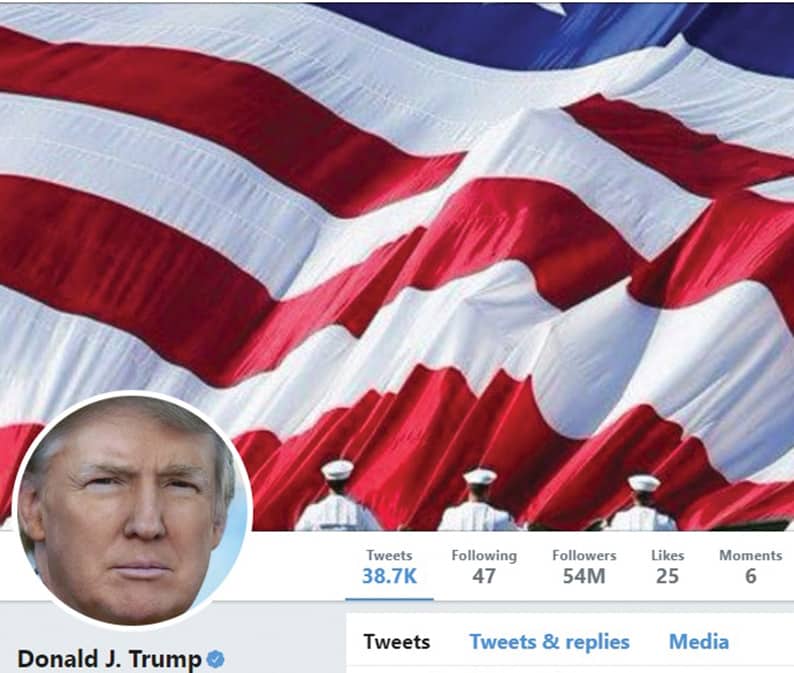 IN SOCIAL encounters, what we say and do provides components and indicators of who we are and how others perceive us to be. Since his inauguration on 20 January 2017 to the 21 August 2018, US President Donald Trump has transmitted, via Twitter, an incredible 4,440 messages to the world and claims 54 million followers.

I have scanned through his tweets in the period to understand Donald Trump the person; to gain a better insight of his world-view perspective and his self-concept; how he thinks, conceptualises and theorises about policy and social issues.

His tweets appear to have a regular pattern whereby he goes into a frenzy of communications between 05.00-09.00 hours, slows down mid-day and picks up again between 15.00-18.00 hours to slow down thereafter until late.  On average, he writes 233 tweets per month.

His world-view is one of ‘either you are with me or you aren’t’.  He conceptualises the world as an organised conspiracy and a carefully orchestrated witch-hunt that is out to discredit him. His communications are loaded with vitriol and sarcasm (about anyone questioning him) or praise (for himself, his policies and those who stand by him).

By and large his main preoccupation is with policy issues (domestic and foreign) and how he is the one putting things right:  from creating jobs, dealing with terrorism, migration, world trade, successful overseas visits to making others respect America again.  The media: where he selectively attacks particular sections such as CNN, ABC, NBC, New York Times and Washington Post, accusing them of spreading fake news whilst upholding and praising the values of those, such as Fox News, for being supportive and fair to him. Personal attacks:  on institutions, individuals and states (e.g. the FBI, Special Prosecutor Robert Mueller, the attorney general, previous Presidents, politicians – Republicans and Democrats – heads of the business community, the EU and so on).

His vocabulary in describing and attacking others is rich in adjectives and nouns:  ‘dumb ‘, ‘idiots’, ‘stupid’, ‘terrible’, ‘weak’, ‘dishonest’, ‘incompetent’, ‘thugs’, ‘fools’, ‘pathetic’, ‘losers’, ‘morons’, ‘racist’, ‘clowns’, ‘low life’, ‘sleazebags’, ‘clueless’, ‘crooked’ and more. But on him, the opposite descriptions are applied in equal abundance. He is the protector of free speech; he is the only one who knows how to be President; he is the one who has the most respect for others; he is the one who is putting America back on the map again; he is the one who is bringing jobs back to America. In summary, he is the one for everything and the best thing that has happened to America and the universe.

His vain perception of himself is perhaps best captured by two tweets prior to his inauguration. ‘Sorry losers and haters, but my I.Q. is one of the highest – and you know it!’ (8/5/13).  And then, as if to round up the statement, he adds, ‘Many people have commented that my fragrance, “Success” is the best scent & lasts the longest…’ (27/2/13).

The President’s words and utterances, which incidentally do link up with his actual policies or attempted policies, do not create a positive personal portrait.

Overall, he presents as a weak and vulnerable person who shoots in all directions. The workload and complex nature of the responsibilities he carries appear to overwhelm him to the point that everything becomes deeply daunting and personal. He is suspicious and fearful of being found out that he possesses limited abilities, insights and knowledge about the social and political world around him. In the process, he compensates by exhibiting characteristics of narcissism.  He loves himself and he is wounded when others fail to love him in similar quantities. He has the mind of a spoiled but vulnerable child trapped in a perplexing world and who finds it difficult to cope with rejection.

In trying to cope, his defence mechanisms become primitive. By presenting his stereotypical and atypical world-views he wonders why others fail to understand him at all. His explanation for others not to like him is that they are adversaries, idiots, subversives, envious, inadequate or frauds. He is comfortable with that interpretative but abrasive approach because it shields him from facing the truth.  He stands alone, firmly stuck on his world-view and repeats himself time and again to make believe that he is right and everyone else is wrong.  He hides behind the constant ridicule he unleashes on others and in the safety of his own entrenched views by being arrogant, dismissive, offensive and inflexible.  He is good at calling others names and using derogatory codes and expletives against them but cannot fathom anyone telling him he is wrong or that there are alternative world-views to consider.

The President, by speaking disparagingly of policies, events or individuals he does not understand or agrees with;  or by displacing his fire of blame on others to cover his tracks; by causing confusion; and simultaneously by exonerating himself from any blame,  acts like the fox in Aesop’s fable of the fox and the grapes. The fox, driven by hunger, attempts to reach a bunch of ripe grapes, hanging high up from a vine that trained along a tree, but fails.  Walking away sulking and in misery, the fox – unable to face the truth – remarks in contempt that the grapes are not worth the effort: ‘they are sour’.

Trump, the man, presents as a lonely figure in an intricate web of political treachery and interests that he cannot basically cope with. He finds solace in his private world which he expresses in his tweets. His tweets are essentially a cathartic expression of guilt, fear, denial, anger, regret, envy and blame that help him through the day. It is his way of letting ‘steam off’. He may not be lying on the therapist’s couch,   but he is exploring and outpouring his personal issues, battles and demons. He knows that his excursion into the public domain of politics by seeking the Presidency and becoming the President has proved a flawed and personally regrettable decision.  His personal life and weaknesses are in the open.  They have become a public property from which there is no escape.

The result of all these theatrical but highly consequential presentations embedded in carefully crafted camouflage spirals may in due course hurt the man and the Presidency. Since entering political life, instead of engaging himself with serious policy, he has created his own vortex and has been sucked into a whirlwind of politics that is beyond him.  He is in real terms, out of his depth.

Presently, he is under siege from all sides including his own once loyal inner circle of appointees who vowed to take a bullet for him but who are now, one by one, selling out and entering plea bargaining to save their own skin to the detriment of their ‘Boss’. His grassroots populist supporters may stand by him but for how long and at what cost is another question.

As I have suggested on previous occasions, the outcome for this man and his immediate social circle, sad as it is, may prove disastrous.  Unfortunately, as US President, his personal misfortunes are also other peoples’ misfortunes.

Andonis Vassiliades is an Emeritus Professor