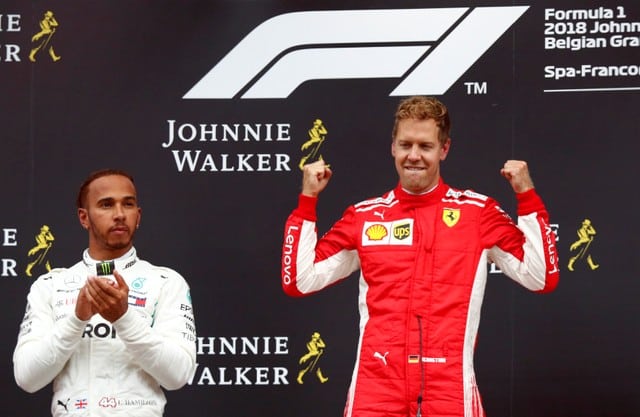 Hamilton, last year’s winner in Belgium, again started from pole position after a wet qualifying but his Mercedes could not match the German’s pace in the dry and he had to settle for second.

In the enthralling battle between the four-times world champions, Hamilton now has 231 points to Vettel’s 214 with both on five wins apiece for the campaign.

“I had a great start, I’m not sure Lewis saw me as he pushed me to the left in the first lap,” said Vettel of his decisive pass on Hamilton on the Kemmel straight after the title frontrunners had made clean getaways.

“As soon as I was ahead I relaxed. I had a good restart after the safety car, and after that it was a very smooth race,” he added.

The first corner otherwise provided the main drama, with Fernando Alonso’s McLaren flying over Charles Leclerc’s Sauber at the La Source hairpin after being rammed by Renault’s Nico Hulkenberg.

All three retired as the safety car was deployed for four laps but Leclerc had reason to thank the ‘halo’ head protection system — introduced this season — for allowing him to step away unscathed.

Television close-ups after the race showed the structure heavily marked by the impact.

“We can end the HALO discussion now. It will save lives,” tweeted 2016 world champion Nico Rosberg after seeing the images.

Ferrari’s Kimi Raikkonen, a four-times winner in Belgium, and Red Bull’s Daniel Ricciardo also collided at the start and retired after pitting, the Finn having to wait for his 100th career podium.

Vettel had an untroubled afternoon once the safety car returned to the pitlane and took the chequered flag 11.0 seconds clear of Hamilton.

“He drove past me like I wasn’t even there on the straight,” said Hamilton, who was quick to shake his rival’s hand and offer congratulations.

“They have got a few trick things going on in the car,” he added. “I did what I could, we did what we could so we have to keep working.”

The Briton later clarified his remark to emphasise that he was not questioning the legality of the Ferrari.

BEST OF THE REST

The victory was Vettel’s 52nd, sending him ahead of French four-times champion Alain Prost on the all-time race winners’ list.

Force India began their existence under new ownership with a haul of points that lifted them immediately off the bottom of the standings.

The team, who had started with all their constructors’ points taken away following confirmation as a new mid-season entry, had Mexican Sergio Perez fifth and Frenchman Esteban Ocon sixth.

“To be ‘best of the rest’, with Esteban right behind me, is the most we could have done,” said Perez.

“We have scored some important points for the team and sent a strong message for the next few races. It’s a nice start of a new era for the team.”

Watford and Chelsea maintain their perfect start to the season