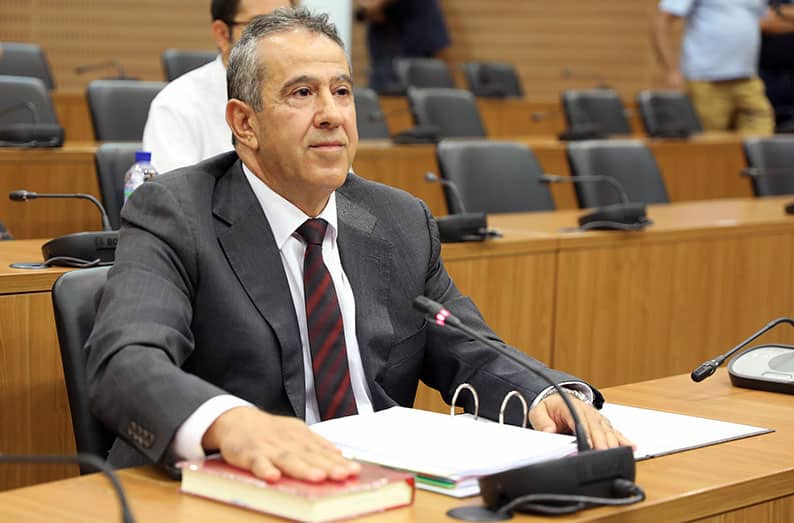 Panayiotis Philippou, a former board member and chairman of the board of directors, testifying on Monday

A former co-op official said on Monday that Cyprus’ political elite discouraged reforms in the co-operative banking sector because local co-ops were controlled by political parties which allowed them to operate for years without complying with minimal corporate standards.

This control reflected the leverage of the political parties in local communities, said Panayiotis Philippou, a former board member and chairman of the board of directors, according to the Cyprus News Agency.

Philippou was testifying before the committee appointed by Attorney-General Costas Clerides to probe the breakdown of the state-owned Cyprus Co-operative Bank into which taxpayers pumped €1.7bn in the form of two capital injections in 2014 and 2015.

The co-op supervisor — until 2013 the Authority for Supervision and Development of Co-operative Societies (ASDCS) — showed leniency towards the increasing problems the co-ops were facing, he said. Co-operatives that were not operated by members of professional groups lacked strict rules while exemptions from breaking the rules were common.

Philippou singled out the co-ops of Polemi, Stroumpi, Achna and Ayia Napa in particular.

The problems at the co-op, he continued, could not be resolved because it was impossible to fire the secretariat or the board of a co-operative.

When in 2008, 118 independent co-operative credit institutions came under the “Central Agency”, giving them a lender of last resort, most of the co-operatives had practically little if no structures to internally monitor their operations, he said.

Every year, the Co-operative Companies’ Audit Service included all these irregularities in its reports filed to the ASDCS and the respective minister of commerce, in charge of the co-op’s affairs, before the latter forwarded them to the parliament’s (commerce) committee, Philippou said. He added that he believed that past ministers of commerce were aware of the situation.

Decisionmakers carried out a merger in 2012 to 2013 which ultimately reduced the number of co-operatives from 118 to 93, in order to cover up mismanagement, he said and named as an example the Ayia Phyla co-operative which was rocked by the revelations of a fraud case three years ago.

In some cases, co-operatives even extended loans to dead persons after they were presented with forged ID cards, he said.

While co-operative banks serving specific professional groups had a lower non-performing loans ratio, they were forced to merge with other co-operatives to reduce the average ratio which ultimately meant that they too fell victims to the overall mismanagement, he said.

Philippou said that in 2012, when Cyprus requested an international bailout caused by a combination of undercapitalised banks, an exploding deficit and recession, and the co-ops (equity) deficit was estimated in the range of €1bn to €2.5bn, there was no willingness in the bank to put reforms forward while some were proposing promotions.

Philippou said that he returned to the co-op in 2015, three years after leaving out of love for the bank and in order to contribute.

Another member of the board, Gregoris Maliotis, who served from June 2010 until October 2013, also testified at the committee on Monday. He said that co-operative credit institutions operated completely independently and uncontrolled while reports prepared by the Central Co-operative Bank had no effect.

According to the CNA, Maliotis said that while it was unclear who was in charge of imposing penalties in cases of irregularities, there was also a secret agreement and unwritten law of not subjecting the secretariats of the co-operatives to sanctions.

When asked whether he had considered resigning in protest over his proposals concerning the introduction of audit procedures and sanction in cases of non-compliance, he said that he opted to stay and struggle.

Maliotis said that serious criminal cases such as those in Ayia Napa, Stroumpi, Ayia Phyla should be directly referred to the police.

He added that the Central Co-operative Bank did not have a clearly defined role to carry out audits at the cooperatives and report to the supervisor.

Cooperation with the supervisor was not a two-way street and as a result it was the board that was informing the supervisor and not vice-versa he said.