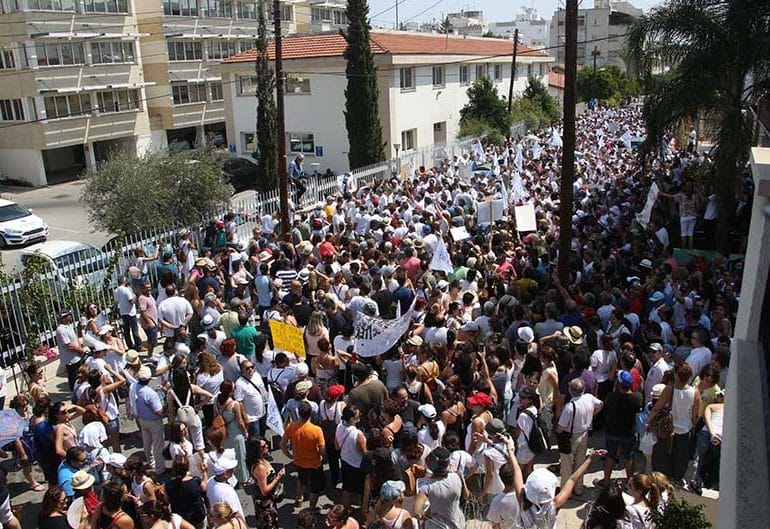 Teachers protesting against changes in August

State doctors’ union, Pasyki, joined a long list of other unions and some political parties on Monday to come out in support of the rejection by teaching unions of the government’s latest proposals to solve the ongoing teaching dispute.

In a statement, Pasyki likened the children’s right to education to the people’s right to health.

“Given that education as well as health are basic social rights that have suffered a severe blow through cuts that led to their degradation, we stand next to those who claim better schools for our children but also defend the right of unionism, the right to dialogue and collective bargaining,” they said.

They were supported by trade union, Equality, which represent civil servants working under contract.  They called on their members to be present at the teacher union protest on Tuesday to support the struggle of the education unions which are against the “illegal, unilateral and destructive actions and decisions by the ministry of education”.

Equality said the government, under the guise of rationalising teaching hours, had altered the terms of teachers’ employment and abolished their union rights which are protected by a number of laws.

The youth branch of Edek said it also supported the teachers.

“It is with great joy that we see employees reacting and claiming a better tomorrow for the education of our country,” the youth branch commented. “An education that has been faltering for years and needs major changes immediately. Changes that need to be made in the right way through the appropriate democratic processes.”

In their announcement, the party said the attitude of the education minister and the government and the way they were handling such an important subject could only create feelings of anger and indignation.

“You have closed the banks,” they accused the state. “Close the schools and you will see what history will say about you.”

According to the teachers’ union, many organisations have lent their support to their actions. Poed leader Filios Fylactou said at a press conference in the morning that several political parties including Akel, unions such as Sek, Peo, students, University of Technology staff and others have all issued announcements supporting the teachers and Tuesday’s demonstration, mentioning democratic dialogue, the quality of public education and dignity in the work of educators.

The march by the public school teachers and their supporters from the Pasydy building to the presidential palace is scheduled to start at 6pm on Tuesday.

From giants to dragons, and all sorts of stories in-between