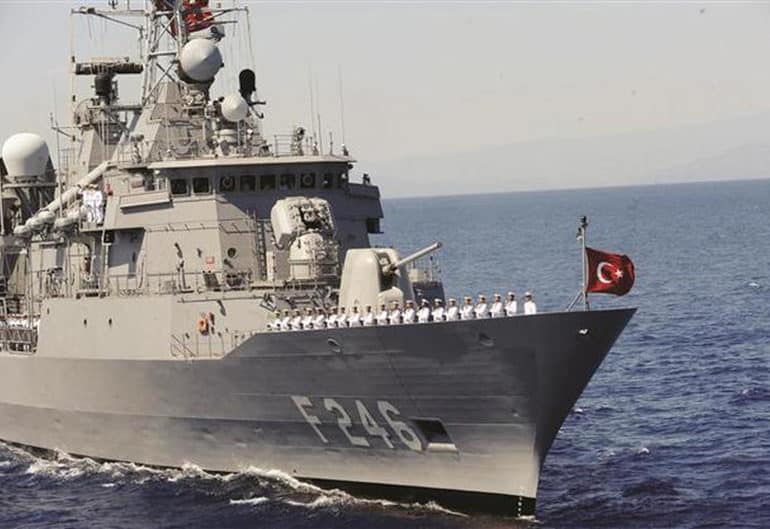 Turkey is planning to establish a sovereign naval base in the north of the island, it was reported on Tuesday.

According to Turkish daily Yeni Safak, Turkey’s navy has submitted a proposal to the ‘foreign ministry’ in the north for the establishment of the base.

Such a base in the north would ensure guaranteeing the ‘sovereign rights’ of the breakaway regime, the daily said, but also the rights and interests of Turkey in the eastern Mediterranean.

A naval base would also reinforce the position of the ‘Turkish Republic of Northern Cyprus’ and Turkey at the settlement negotiations and it could take measures to prevent actions concerning offshore energy areas.

Turkey and the Turkish Cypriot side oppose Cyprus pursuing its energy plans in the island’s exclusive economic zone and have laid claim to a number of drilling blocks.

A proposal for the establishment of a naval base in the north by Turkey was first put on the table in 2009 after the creation of the Andreas Papandreou airbase in Paphos in 1998 and the signing in 2000 between Cyprus and Greece of a joint defence doctrine, the Turkish daily said.

If there is a decision to implement this measure, Yeni Safak said, Turkey would establish a sovereign naval base in the north like Britain has establishment two bases in the south of the island in 1960.

A Turkish naval base in the north would also offset the influence of Greece and Cyprus in the region, the daily said, as the two counties are forging cooperation and partnerships “to dominate over the Mediterranean energy fields.”

The eastern Mediterranean has become one of the most critical regions in the world in terms of energy and military security, the daily said, and given the strategic position of Cyprus, Turkey is taking its measures in view of the developments expected in the coming years in the region.

It said that western powers, especially the United States and Britain, had increased their military presence in the eastern Mediterranean due to the war in Syria while Russia, France, Italy, Germany, Belgium, Spain, Canada, Portugal, Greece, Denmark have anchored their war ships in the region too.

It added that Turkey does not have an air base in the north either and that efforts were underway to meet the Turkish army’s needs using the civilian airport at Lefkoniko, which is currently closed.

According to Yeni Safak, Lefkoniko airport was used in the past by Turkish air force on their way to Cyprus, but it is still closed due to obstacles. One of the problems that must be addressed if the airfield is to be used as an air base the daily said, is the high-voltage power lines installed in the area.

The company you keep may be dangerous