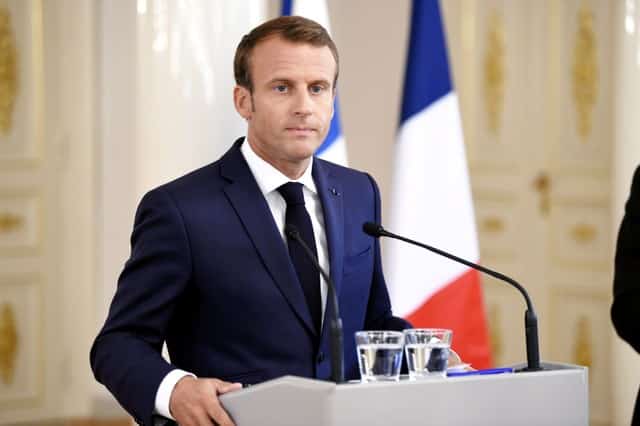 Emmanuel Macron‘s strategy for next year’s European elections is taking shape and the French president sees it in stark terms – an open battle between anti-immigrant nationalists on the one hand and pro-EU ‘progressives’ on the other.

During a tour of Nordic countries this week, he was quick to take up the gauntlet thrown down by Italy’s far-right Deputy Prime Minister Matteo Salvini and Hungarian Prime Minister Viktor Orban, who jointly labelled Macron their number one enemy.

“It is clear that today a strong opposition is building up between nationalists and progressives,” Macron said when asked about the alliance struck between the two anti-immigrant leaders in Milan.

“If they want to see me as their main opponent, they are right to do so,” he said.

Europe has seen a surge in support for far-right, anti-immigrant parties in recent national and regional elections, following a crisis that saw millions of people fleeing war and poverty in the Middle East and Africa end up in Europe.

Macron, a Europhile who during his French campaign said German Chancellor Angela Merkel had “saved Europe’s dignity” by taking in one million refugees, has been cast by EU opponents as a soft touch on immigration, despite his hardline reputation on the issue at home.

In Macron‘s view, that split will be the determining one when voters in 27 EU member states elect new members to the European Parliament next May, an election nationalists see as a prime opportunity to expand their influence and stymie ever-closer EU integration.

Having built his own movement to win the French presidency, confounding traditional parties of the left and the right, Macron is hoping to repeat the feat at the European level, even if doing so is a more risky and unpredictable task.

“It’s about having the National Front as the sole opponent, a sort of re-run of the second round (of the French presidential election) and attracting France’s centre-right movements towards his party,” he said.

By framing the election in the terms he has, Macron hopes to draw to his camp other parties in EU member states, whether traditionally of the left or the right, who broadly share his centrist, liberal, pro-integration vision.

Yet in doing so, he risks unsettling the traditional pillars of European politics, the centre-right European People’s Party, a bloc dominated by Angela Merkel’s CDU/CSU, and the Socialists and Democrats, the bloc of the centre-left.

And while Macron may have set out his broad strategy, details are lacking. It is not clear which parties from at least six other EU states he hopes to form a bloc with, and he has not designated a leader for his European ambitions.

Merkel on the other hand is keeping faith with the EPP, even if Orban and his Fidesz party remain members. She has reportedly backed Manfred Weber, the EPP’s leader in the European Parliament, to be her candidate for the European Commission should the EPP win the elections.

The battle Macron wants to fight in Europe he will also fight at home. His former presidential opponent, far-right leader Marine Le Pen, wants to turn the EU election into what she calls a choice between “federalism and mass immigration and the Europe of free nations and identities”.

“The meeting between Orban and Salvini is seminal,” she said on Twitter. She is hoping to draw Orban away from the EPP into her orbit, building a far-right bloc with the likes of Salvini’s League and her current allies, Geert Wilders of the Netherlands and Germany’s Alternative fur Deutschland.

Aside from the EPP and S&D, which hold a majority of the European Parliament’s seats, there are currently six other groups, including ALDE, which traditionally represents liberal parties, many of which Macron will aim to attract.

Some on the left, such as Swedish Foreign Minister Margot Wallstrom, a Social Democrat, seem tempted to join forces against the nationalists, apparently taking sides with Macron against Orban and Salvini in a tweet:

“I have one thing to say to them: bring it on,” she wrote.

For Macron, building a loose, pan-European campaign of like-minded progressives is likely to be easier than pre-committing to traditional party alliances, his aides say.

That will give him more flexibility come election night, when his followers in Strasbourg will be able to gauge each national contingent and decide who best to group with.

Depending on the size of that new bloc, Macron could have a strong voice in determining the next European Commission president, a job Merkel covets for Germany. That is, of course, if everything goes according to Macron‘s plan.

VAR set for Champions League introduction from next season