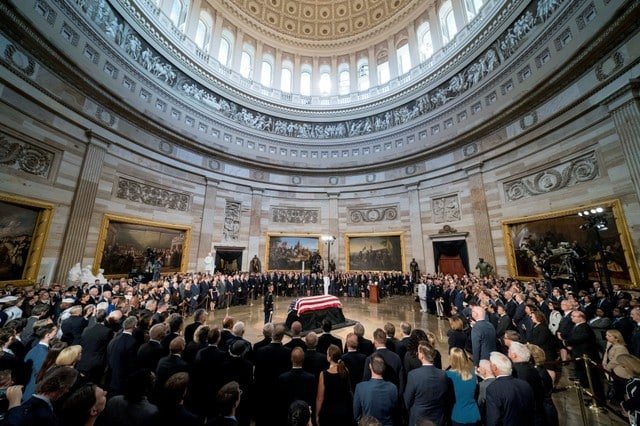 The casket of US Senator John McCain, lies in state at the US Capitol in Washington

A bitterly divided US Congress came together on Friday to commemorate the late Senator John McCain, remembering him as a tenacious fighter for his ideals who never lost his sense of humour or his ability to inspire others.

Leaders from both parties gathered in the US Capitol Rotunda on Friday to honour McCain on the third of five days of memorial celebrations in Arizona and Washington for the Vietnam War hero and two-time Republican presidential candidate.

President Donald Trump was missing from the ceremony, a result of the animosity between the two men that lingered even after the Arizona senator’s death on Saturday from brain cancer.

Trump will also miss Saturday’s service at the Washington National Cathedral, where former President Barack Obama, the Democrat who defeated McCain in 2008, and Republican President George W. Bush, who beat McCain in the 2000 Republican presidential primary, will pay tribute toMcCain.

Senate Republican leader Mitch McConnell, who often fought with McCain over issues such as campaign finance reform and Obama’s healthcare overhaul, praised him as a “generational leader” in the Senate.

“He would fight tooth and nail for his vision of the common good. Depending on the issue, you knew John would either be your staunchest ally or your most stubborn opponent,” McConnell said.

“At any moment, he might be preparing an eloquent reflection on human liberty or a devastating joke, served up with his signature cackle and that John McCain glint in his eye,” he said.

After the ceremony, the public will pass through the Rotunda for six hours to pay their respects toMcCain by filing past his coffin, which was brought into the Rotunda and placed atop a pine board catafalque originally constructed in 1865 for President Abraham Lincoln’s casket.

Trump will travel to one of his private golf clubs on Friday for a campaign fundraiser.

Sitting American presidents traditionally “serve as a source of solace and comfort” for the country at times of loss and tragedy, Princeton University historian Julian Zelizer said.

But the Trump-McCain relationship left little room for that.

In 2015, not long after Trump kicked off his presidential campaign, McCain condemned his hard-line rhetoric on illegal immigration, accusing Trump of “firing up the crazies.”

Trump hit back, saying of McCain‘s 5-1/2 years as a prisoner of war in Vietnam: “He was a war hero because he was captured. I like people who weren’t captured.” Trump received five deferments that got him out of military service.

More recently, McCain accused Trump of kowtowing to Russian President Vladimir Putin at a July summit in Helsinki. It was, McCain said, “one of the most disgraceful performances by an American president in memory.”

Trump in turn delayed issuing any statement after McCain‘s death. At one point, the US flag atop the White House that had been at half-staff was raised back up, then lowered again after Trump drew fire from Congress and veterans.

“The president’s actions in the first day of (McCain‘s) death were so petty,” Zelizer said.

More broadly, Zelizer noted that many Republicans, including some in Arizona, had grown frustrated with McCain‘s moderate stances on some issues, reflecting the changing nature of the Republican Party that Trump has seized upon.

Despite these tensions, most leaders from both parties in coming days will show they can rise above the political fray to recognize the passing of a respected colleague.

McCain was involved in planning the events around his funeral. He made it clear to family and friends that he wanted Democratic former Vice President Joe Biden, Bush and Obama to speak, but that Trump was not welcome.

The pallbearers at Saturday’s cathedral service will include Biden and liberal actor and activist Warren Beatty, alongside former Senator Phil Gramm and ex-Defense Secretary William Cohen, both Republicans.

I’m ‘one of the greatest’ managers – Mourinho