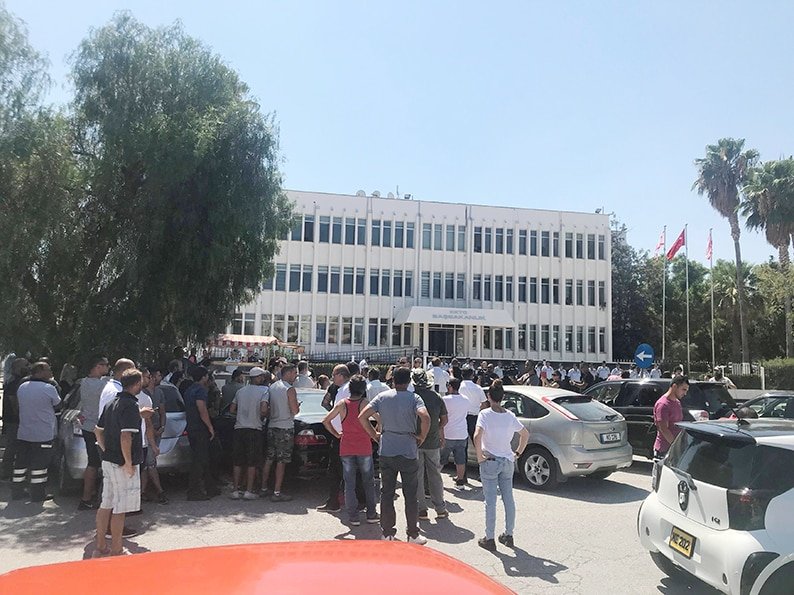 Friday saw the first of a series of protests expected to take place in the north due to the economic crisis as Turkish Cypriots immobilised their vehicles outside ‘government’ offices, expressing their frustration over the rise in fuel prices.

The demonstration was organised by drivers of taxis, buses, and private cars protesting against the effects the drop in the Turkish lira was having on their livelihoods.

The call to protest went out through Facebook and was supported by the association of Turkish Cypriot drivers. It took place in front of the Turkish Cypriot’s ‘prime minister’s’ office, with reports saying demonstrators threw cucumbers at the building.

Cars parked in front of the office and in the middle of the road caused a jam. The protestors shouted slogans and called for the ‘prime minister’ to “turn off the air conditioner and come outside”.

A similar protest took place in Famagusta, according to Turkish Cypriot media, but drivers were given fines for obstructing traffic.

Turkish Cypriot daily Kibirs reported on Friday that the economic crisis had created chaos and caused unprecedented support for the unions, which say that the measures announced by the ‘government’ are insufficient.

People are furious because of the successive price increases, the paper adds, and as of Friday a series of protests and strikes would begin and continue into the coming week.

The Trade Union Platform will meet with the ‘prime minister’ on September 4 in order to submit its economic and political proposals, and has scheduled a protest march for September 6.

Another protest was announced by the union of livestock producers and breeders for September 5.

Meanwhile, public sector unions in the north have lifted their work-to-rule measure after striking a deal on overtime pay.  The industrial action had caused numerous problems in recent days, especially in the health and commerce sectors.

Unions had applied the measure after the administration cut overtime pay as part of an austerity drive to tackle the effects of the crisis.

Reports said the two sides agreed for overtime to be restored based on pay scales but with a 15 per cent reduction across the board until the end of the year.

It was not immediately known whether their scheduled demonstrations planned for Monday, Wednesday, and Friday, would now go ahead.

Daily Kibris also reported on Friday that freight ships remained anchored off the northern coast while trucks full of food and other items remained at Mersin, Turkey. Perishables ‘trapped’ at Kyrenia ‘customs department’ were also at risk, Kibris said.

Business organisations in the north have warned that if everybody did not make the necessary sacrifices, the north would end up facing a much bigger crisis with even worse consequences. Turgay Deniz, chairman of the Turkish Cypriot chamber of commerce, expressed the hope that everybody would cooperate.

Our View: Turkish Cypriot public sector workers appear to be out of touch with reality

Del Potro eases past Verdasco into US Open fourth round