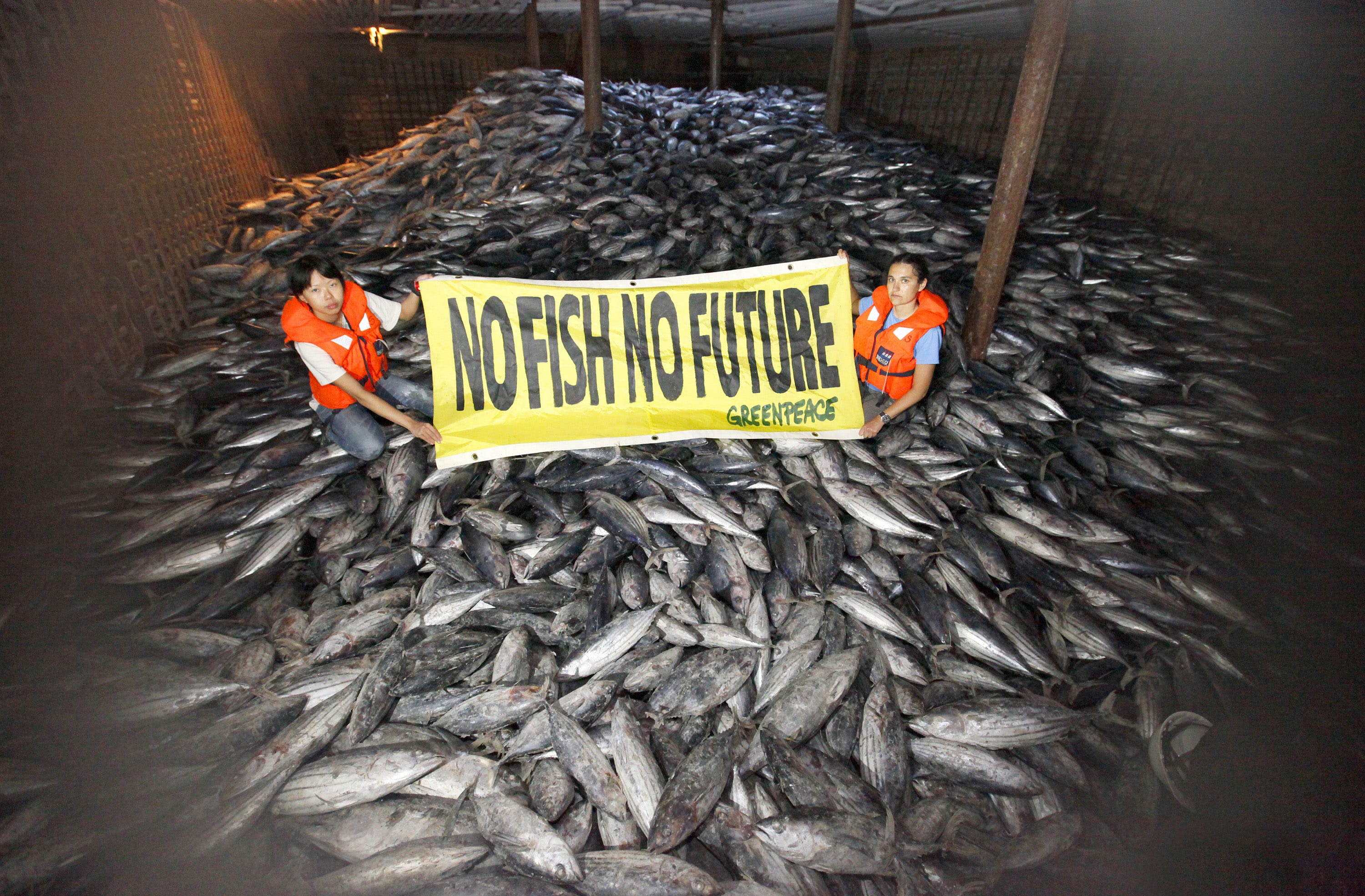 epa03470607 Greenpeace activists hold up a banner in the hold of the Chinese ship 'Heng Xing 1' in an area of international waters near the exclusive economic zone of Indonesia, 14 November 2012. The Cambodian-flagged vessel was caught illegally transhipping frozen tuna from a Philippine fishing vessel and two other Indonesian vessels in the Pacific high seas, where none of the ships have licenses to operate. Under international law, the lack of a valid license means the vessels forbidden to engage in any fishing activities - including fish transfer. The transshipment of fish from one vessel to another is prohibited in international waters under international law as it has been proven to aid illegal, unregulated and unreported fishing activities. Greenpeace activists boarded the 'Heng Xing 1' and found the hold to be full of skip jack tuna and juvenile yellowfin, which are likely to be destined for canned tuna markets in the West. Yellowfin tuna is classified on the International Union for the Conservation of Nature (IUCN) 'Red List' as 'Near Threatened'. Pirate fishing operations are common in international waters where monitoring and surveillance is difficult. Greenpeace is calling for a network of marine reserves to be established in four high seas pockets known as the Pacific Commons, and for these be declared off limits to fishing. EPA/ALEX HOFFORD

Nobody loves the United Nations. It’s a bureaucracy, and its job is to make rules. But where else could you negotiate a treaty on ‘The Conservation and Sustainable Use of Marine Biological Diversity of Areas Beyond National Jurisdiction’ (BBNJ for short)? That is to say, bringing the rule of law to the high seas before all the fish are gone.

“This is a once-in-a-generation opportunity to get ocean governance that puts conservation and sustainable use first,” Liz Karan told National Geographic last year. She’s the senior manager for the high seas program at the Pew Charitable Trusts, one of the many campaigning organisations that finally pushed this to the top of the UN’s agenda.

The ‘high seas’ used to mean all of the oceans beyond a cannon shot from land, but they have shrunk. All the ocean within 200 nautical miles (370 km.) of land is now in some country’s ‘Exclusive Economic Zone’, and protecting fish stocks within the EEZs is the task of more than a hundred sovereign states with ocean coastlines. Some do it well; most don’t.

But out beyond the 200-nautical-mile  EEZs is still the ‘high seas’, where nobody regulates the fishing. That’s half of the planet’s entire surface, containing 90 per cent of the world’s biomass, but back in the 1980s, when UN members were negotiating the Convention on the Law of the Sea (UNCLOS), hardly anybody was fishing that far out.

Well, they are out there now, going where they want and taking as much as they want. Trawlers of up to 14,000 tons (about the displacement of a pre-First World War battleship) quarter the high seas, setting huge gill nets with a large ‘by-catch’ of whales and turtles, dragging long-lines of up to 100 km in length that bristle with hooks, and using bottom-trawling methods that damage the seabed.

Fish populations are generally denser in the EEZs, because nutrients are richer close to the coasts, and even now the high seas account for only about one-tenth of the global fish catch. But it is a critical tenth, because the high seas act as a kind of nursery, especially for the larger species of fish, most of which spend at least part of their life-cycles there.

Allowing large-scale commercial fishing to take over on the high seas is like sawing off the branch we’re sitting on. Happily, a majority of the world’s countries agree that it should be controlled.

Only ten countries, all of them rich (Spain, Japan, Korea, etc.) account to 70 per cent of fishing on the high seas, and even they aren’t really making money out of it. If it weren’t for large government subsidies, there would be hardly any fishing vessels operating that far out: the fuel costs alone would be prohibitive. So there is probably a deal to be done here.

The initiative for a treaty to regulate high-seas fishing came from New Zealand and Mexico, but more than 70 countries have co-sponsored it, and the first of four sessions that will negotiate the new treaty opens at the UN in New York on 4 September.

The high-seas treaty will probably be attached to the existing UNCLOS treaty, and they are hoping to have it ready for signature by mid-2020. That sounds a bit optimistic (‘everything takes longer and costs more’), but there is actually a good chance that the job will get done, and that it will have positive effects.

The treaty’s main achievement, if it succeeds, will be to create and supervise ‘marine protected areas’ (MPAs) on the high seas in which no fishing whatever is permitted. They need to be very large – advocates talk in terms of MPAs adding up to at least one-third of the entire high seas area – in order to allow entire ocean ecosystems to recover, from corals and sponges up to tuna, sharks and turtles.

Policing these MPAs once they are created would be a lot simpler than enforcing the rules closer to shore because the high seas fishing fleets are big ships operating in relatively uncrowded waters. Satellites would quickly spot one fishing in the wrong area, and the fines would build up quickly.

Meanwhile, smaller vessels fishing in the EEZs might find that they were catching more fish. Rashid Sumaila, director of the Fisheries Economics Research Unit at the University of British Columbia, estimates that closing all the high seas to commercial fishing would turn them into a “fish bank” that produced more and more fish, many of which then migrated to the EEZs and boosted the catch there by 18 per cent.

It’s late in the day, and the oceans are already badly damaged. A new treaty cannot stop warming and acidification from making them an increasingly difficult environment for life. It probably won’t even address the plastic plague. But it will provide a large safe haven where fish populations can recover, at least for a while.

The heat is still on