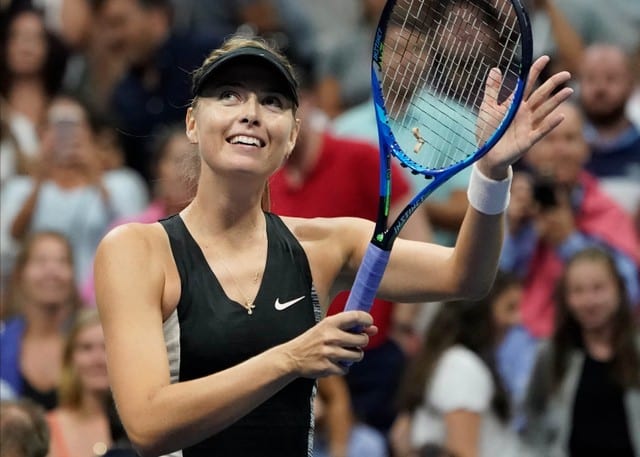 Maria Sharapova continued to enjoy working the U.S. Open night shift with a 6-3 6-2 humbling of 10th seeded Latvian Jelena Ostapenko on Saturday, improving her record to 22-0 under the Arthur Ashe Stadium floodlights.

There is no denying Sharapova’s love for the big stage or the New York crowd’s love for her and the five-time Grand Slam champion admitted that she feeds off the buzz.

“It’s the energy you get, no doubt I feed off this energy,” said Sharapova, the 2006 U.S. Open champion.

“It’s inspiring to play on this court in front of this crowd.”

Even if the match was played at night there was no masking the poor quality of the opening set that featured four breaks of serve.

Ostapenko, who was the runaway leader in double faults at this year’s final Grand Slam, had three alone on her opening serve but was not punished for her sloppiness with Sharapova unable to convert any of five break chances.

Eventually Sharapova would cash in on Ostapenko’s generosity with the Latvian offering up 11 break opportunities and the Russian converting three – more than enough to take the first set.

The nightmare serving continued into the second set with four consecutive breaks of serve before Sharapova finally managed a hold for 3-2.

Ostapenko, however, would not manage to hold her serve at any point in the set and Sharapova broke the 10th seed twice more to clinch the victory.

Women’s Singles schedule
Day 7, Sunday, Sept. 2
No. 3 Sloane Stephens vs. No. 15 Elise Mertens
No. 7 Elina Svitolina vs. No. 19 Anastasija Sevastova
No. 8 Karolina Pliskova vs. No. 18 Ashleigh Barty
No. 17 Serena Williams vs. Kaia Kanepi

Pentagon cancels aid to Pakistan over record on militants