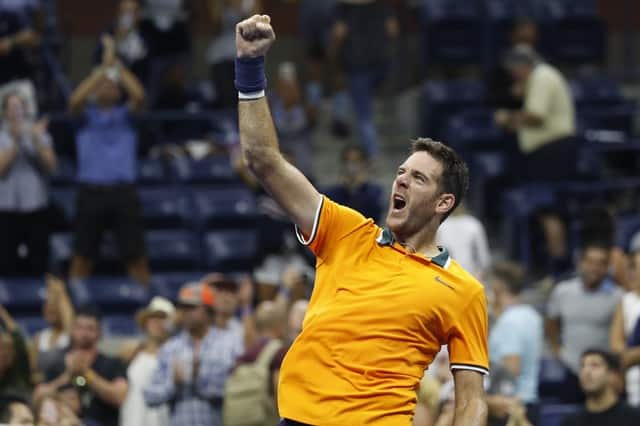 The Argentine sent down nine aces and 33 winners to seal a one-sided victory over the 20th seed in just over two hours, with Coric making 30 unforced errors to undermine his own cause.

The Croatian needed a medical timeout in the second set and was then blown away by Del Potro’s booming forehand in the third, surrendering the set in just 30 minutes.

Del Potro, champion in 2009, got an early break to go 3-1 up in the first before Coric fought back to level at 4-4, converting the only break point he carved out in the match.

The opener looked to be heading for a tiebreak before Del Potro dispatched a backhand volley to earn himself two more break points in the 10th game.

Coric rallied for deuce but double faulted to give Del Potro another break point opportunity and conceded the set with an unforced error.

“I think that moment was the key of the match,” Del Potro said in an on-court interview. “It gave me confidence.”

Both players suffered in the humid conditions under the floodlights at Arthur Ashe Stadium, but Del Potro fed off the energy of the crowd, including a group of his friends who have travelled from his hometown Tandil to cheer him on.

“They are crazy,” he added with a smile. “They have to go back to Argentina and work again after this tournament. I would like to keep them singing.”

Next up for Del Potro is 11th seed Isner, who won his second five-setter of the tournament to see off Canada’s Milos Raonic earlier in the day.

“John is a friend of mine and he deserves to be in the quarters as well,” said Del Potro, who has not dropped a set so far in New York.

“He has a big serve and I will try to return his serves if I can. With this crowd anything is possible and we will see what will happen.”

Day 8, Sunday, Sept. 2: Men’s Singles schedule of play
No. 2 Roger Federer vs. John Millman
No. 6 Novak Djokovic vs. Joao Sousa
No. 7 Marin Cilic vs. No. 10 David Goffin
No. 21 Kei Nishikori vs. Philipp Kohlschreiber

Stephens cruises past Mertens and into U.S. Open quarters