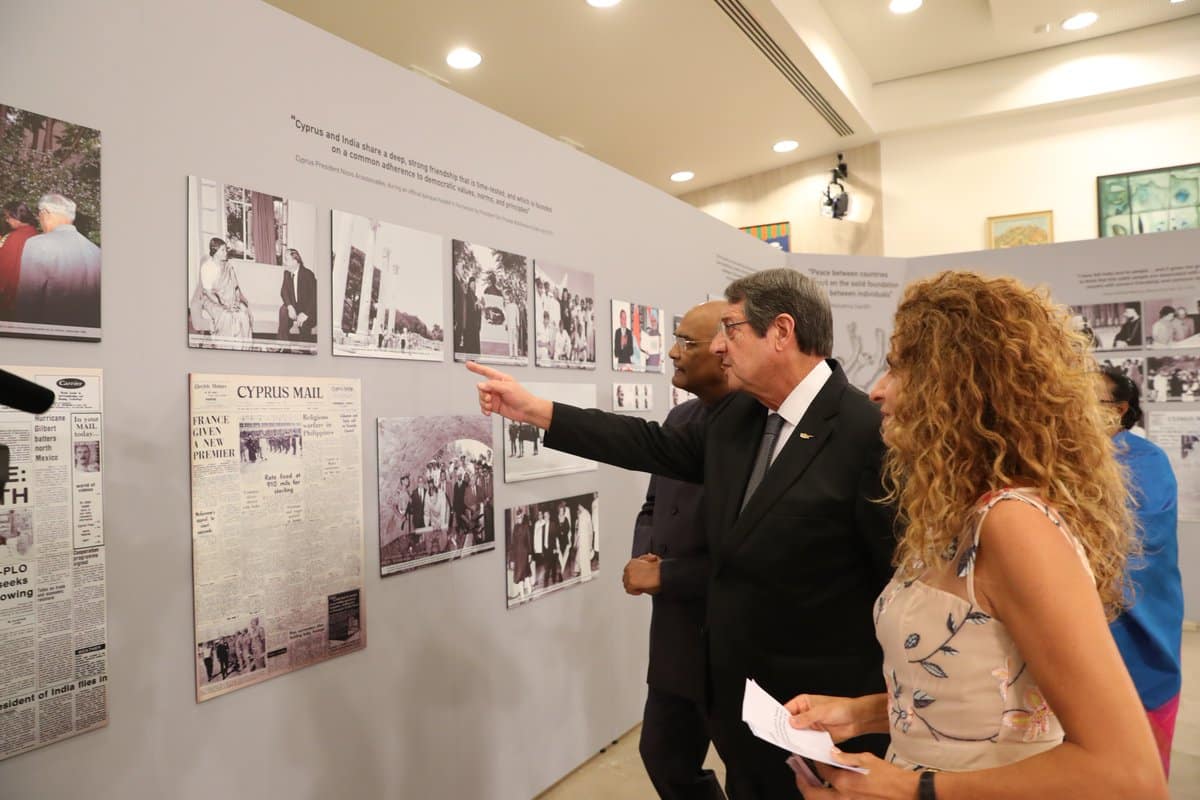 The two presidents look at the exhibits of an exhibition at the presidential palace highlighting the long historical links between the two countries. A copy of an old front page of the Cyprus Mail can be seen to the left. The exhibition was organised by the Press and Information Office

Cyprus and India reaffirmed the strong bonds of friendship between the two countries on Monday, as they strengthened their co-operation in the financial and environmental fields and pledged to finalise outstanding bilateral agreements and implement others.

Addressing an official banquet in the honour of Indian President Ram Nath Kovind at the presidential palace, President Nicos Anstasiades said both countries shared a vision of peace and democracy and had historical bonds of friendship.

“The bonds between our countries stretch back to the establishment of the Republic of Cyprus, following the end of India’s and Cyprus’ struggle against colonialism,” Anastasiades said. “The first president of Cyprus, Archbishop Makarios, and the first prime minister of India, Pandit Nehru were among the protagonists of the Non-Aligned Movement.”

The Indian president, accompanied by his wife Shri Savita Kovind, were officially welcomed to Cyprus by Anastasiades and his wife Andri, during a ceremony at the presidential palace on Monday morning.

The two countries later signed memorandums of understanding in two important fields of cooperation, financial intelligence and the environment, and re-affirmed their determination to cooperate in the international arena to address global and regional problems which require a collective response, such as counter-terrorism, money laundering, non-proliferation of arms and protection of the environment.

Kovind talked about further enhancing the already special ties between the two countries, in particular in the field of financial and economic partnership as well as other fields including IT.

He thanked Cyprus for supporting India becoming a permanent member of the UN Security Council.

Anastasiades expressed gratitude and appreciation to the president and the Indian government for the principled stance and important support they give Cyprus in its efforts to reach a comprehensive settlement to reunite the island.

“Cypriots, as well as Indians, are well aware that peace is the most expensive commodity in our respective regions,” The Cypriot president said. “We are also aware that, irrespective of how evasive the quest for peace and security seems at times, the guiding principle of our actions is to provide a better future for the generations to come.”

Anastasiades assured his counterpart of his determination to further enhance the historically excellent relations of the two countries.

“We have today agreed to set up a ministerial working group to oversee work on the completion of pending bilateral agreements which will ensure the implementation of existing agreements, particularly in the fields of economy, merchant shipping, investment and tourism,” he said.

Following his meeting at the presidential palace, Kovind attended a special session of the House of Representatives in the presence of Anastasiades.

Addressing MPs, the Indian president focused on the joint values ​​and close relations between India and Cyprus.

“Cyprus is not only a friend, but one of our staunchest supporters,” he said.

He spoke of the friendship between Archbishop Makarios and Mahatma Gandhi, noting that in India there is great respect for the name of Makarios the third.

Kovind also referred extensively to the progress made by India in business, tax and technology, and invited Cypriots to invest in the country.

“India has opened for business. It is open to Cyprus. Come and come quickly,” he said.

Before the session House speaker Demetris Syllouris welcomed the Indian president outside parliament after laying flowers at the bust of Mahatma Gandhi, which is located next to the legislature. Syllouris and Kovind had a private meeting.

During his visit, President Kovind will also be unveiling the bust of one of India’s greatest poets, Rabindranath Tagore, a Noble Laureate, at the campus of the University of Cyprus.

President Kovind is the first Indian President to visit Cyprus in nine years. The previous president who paid Cyprus a visit was Pratibha Patil, in 2009.

During the day, Andri Anastasiades and Savita Kovind visted the Hope for Children Foundation in Nicosia where the Indian first lady donated €8,695.

The staff members and the head of the European Funds Unit of the ministry of the interior Constantinos Kyprianou gave the two women a brief tour of the establishment.

The two first ladies then enjoyed a brief musical performance by the children as well as a presentation of the organisation’s programmes and services.

The director-general of the organisation expressed his gratitude to the two first ladies for their visit and for the interest shown in the organisation which aims at the protection of children’s rights.

In the afternoon, the Indian president and his entourage visited Fig Tree Bay in Protaras.

Reports said the president and his daughter took a walk on the beach while a minister who was with him took a dip in the sea.

The visit took place amid draconian measures by the police, which used snipers and a helicopter to monitor the area.

Some 20 sunbeds were also reserved for the Indian guests.

Before the banquet on Monday evening, the two presidents and toured an exhibition of  photographs, stamps, press releases, and other material, on the relations between Cyprus and India, their governments and their people, over the years. Old front pages of the Cyprus Mail referring to stories on India featured prominently in the exhibits.

A gala of an evening