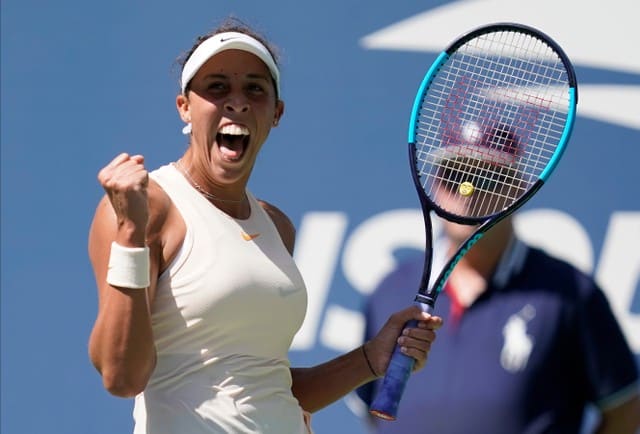 Joy for Madison Keys after beating Dominika Cibulkova of Slovakia

Madison Keys maintained her dominance over Slovakian Dominika Cibulkova with a 6-1 6-3 victory on Monday to reach the U.S. Open quarter-finals.

The 14th-seeded American, looking to go one better than her runner-up finish at Flushing Meadows last year, relied on both her dangerous serve and powerful groundstrokes to deny Cibulkova any chance of an upset win.

Cibulkova, who arrived on the Arthur Ashe Stadium court brimming with confidence after toppling Wimbledon champion Angelique Kerber in the previous round, countered with a similarly aggressive game to little avail.

With the U.S. Open’s heat advisory put back into effect, the pair traded punishing groundstrokes under the blazing sun and it was Cibulkova who was often pinned well behind the baseline and at the mercy of her opponent.

“The biggest thing is just being able to push her back off of the baseline where she likes to hold her ground and just be able to dictate points like that,” Keys told reporters.

Keys started the match by holding in the first game and then doubled her lead after a 14-minute game that featured four game points for Cibulkova, who was baking on the sunny side of the court, and five break points for the American.

Keys has been solid in New York, having dropped a single set through four matches, and turned it up a notch against her 29th-seeded opponent as she lost only 10 points on serve during a 76-minute match in which she was broken once.

Cibulkova, who had not reached this stage of the year’s final Grand Slam since reaching the last eight in 2010, pulled ahead 3-2 in the second set but Keys stormed home from there and clinched the win on her second match point when the Slovak sent a forehand wide.

“I just couldn’t get into my game. I felt like when I had a chance to go for it, I just made mistakes because I was rushing. Sometimes I felt like I was just not going for it enough,” Cibulkova told reporters.

“As always… (in a) match against Keys, (it’s) hard for me to play my game and to get into the rhythm and just do what I do best on court.”

With the win, Keys improved to 5-0 lifetime against Cibulkova and becomes only the second woman, after Kerber, to reach the quarter-finals or better at three of the four Grand Slams this year. Next up for Keys, who was routed by Sloane Stephens in last year’s final, is the winner of the evening clash between five-times Grand Slam champion Maria Sharapova and Spanish 30th seed Carla Suarez Navarro.

Day 9, Tuesday, Sept. 4
Women’s Singles schedule
No. 3 Sloane Stephens vs. No. 19 Anastasija Sevastova
No. 8 Karolina Pliskova vs. No. 17 Serena Williams