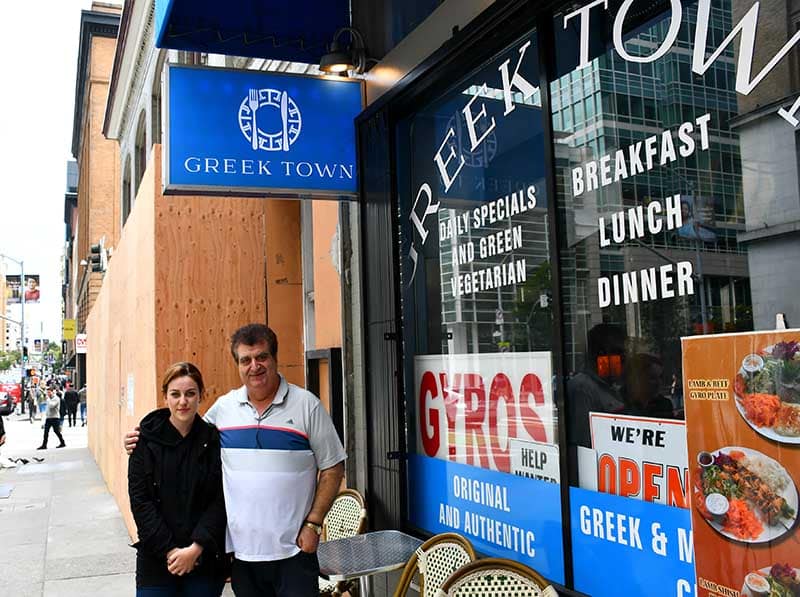 The phrase ‘It’s a small world’ is often bandied around and on a recent trip to California I could see why. I travelled from Cyprus to San Francisco, California to visit an American friend, it was my first trip to the US so I was very curious to see how different the life and the people were. Staying in California for three and a half weeks, I explored as many areas as I could squeeze in, having a great time travelling to and from nearby cities including Los Angeles, San Jose, Palo Alto, Monterey and Oakland.

As I’d expected, the trip was an amazing experience; I met lots of interesting people from all walks of life and from all different cultural backgrounds. On the last day my friend suggested we have lunch in a Greek restaurant to see how ‘Greek’ I would find the food on offer. And it wasn’t until we headed to a little eatery in the Downtown Financial District of San Francisco, called Greek Town, that I had met any Greek speakers.

In no time at all we were outside the very Greek looking little taverna. A big blue sign with big white letters assured us we were about to have a very Greek experience. We walked in and were immediately approached by a very smiley, friendly, obviously Greek man, owner Christos Iacovou. He proceeded to make it his mission to ensure we had a wonderful time and delicious food.

He began to explain the menu which was up on the wall to us, when it became clear that he was from Cyprus. And when he realised I too was from the island he displayed the traditional Cypriot hospitality anyone who lives here is familiar with. “The drinks are on me!” he said, “I will give you some sweets to take to your friends”.

Christos was born in Cyprus and had worked there all his life when he made the move to San Francisco in January 2017 at the age of 58. His decision was largely based on the fact that both his son and brother had already been living and working in the US for a few years and had encouraged him to join them. The idea of opening his own restaurant, in a place where Greek restaurants were few and far between, held the most appeal. In this way he was able to interact with the customers rather than just sending food out from the kitchen.

In Cyprus Christos had worked in many hotels as a chef, including the Londa Beach Hotel, the Elias Beach Hotel and the Atlantica Bay Hotel in Limassol and the Athena Royal Beach in Paphos.

The food at Greek Town is typical Greek fare, using ingredients sourced mainly from a Greek supplier in California so it can be as true to its origins as possible. Today Greek Town welcomes visitors from all over San Francisco, both locals and tourists alike, and especially those with Greek heritage.

But starting over when most people are thinking about retirement cannot have been easy? Christos said he overcame the differences in the culture and way of living in California, through a combination of patience and determination. The US, he said, offers a myriad of possibilities for those willing to work hard to make their dreams come true. Even for a Cypriot used to living in a small and sheltered place like Cyprus, the opportunity is there.

Although learning to drive on the other side of the road proved something of a challenge. He also found a significant difference in the cost of living, especially the rent as an average apartment can set you back a hefty €3,000 per month.

Christos is a true master of food, who was awarded five prestigious Gold Medal Executive awards in Greek and Mediterranean Cuisine. But as I bid farewell to the States, I was comforted by meeting the type of Cypriot we are all used to. The one who will eagerly say hello, shake hands and have a long conversation. The type who will insist on buying you a Cypriot coffee.

Meeting him on my last day in San Francisco, just before my flight back home to Cyprus was a great way to end my trip. It never ceases to amaze me how it is possible to come across a Cypriot in the furthest away of places even though the Cypriot population is so small. His food was delicious too and I had one of the best mousakas ever in San Francisco! If you ever find yourself in the Downtown Financial District of San Francisco, call in at Greek Town.

Morata: ‘Last season everything was a disaster’

This season’s sexiest trend is all about showing some décolletage

Sailing across the sand: land yachting in Limassol

A minute with Tatev Petrosyan Life and Business Coach