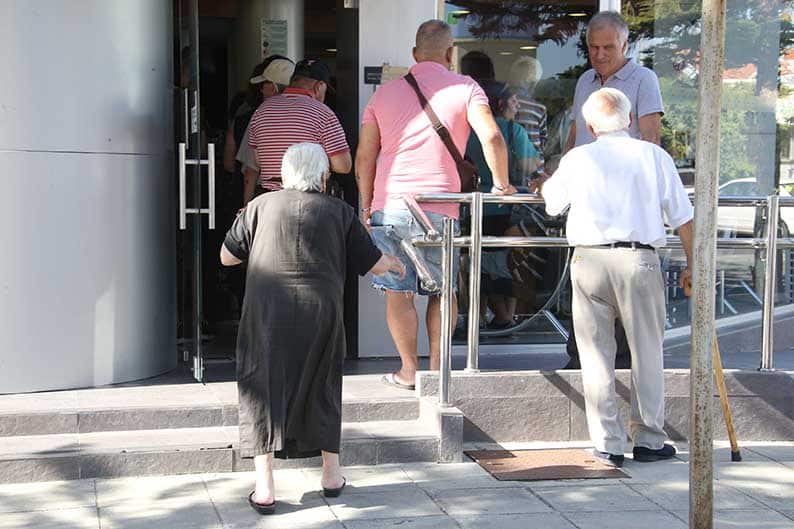 Queues outside the Co-op in July

The acting chairman of the former Cyprus Co-operative Bank Giorgos Hadjinikolas said on Wednesday that the bank went down because its initial restructuring plan did not allow it to operate as a single entity.

Hadjinikolas, who was testifying at the committee probing the causes that led to the breakdown of the state-owned bank into which taxpayers injected €1.7bn, said that the bank should have reduced its staff levels by up to 400 workers with a radical restructuring plan. This could have helped set up a minor, single bank from the very beginning, the Cyprus News Agency reported.

He also described the bank’s restructuring plan from 2013 which provided for a structure of 18 co-operative banks as a waste of time, especially as it was opposed by the troika of the European Commission, the European Central Bank (ECB) and the International Monetary Fund (IMF) which supervised Cyprus’ bailout.

He added that there were rumours that people, whom he did not name, were making pressure in that direction.

The Cyprus Co-operative Bank is the product of a 2017 merger of the Central Co-operative Bank and the 18 independent co-operatives it administered and served as lender of last resort. In March, the Co-op announced its intention to seek a buyer for part of its operations and assets or the entire business, when its failure to reduce its €7bn non-performing loans stock wiped out its equity. Rumours about the expected fate of the bank hurt depositor confidence prompting the largest outflow in deposits since the 2013 banking crisis.

Hadjinikolas, who became acting chairman in October last year succeeding Christakis Taoushanis, said that other factors were related to its sensitive loan portfolio, a large portion of which concerned mortgages and the ECB’s Single Supervisory Mechanism’s (SSM) assumptions concerning the value of collateral of non-performing loans applied at the last onsite inspection early this year.

In addition, was the fact that the bank was constantly “in the eye of the storm”. No matter what it did, it faced backlash from political parties, other groups and the auditor-general and others, he said, and this also played a role in its failure.

Since 2013, the Co-op took 1,700 decisions some of which were correct and some wrong, he said, adding that the board did its best to keep the corporation afloat.

Given the nature of the bank’s portfolio which led to an increase of provisions for loan impairments, the lender would have likely required additional capital on top of the initial €1.5bn made available in 2014, he said.

Primary residences, which Cypriot banks practically exempted from foreclosures, were the Co-op’s Achilles heel. The SSM considered them having zero value which in turn led to an increase in capital requirements by €400m and gave the bank no time to gradually increase its provisions for loan impairments.

The risk management unit was preparing for a gradual reduction of the value of mortgaged primary  residences to zero over a three-year period, he said.

Hadjinikolas questioned whether it was justified for Taoushanis to resign over a single disagreement which concerned the deal with Spain’s non-performing loans specialist Altamira. He defended the bank’s decision to enter an agreement with the Spanish company, a deal that attracted criticism related to its failure to explore other options also from the auditor-general, Odysseas Michaelides.

He compared Altamira to Argentinian footballer Lionel Messi wanting to join the Co-op’s team which would justify a higher cost, which he said gradually improved and added that his bank received positive opinions from its advisors Citi and Blakrock about the Spanish company and did not have to always resort to tenders.

The initial deal signed with Altamira in June 2016 was non-binding and if Altamira’s performance met the best one out of four possible scenarios, the Co-op would have additional €563m in cash flows, compared to the current €300m, according to Hadjinikolas.

Altamira’s assistance was necessary to convince the supervisor that the bank was making progress in reducing its non-performing loans, he continued.

Hadjinikolas said that if the Co-op hadn’t reached an agreement with Hellenic Bank, this would have resulted in losses for depositors and added that it was the most favourable option under the circumstances.

The accounting firm Grant Thorton, the Co-op’s external consultant, opined that alternative scenarios to the agreement with Hellenic, which at least safeguarded financial stability, would be disastrous, he said.

He also said that the bank supervisors, i.e. the SSM and the Central Bank of Cyprus, only instructed the Co-op not to seek a listing on the Cyprus Stock Exchange (SSM), a provision of the restructuring plan, and to look instead for strategic investors in May and July last year.

“It was the supervisor’s fault that they allowed us to enter this procedure and then tell us that they didn’t like it,” he was quoted as saying.

Hadjinikolas said that some of the board members, who were concerned about the bank’s course and the progress of the executive management, sought a meeting with Marios Clerides who had served as the bank’s chief executive officer (CEO) before resigning.

After Nicholas Hadjiyiannnis succeeded Clerides, the new CEO’s reports showed that progress was made during his tenure, including an increase in lending, the acting chairman said.

Clerides told the committee more than a month ago that he felt that Hadjiyiannis and the board were undermining him and interfered in executive affairs which prompted his resignation in mid-2015.

Hadjinikolas admitted that Clerides’ performance may be have been unfairly judged as in the one-and-a-half years of his tenure, things were under construction.

Tourists in boat crash off Peyia

Mauritius case could have ‘significant impact’ on Cyprus