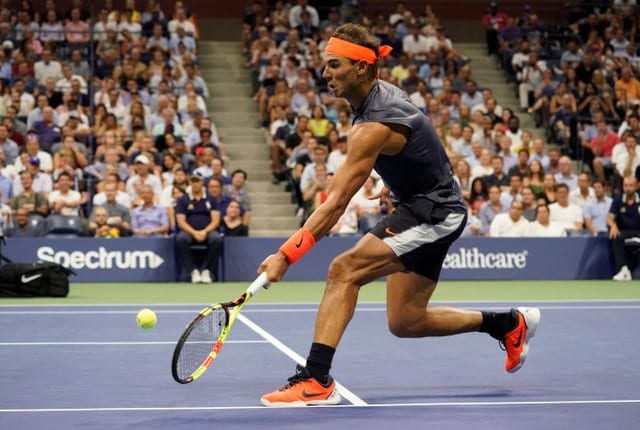 Defending US Open champion had to dig deep to overcome the battling Austrian Dominic Thiem.

Defending champion Rafa Nadal failed to win a single game in the opening set of his U.S. Open quarter-final against Dominic Thiem on Tuesday but fought back to beat the Austrian 0-6 6-4 7-5 6-7(4) 7-6(5) in a match that ended past 2 a.m. in New York.

Nadal won just 40 percent of his first serves in the first set as he struggled with the high humidity on the Arthur Ashe Stadium court, as Thiem became the first player to ‘bagel’ the Spaniard at Flushing Meadows since Andy Roddick 14 years ago.

“It’s been a great battle,” an exhausted Nadal said. “The conditions were tough, very humid for me.”

Thiem, who lost to Nadal in the French Open final but who has beaten the Spaniard three times in 10 previous meetings, struck 74 winners, including 24 with his stylish single-handed backhand, to keep the champion under constant pressure.

“I’m very sorry for Dominic,” Nadal added. “He’s a close friend on tour, a great guy and I wish him the very best … He is young and has plenty of time to win tournaments.”

After Nadal roared back to take a 2-1 lead, the fourth set went to a tiebreak. Thiem raced to a 3-0 lead before Nadal fought back, but the Austrian held his nerve to level the match.

There were no breaks of serve in the deciding set and a second tiebreak ensued. The two were neck-in-neck at 5-5 when Nadal carved out a match point with his forehand.

Thiem’s wayward overhead smash handed the match to Nadal, who stood midcourt with his head thrown back and arms raised in the air in celebration.

“Thank you very much everybody for staying here tonight,” Nadal said after the four hour, 49 minute marathon.

“It’s been an amazing feeling. I’m playing a lot of hours this year at this beautiful stadium.”

The three hour, 31 minute quarter-final was played in suffocating humidity so extreme that officials called a halt to junior matches on the outside courts for more than two hours.

“I weigh 238 pounds, so I have always said it’s pretty difficult to play in hot conditions,” said Isner, who had 11 shirt changes during match. “I weigh a lot and I sweat a lot.

“It takes its toll on bigger guys, in my opinion.

“I don’t know what I weighed before the match. I did not weigh myself, but I can tell you I lost a lot of weight out there.”

Anyone looking for serve and volley came to the wrong place as the pair traded bombs from the baseline with Isner, bidding to become the first American since Andy Roddick in 2006 to reach U.S. Open semi-finals, belting 26 aces and Del Potro 14.

Break chances were few and far between, Isner managed just three and was unable to convert any, while Del Potro had 11, cashing in on three, including one to close out the match.

It was enough to see Del Potro, the 2009 U.S. Open champion, through to the last four at Flushing Meadows for a third time where he will face either top seed Rafa Nadal or Austrian ninth seed Dominic Thiem, who were playing later on Tuesday.

“I think I played very solid this game,” said Del Potro. “In particular I made good returns every service game.

“I don’t know if I’m playing my best tennis ever but I’m feeling good. I reach another semi-finals in this grand slam, which means something big to me.”

The Argentine had the sole break chance in the opening set but the third seed could not convert, while Isner had a mini-break at 3-3 in the tiebreak and turned that into a 1-0 lead.

It was the first set surrendered by Del Potro at the tournament this year and a positive omen for 11th seed Isner, who was 24-2 at Flushing Meadows when winning the first set.

But Del Potro would not drop another set as the Argentine appeared better equipped to deal with the conditions even though he joked he did not want to come back on court following a 10-minute break between the third and fourth sets.

“I had a shower, lay on the table and I didn’t want to come back again,” laughed Del Potro.

“It was too hot for tennis.”

Erdogan has limited options to save Turkey from financial crisis