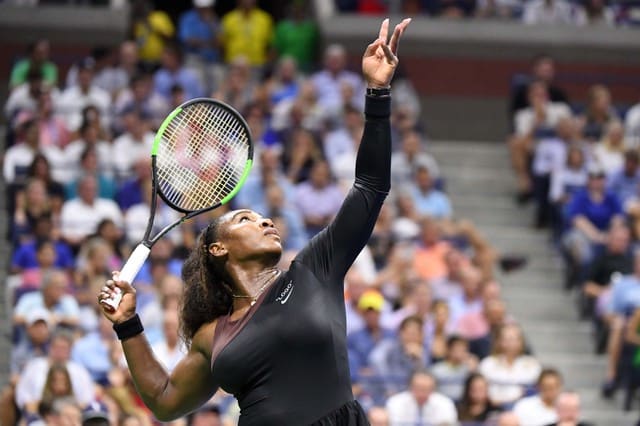 Serena William powered her way to within two victories of a seventh U.S. Open title on Tuesday and while she refused to look ahead there are many willing to do it for her, and what they see is a suddenly open path to a 24th Grand Slam.

“I’d been a couple steps away at the last Grand Slam, so I’m definitely not ahead of myself,” said Williams, the memory of a 6-3 6-3 loss to Angelique Kerber in the Wimbledon final still fresh.

“I still know that no matter whether I’m in the semi-finals or the finals, I have a really long way to go to win that.

“Again, that proved to be true at Wimbledon.”

Williams has done her part, making her way to the last four with her usual efficiency while throwing in an occasional wobble just to keep things interesting but not scary.

But Williams has also received help along the way with others bulldozing the route to Saturday’s final clear of some major roadblocks.

When the 36-year-old American first looked at the draw she would have instantly picked out world number one Simona Halep as a potential troublespot, but even before Williams had hit her first ball the Romanian was gone, a victim of a first round upset, eliminating a tricky fourth round encounter with the French Open champion.

Spain’s double Grand Slam winner Garbine Murgurza was next to go, making a second round exit, and then earlier on Tuesday Williams side-stepped a semi-final showdown with third seed Sloane Stephens when the defending champion was sent packing by Anastasija Sevastova.

The 18th seeded Latvian is now the only hurdle standing between Williams and a place in Saturday’s final where the other side of the draw has also been cleared of potential trouble with 14th seeded American Madison Keys the highest ranked threat remaining.

Williams’s 6-4 6-3 quarter-final win over Czech eighth seed Karolina Pliskova on Tuesday was her first over a top 10 ranked opponent since returning to the WTA Tour in March following the birth of her first child.

“I don’t think I have another 10 years of having opportunities to be able to play and win championships.

“Every match really means a lot to me. I kind of go out there and I just do the best that I can.”