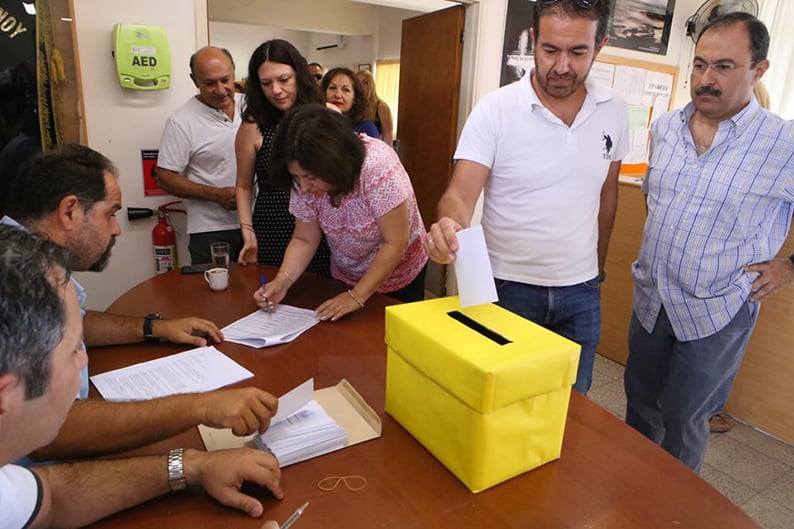 Members of the Oelmek union taking part in Wednesday's vote

Teachers on Wednesday overwhelmingly voted to authorise their unions to take any measures they see fit, including strike action, in their ongoing dispute with the government over their employment terms.

Members of the three unions of the primary and secondary education sectors, Poed, Oelmek, and Oltek, authorised their representatives by majorities exceeding 90 per cent to act as they deemed necessary ahead of a meeting on Thursday that could decide on industrial action as the government reiterated its call for dialogue.

The latest decisions by the government presented on Tuesday as a compromise appeared to have no effect on the teachers.

“It was higher than we expected,” he told state television.

Charalambous said the three unions will convene on Thursday at 12pm without ruling out a strike decision.

“It is a very possible scenario,” he added.

The union said however, that teachers will distribute books and see to it that pupils are welcomed and shown to their classes on Friday, two things that the union was not going to undertake as part of its work-to-rule measure.

Earlier, members of Oelmek and Oltek also authorised their representatives to act as they saw fit.

The head of Oelmek, Yiannos Socratous, said there was still some time before the official opening of schools “and this period of two-three days will need to be utilised,  so we’re once again sending the message to the government and the education minister, that every hope of finding a solution will have to be exhausted before we resort to strike measures, which are, I repeat, not an end in themselves.”

Meanwhile, parents’ groups held a lengthy meeting in Chirokitia on Tuesday night to discuss the recent developments in the education crisis, including union measures and the September 4 cabinet decisions.

While the chairman of secondary school parents’ group, Kyriakos Nikiforou, said they were against starting classes on September 7 amid a crisis, the group representing parents of kindergarten pupils reiterated their support for the teachers’ cause, according to their chairman Costas Yiangou.

The primary school parents’ group asked both the education ministry and unions to rethink their stances and to refrain from taking measures that might affect the proper functioning of schools, according to chairman Sotiris Christofi.

“We have unanimously decided that our aim is to start the new school year as smoothly as possible,” Christofi said. “We want to keep a neutral stance by calling on both the ministry and the education organisations to rethink.”

But questions were also raised about the way the vote of union members have been held. Sigmalive reported on Wednesday that electoral analyst Dr Nasios Orinos the voting methods as “unacceptable and highly unscientific.”

“In no country in the world and in no elections or referendums, are results announced before the polls are closed,” Orinos said.

The house education committee met Wednesday morning in light of the new cabinet decisions the previous day, though both the education minister and education organisation heads were absent from the meeting.

Education Minister, Costas Hambiaouris, informed unions on Tuesday that the latest cabinet compromise substantially differed from the original July 4 decisions, and “took into account the sensitivities and demands of the education unions”.

The minister had sent an email to teachers’ personal accounts on Tuesday evening, a move criticised as an attempt to intervene in the vote. Some educators also contemplated reporting the minister for violating personal data rules.

Unions have not yet submitted formal reactions to Tuesday’s proposals but stated that these will be discussed during their upcoming meetings on Thursday and official responses would be given.

Informally, Charalambous said of the September 4 cabinet decisions that “nothing has changed. Once again, unilateral decisions, not proposals aiming for dialogue, were made.”

“Nevertheless,” he added, “there are one or two points that still need clarification.”

Akel general secretary reiterated Charalambous’ claims: “The government is trying to undermine our intelligence. They say that these decisions were the result of dialogue, but dialogue would require the presence of both parties and the exchange of opinions so that a middle ground could be found.”

The new cabinet decisions said that although form teachers will still see their ‘free’ periods, according to years of service, cut from two to one, as announced back in July, they will be compensated via a ‘credit system’ or through other incentives or benefits granted over the long term.

Further, the proposed reduction in free periods will apply solely to existing teachers; people hired in the future are to be exempted and so will be entitled to all free periods.

Moreover, the government commits to consider the demand for establishing a dedicated provident fund for new hires.

Also, union reps from each trade union will be allowed time to engage in union-related work inside working hours, but this will be regulated.

The measures decided by the cabinet are designed as an interim deal, in force until the end of the year, by which time it is hoped that an ongoing dialogue with teachers’ unions will have crystallised into a final agreement. They are a compromise, intended to allow schools to reopen normally on Friday for primary schools and on Monday for secondary schools.

At present, teachers are in school preparing for the official start of the new year.