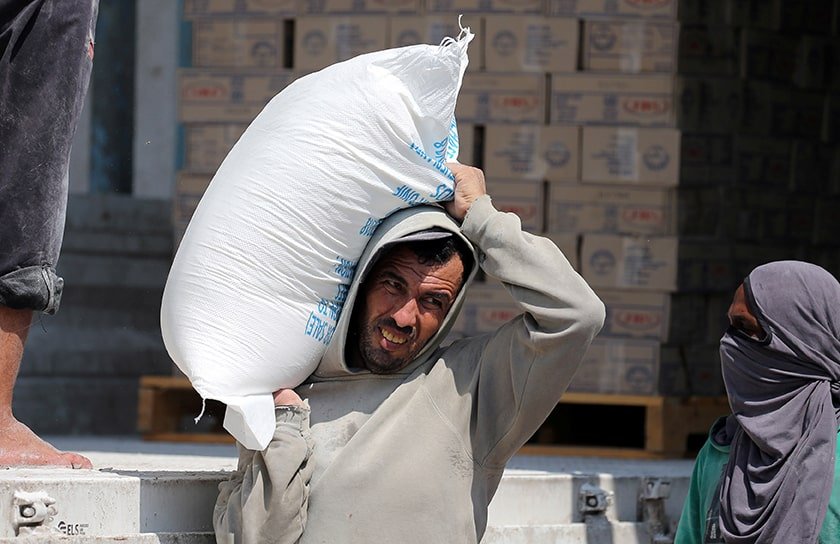 A Palestinian man carries a bag of flour inside an aid distribution centre run by the United Nations Relief and Works Agency (UNRWA), in Khan Younis in the southern Gaza Strip

No, it was Benjamin Netanyahu, prime minister of Israel and newly minted philosopher of power. He and his ally Donald Trump are on the brink of erasing the Palestinian refugees from history, or at least they think they are, and he was allowing himself a little moment of self-congratulation.

He said it last Saturday at the renaming ceremony for the Shimon Peres Negev Nuclear Research Centre, where Israel makes its (unacknowledged) nuclear weapons. It was no coincidence at all that just the previous day President Trump had announced that he was ending all US financial support for the United Nations Relief and Works Agency.

UNRWA is the agency that has looked after the health, education, and sometimes even the feeding of the Palestinian refugees who were driven from their homes during what Israelis call their ‘Independence War’ in 1948-49. It is funded by the voluntary contributions of UN members, and until this year the United States has been picking up about a third of the bill.

It has done a good job in difficult circumstances, with half of its clients living in the Israeli-occupied West Bank and the besieged Gaza Strip, and the other half in refugee camps in Jordan, Syria and Lebanon. Palestinians are the best-educated population in the Arab world, and since 1948 their population has grown from 700,000 to 5 million.

This is not as fast as Israel’s Jewish population, which has grown from 550,000 in 1948 to about 6.5 million in the same period, but if all these Arab refugees were to go home it would return the country to the half-Jewish half-Arab balance that prevailed in early 1948. For this reason, the Israeli government has always been adamant that the Palestinians cannot return, no matter what international law says.

Israeli officials even insist that the Palestinians are not real refugees unless they were actually living in what is now Israel before 1948. Their children and grand-children should not inherit their status, and are therefore not entitled to claim either the ‘right of return’ or compensation for giving up their rights.

You can see why Israeli governments might favour this view, since by now only Palestinians over the age of 70 would qualify as refugees. There’s only about 20,000 of them left, and they’ll all be gone soon. However, Zionists might want to think twice before elevating this way of thinking about refugees into a general principle.

The Jewish claim to Palestine is based on the idea that the ancestors of today’s Jews were made refugees by the Romans about two thousand years ago. If the rights of Palestinian refugees can be legitimately extinguished after the first generation, the Jewish claim becomes equally invalid. But this is just lawyers’ talk, of course.

What really matters is power, as Netanyahu helpfully pointed out, and he and Trump believe they hold all the cards. Trump recognised Jerusalem as Israel’s ‘eternal capital’ last year, cutting the Palestinians out, and Netanyahu is convinced (probably correctly) that the rest of the world will come along eventually.

Now they are going to starve the Palestinians out. In the same week that Trump ended US funding for UNRWA, he also cut off the $200 million annually that the United States gives to the Palestinian Authority, the almost-puppet government that administers the occupied Palestinian territories under Israeli supervision. When they are all hungry enough, he assumes, they will accept Israel’s terms.

Maybe so, but there is a flaw in the grand plan. US funding covered only a third of the UNRWA’s budget and even less of the PA’s. Other countries will continue to cover the rest, and are promising to raise their contributions to replace at least part of the American contribution. The Palestinians will definitely be hungry, but probably not hungry enough to surrender unconditionally.

If there was ever a time when such a radical strategy could succeed, it is now. Syria is off the board, as is Iraq, and most of the other Arab states near Israel are so caught up in their obsession about the alleged threat from Iran that Palestine has dropped to the bottom of their priorities.

But even now the Palestinians cannot simply be magicked away by some tricky redefinition of their rights, and even now there is a limit beyond which no Arab regime can go in terms of abandoning the Palestinians to Israel’s and America’s tender mercies. Nobody in the Arab world loves the Palestinians, but nobody wants to be the first to sell them out.

‘Must do better’ over corruption, CoE tells Cyprus