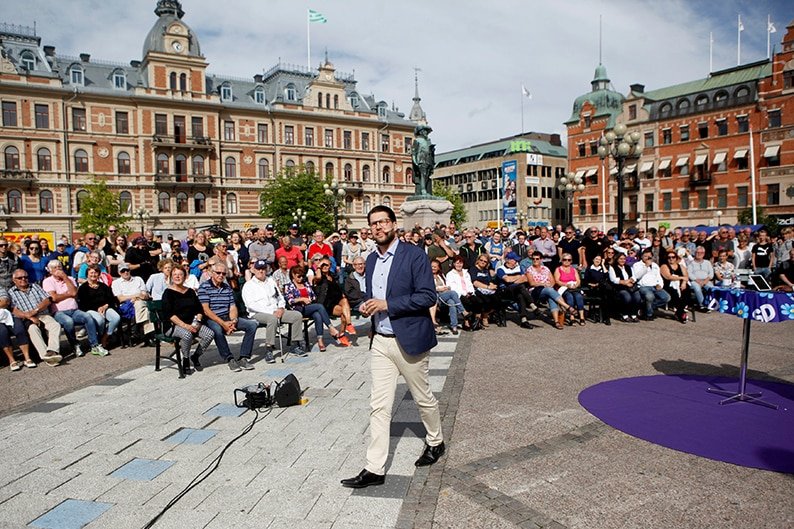 FILE PHOTO: Jimmie Akesson, leader of the Sweden Democrats, campaigns ahead of the Swedish general election which will be held on September 9, 2018

One in three news articles shared online about the upcoming Swedish election come from websites publishing deliberately misleading information, most with a right-wing focus on immigration and Islam, Oxford University researchers say.

Their study, published on Thursday, points to widespread online disinformation in the final stages of a tightly-contested campaign which could mark a lurch to the right in one of Europe’s most prominent liberal democracies.

The authors, from the Oxford Internet Institute, labelled certain websites “junk news”, based on a range of detailed criteria. Reuters found the three most popular sites they identified have employed former members of the Sweden Democrats party; one has a former MP listed among its staff.

It was not clear whether the sharing of “junk news” had affected voting intentions in Sweden, but the study helps show the impact platforms such as Twitter and Facebook have on elections, and how domestic or foreign groups can use them to exacerbate sensitive social and political issues.

Prime Minister Stefan Lofven, whose centre-left Social Democrats have dominated politics since 1914 but are now unlikely to secure a ruling majority, told Reuters the spread of false or distorted information online risked shaking “the foundations of democracy” if left unchecked.

The Institute, a department of Oxford University, analysed 275,000 tweets about the Swedish election from a 10-day period in August. It counted articles shared from websites it identified as “junk news” sources, defined as outlets which “deliberately publish misleading, deceptive or incorrect information purporting to be real news”.

“Roughly speaking, for every two professional content articles shared, one junk news article was shared. Junk news therefore constituted a significant part of the conversation around the Swedish general election,” it said.

Facebook, where interactions between users are harder to track, said it was working with Swedish officials to help voters spot disinformation. It has also partnered with Viralgranskaren – an arm of Sweden‘s Metro newspaper – to identify, demote and counterbalance “false news” on its site.

Joakim Wallerstein, head of communications for the Sweden Democrats, said he had no knowledge of or interest in the party sympathies of media outlets. Asked to comment on his party’s relationship with the sites identified by the study, he said he had been interviewed by one of them once.

“I think it is strange that a foreign institute is trying to label various news outlets in Sweden as ‘junk news’ and release such a report in connection to an election,” he said.

Swedish security officials say there is currently no evidence of a coordinated online attempt by foreign powers to sway the Sept. 9 vote, despite repeated government warnings about the threat.

“Incorrect and biased reporting promotes a harder, harsher tone in the debate, which makes it easier to throw in disinformation and other deceptive tools,” he said.

Lisa-Maria Neudert, a researcher from the Oxford Internet Institute’s Project on Computational Propaganda, said most of the “junk news” in Sweden supported right-wing policies, and was largely focused on issues around immigration and Islam.

Samhallsnytt received donations through the personal bank account of a Sweden Democrat member between 2011-2013 when it operated under the name Avpixlat. A former SwedenDemocrat member of parliament, who also previously ran the party’s youth wing, is listed on the Samhallsnytt website as a columnist.

Samhallsnytt often publishes articles saying Sweden is under threat from Islam. In June, for example, it said a youth soccer tournament in the second-biggest city had banned pork as “haram” – or forbidden under Islamic law. The article is still online with the headline: “Islam is the new foundation of the Gothia Cup – pork proclaimed ‘haram'”.

A tournament organiser told the Dagens Nyheter newspaper that caterers had not served pork for more than 10 years for practical reasons, and there was no ban against eating or selling pork at the event.

Samhallsnytt and Fria Tider did not respond to repeated requests for comment.

“Yes, we put our editorial perspective on news, of course, like everyone else,” he said. “If you are doing a tabloid you cannot have dry, boring headlines, it should have some punch to it. But we do not lie, we do not make false accusations.”

Social media companies have come under increasing pressure to tackle disinformation on their platforms following accusations that Russia and Iran tried to meddle in domestic politics in the United States, Europe and elsewhere. Moscow and Tehran deny the allegations.

A report by the Swedish Defence Research Institute last week said the number of automated Twitter accounts discussing the upcoming election almost doubled in July from the previous month. Such so-called “bot” accounts shared articles from Samhallsnytt and Fria Tider more frequently than real people, the report said, and were 40 percent more likely to express support for the Sweden Democrats.

Facebook said its work with Viralgranskaren to fact check content on its sites helped it quickly identify “false news.”

The company declined to give specific figures about the amount or sources of false news it had recorded around the Swedish election, but said any flagged content is given a lower position on its site, a practice known as “downranking” which it says cuts views by 80 percent. Users who see disputed articles are also shown other sources of verified information, it said.

But the MSB’s counter influence team’s head Tofvesson said there had been a “positive increase” in the work of Facebook, Twitter and other social media companies to help safeguard the election, largely via better communication and coordination with local authorities.