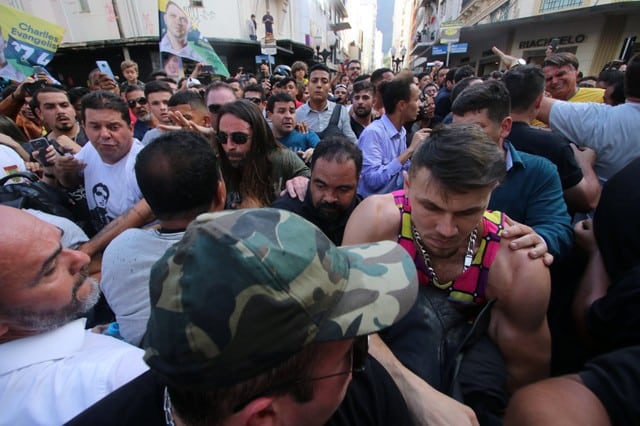 People surround a man suspected (not pictured) of stabbing Brazilian presidential candidate Jair Bolsonaro (top right in yellow) while the latter was campaigning in Juiz de Fora, Minas Gerais state, Brazil September 6, 2018. Felipe Couri / Minas Tribune / via REUTERS THIS IMAGE HAS BEEN SUPPLIED BY A THIRD PARTY. MANDATORY CREDIT. NO RESALES. NO ARCHIVES.

The run-up to a presidential election in Brazil was plunged into chaos on Friday after a knife attack on far-right candidate Jair Bolsonaro put the front-runner in intensive care just a month before the vote.

Congressman Jair Bolsonaro, who has enraged many Brazilians for years with controversial comments but has a devoted following among conservative voters, could take two months to fully recover and will spend at least a week in the hospital, following the life-threatening injuries, doctors said.

Dr. Luiz Henrique Borsato, who operated on the candidate, said the internal wounds were “grave” and “put the patient’s life at risk.” Doctors were worried about an infection since Bolsonaro’s intestines were perforated, he added.

“(The pain) was intolerable and it seemed like maybe something worse was happening,” he said in a video from his hospital bed early Friday.

Talking in a raspy voice with a tube to his nose and hospital monitors beeping nearby, he said, “I was preparing for this sort of thing. You run risks.”

Bolsonaro’s son, Eduardo, also a congressman, said his father had lost two liters (4.23 pints) of blood from the ordeal. He was being to another hospital in Sao Paulo.

The Federal Police said in a statement its officers were escorting Bolsonaro at the time of the knife attack and that the “aggressor” was caught in the act. It said the circumstances were being investigated.

Local police in Juiz de Fora, where the attack took place, told Reuters the suspect, Adelio Bispo de Oliveira, 40, was in custody and appeared to be mentally disturbed.

The attack on Bolsonaro, 63, is a twist in what was already Brazil’s most unpredictable election since the country’s return to democracy three decades ago. Corruption investigations have jailed scores of businessmen and politicians in recent years and alienated voters.

There was fear of violence flaring across Brazil on Friday, as the nation celebrates Independence Day with political groups likely to march in hundreds of cities.

Soldiers, cadets, military police and firemen milled around, awaiting the start of a military parade outside the hospital where Bolsonaro was being treated.

Under Brazil’s campaign laws, Bolsonaro’s tiny coalition has almost no campaign time on government-regulated candidate ad blocs on TV and radio. Bolsonaro must rely on social media and rallies around the country to drum up support. The inability to hold street rallies could impact his campaign.

But Flavio Bolsonaro, another son, said early Friday outside the hospital where his father was treated that he was conscious and the attack was a political boost.

“I just want to send a message to the thugs who tried to ruin the life of a family man, a guy who is the hope for millions of Brazilians: You just elected him president. He will win in the first round,” said Flavio Bolsonaro.

The retired Army captain is running as the law-and-order candidate and has positioned himself as the anti-politician, though he has spent nearly three decades in Congress.

He has long espoused taking a radical stance on public security in Brazil, which United Nations statistics showed has more homicides than any other country.

Bolsonaro, whose trademark pose at rallies is a “guns up” gesture with both hands like pistols, has said he would encourage police to kill suspected drug gang members and other armed criminals with abandon.

He has openly praised Brazil’s military dictatorship and in the past said it should have killed more people.

Bolsonaro faces trial before the Supreme Court for speech that prosecutors said incited hate and rape. He has called the charges politically motivated.

His stabbing is the latest instance of political violence, which is particularly rampant at the local level.

Earlier this year, Marielle Franco, a Rio city councilwoman who was an outspoken critic of police violence against slum residents, was assassinated.

But violence is rare against national political figures, even in the extremely heated political climate that has engulfed Brazil in recent years.

Police video taken at a precinct and aired by TV Globo showed Oliveira telling police he had been ordered by God to carry out the attack.

A few people gathered outside the hospital where Bolsonaro was treated overnight Friday where the scene was calm.

One supporter, Bruno Engler, 21, who is running for a Minas Gerais state congressional seat on Bolsonaro’s Social Liberal Party, said if he could, he would lynch the suspect.

“They call us on the right the intolerant, the violent ones, but those who are intolerant and violent are them,” Engler said, referring to leftist voters.

Greek PM to promise economic relief after years of austerity