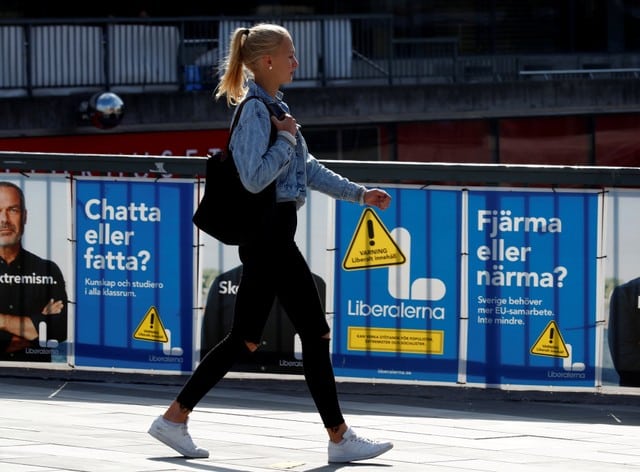 Sweden holds a parliamentary election on Sunday dominated by immigration and its effects on the welfare system.

The Social Democrats, who lead a minority coalition government, are campaigning on a promise to boost welfare spending if elected for a four-year term.

The far-right Sweden Democrats are campaigning on a platform of law and order and tighter policies on immigration.

The Social Democrats and the centre-right Moderates, the biggest party in the Alliance, have vowed to get tough on crime and keep in place temporary immigration restrictions introduced in 2015.

A coalition of the Social Democrats and Greens, backed by the Left Party, is polling at around 40 percent. The polls put the Alliance, grouping the Moderates, the Christian Democrats, the Centre Party and the Liberals, on around 38 percent. The Sweden Democrats have just under 20 percent.

Below are their policies on the main issues.

* Make changes to rules on tax deductions that companies can make and increase taxes on private healthcare insurance and on new, heavily polluting cars to bring in an additional 5 billion crowns annually.
* Total spending in the government budget was 941 billion crowns in 2017.

B/ IMMIGRATION AND ASYLUM:

SOCIAL DEMOCRATS
* After a U-turn on immigration in 2015, the Social Democrat-led government introduced tight restrictions. The Social Democrats have said these will remain in place until there are Europe-wide rules, including on asylum quotas.

SWEDEN DEMOCRATS
* The Sweden Democrats say recent restrictions do not go far enough.
* They say Sweden should only take asylum seekers who come from its neighbours — Denmark, Norway and Finland — and call for the introduction of tougher requirements for citizenship, including a language and culture test.
* They also want to limit labour migration and hold a referendum on Sweden’s EU membership.

CENTRE, LIBERAL PARTIES,
Both parties want a more liberal immigration policy than their partners in the Alliance, particularly in relation to reuniting refugee children with their families. Both also want a common EU asylum policy.

GREENS, LEFT PARTY (ALLIED TO SOCIAL DEMOCRATS)
* The two parties want to return to a more generous immigration policy. The Greens were close to quitting the coalition over tighter rules introduced in 2015.

US ‘has seen evidence of Syria preparing chemical weapons’