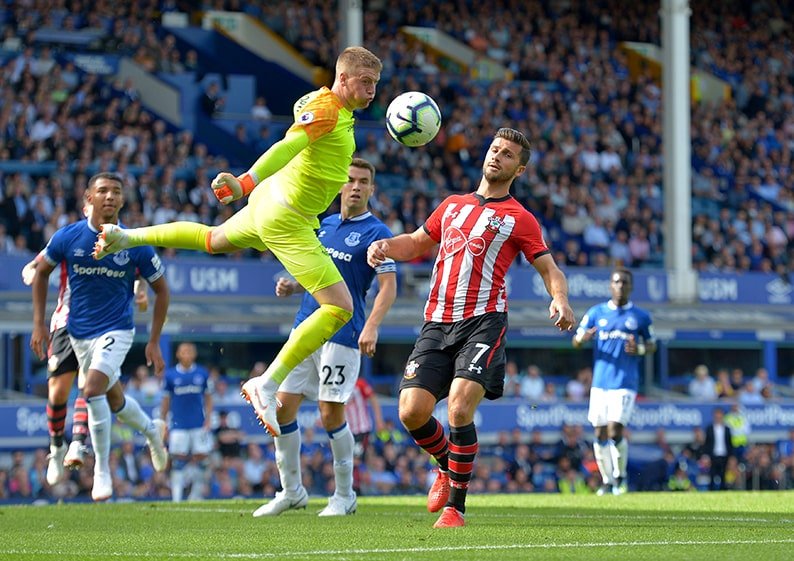 England number one Jordan Pickford insists he would not take the sort of risk which left Liverpool goalkeeper Alisson Becker red-faced.

Alisson, signed by Liverpool this summer for a then-world record fee for a goalkeeper, is renowned for being good with the ball at his feet.

But the Brazil international cost the Reds a goal in their recent 2-1 win at Leicester as he was caught in possession while trying to turn past Kelechi Iheanacho, leading to Rachid Ghezzal scoring into an empty goal for the Foxes.

Ball-playing goalkeepers have been in the headlines since the start of the season with Alisson’s huge move from Roma eclipsed by Chelsea, who signed Kepa Arrizabalaga in a reported £71m deal with Athletic Bilbao.

Manchester City won the Premier League title with Ederson, a player also adept on the ball, in goal and Pickford, too, has established himself as first-choice with both England and Everton because of his similar ability.

The 24-year-old – who helped the Three Lions to the semi-finals of the World Cup over the summer – believes he knows when it is appropriate to put faith in his skills.

“The quality of goalkeepers is very good, you have to be good at using your feet,” he said.

“It’s something I’m good at, something I will keep practising. The new manager at Everton, Marco Silva, is big on it as well, playing out. It’s all about decision-making, doing it at the right times, and I never put myself in too much risk.”

Asked if he had ever had a moment like Alisson suffered at the King Power Stadium, Pickford replied: “I try not to (do tricks) because I don’t want to be caught with it. It’s a risk.

“If it comes off it looks good and if it doesn’t… It’s a style of play and I think that’s the way Liverpool want to play as well. You’ve got to give that one where mistakes will happen and it’s about not making the next one.

“It’s all about managing the game and not making it again in the same game I’d say. It’s going to happen.

“For me, I’m going to try not to put myself in that position to make those mistakes. It’s the timing of the game, really. You don’t want to get too comfortable if you’re wining and start trying to be a number 10 player.

“If it’s on to do I’ll do it and if it’s not we’ll manage the game. For myself that’s where I learn more. The more games you play the more game management you learn.”

While the clamour for football-playing goalkeepers continues, Arsenal’s Petr Cech has been in the spotlight having seemingly struggled to adapt to the demands.

The 36-year-old has looked uncomfortable with the ball at his feet as new Gunners head coach Unai Emery demands his side play out from defence.

But Pickford believes any criticism of the four-time Premier League winner is misplaced.

“He’s been the top keeper in the Premier League for the last 10 or 12 years,” he said of Cech.

“He’s a keeper when you’re growing up you see him making these saves week in week out, probably been the most consistent goalkeeper in these last 10 years in the Premier League, so you can’t give him too much criticism.

“I’m certainly not giving him any. I think he’s a great goalkeeper and someone you look up to.”