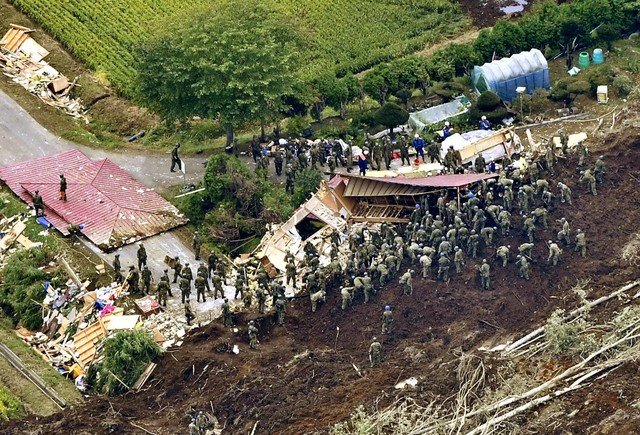 Members of the Japan Self-Defence Forces (JSDF) search for survivors from a house damaged by a landslide caused by an earthquake in Atsuma town, Hokkaido

Rescue workers with dogs searched for survivors on Friday in debris-strewn landslides caused by an earthquake in Japan‘s northern island of Hokkaido, as electricity was restored to just over half of households.

Public broadcaster NHK put the death toll at 12, with five people unresponsive. Earlier, Prime Minister Shinzo Abe said 16 had died, but Chief Cabinet Secretary Yoshihide Suga later clarified in updated numbers that nine had been confirmed dead and nine others were in a state of cardiopulmonary arrest, a term typically used before death is confirmed.

Another 24 were still missing after Thursday’s pre-dawn magnitude-6.7 quake, the latest deadly natural disaster to hit Japan over the past two months, coming after typhoons, floods and a record-breaking heat wave.

Nearly 5,000 Hokkaido residents spent the night in evacuation centres where food was distributed in the morning.

“It was an anxious night with several aftershocks, but we took encouragement from being together and now we’re grateful for some food,” one woman told public broadcaster NHK.

Some 22,000 rescue workers had worked through the night to search for survivors, Abe told an emergency meeting on Friday. With rain forecast for Friday afternoon and Saturday, he urged people to be careful about loose soil that could cause unstable houses to collapse or further landslides.

“We will devote all our energy to saving lives,” Abe said.

As of Friday afternoon, Hokkaido Electric Power Co had restored power to 1.54 million of the island’s 2.95 million households. The utility aimed to raise that number to 2.4 million, or over 80 per cent, by the end of Friday, industry minister Hiroshige Seko said.

Flights resumed from midday at Hokkaido’s main airport, New Chitose. The island, about the size of Austria and with 5.3 million people, is a popular tourist destination known for its mountains, lakes, rolling farmland and seafood.

Soldiers in fatigues and orange-clad rescue workers searched for survivors, picking through debris on huge mounds of earth near the epicentre in Atsuma in southern Hokkaido. Aerial footage showed rescuers with dogs walking through the destruction.

All the missing people are from the Atsuma area, where dozens of landslides wrecked homes and other structures and left starkly barren hillsides.

“I just hope they can find him quickly,” one unidentified man told NHK as he watched the search for his missing neighbour.

The quake damaged the big Tomato-Atsuma plant, which normally supplies half of Hokkaido’s power and is located near the epicentre, forcing it to automatically shut down. That caused such instability in the grid that it tripped all other power stations on the island, causing a full blackout.

Hokkaido Electric was bringing other smaller plants back on line and also receiving some power transferred through undersea cables from the main island of Honshu.

JR Hokkaido planned to resume bullet train operations from midday. It was also trying to resume other train services on Friday afternoon, a spokesman said.

Toppan Printing Co Ltd’s operations at a plant in Chitose, which makes food packages, would remain suspended until it regained power, a spokesman said.

The quake prompted Japan‘s Self-Defence Forces to cancel two joint military exercises in Hokkaido, including the first-ever drill with Australian fighter jets, and a training exercise with the US Marine Corps.

A soccer friendly between Japan and Chile scheduled for Friday in Hokkaido’s main city of Sapporo was also called off.