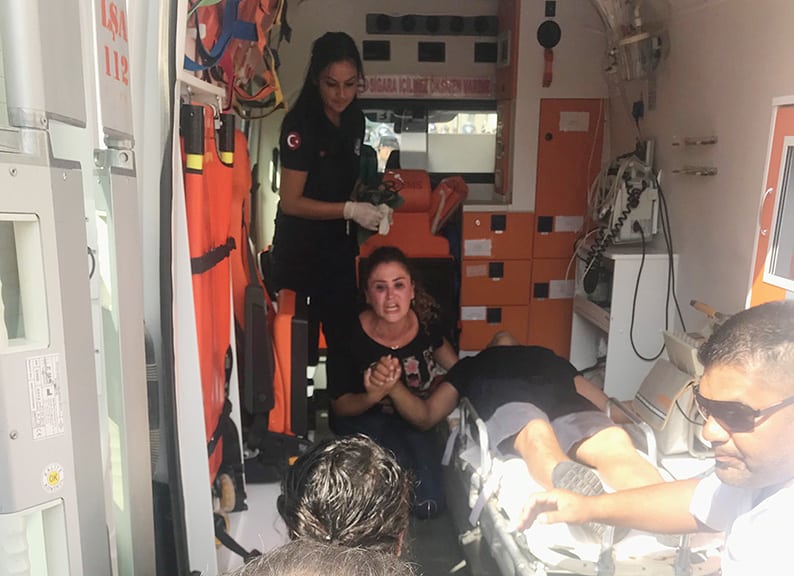 Turkish Cypriot farmers returned to the ‘ministry of agriculture’ with drums and clarinets after their unsuccessful attempt to cross to the south in an effort to involve Greek Cypriots in their protests against the ‘government’ on Friday.

The farmers, angered by the refusal of the authorities to keep barley prices low, were shouting “we want our salaries in euros, we are going to the south” and “we want to sell our milk in euros” on their way to the Ledra Palace crossing.

Police and security forces in the north used tear gas to disperse the crowd heading to the checkpoint and also blocked access to the crossing.

According to Turkish Cypriot sources, a journalist of TV station and newspaper ‘Dialogue’ was taken to hospital by ambulance because he fainted due to the tear gas.

Another person was slightly injured.

The protesters then moved back to the area of the ‘parliament’ near the Turkish embassy but when a strong police presence prevented them from gathering in front of the building they marched to the ‘ministry of agriculture’ where they continued their demonstration.

For the third day in a row, the farmers clashed with police while attempting to drive their tanks into the yard of the ‘agriculture ministry’ to protest against the plummeting of the Turkish lira in the morning. They did not manage to get past security forces.

Turkish media reported that a delegation of the livestock farmers union headed by their leader met with Turkish Cypriot leader Mustafa Akinci earlier on.

The meeting started at 10.30am and they were joined by ‘prime minister’ Tufan Erhurman after one hour.

Just before noon, the farmers withdrew, with their leader Mustafa Naimogullari saying there was no agreement and they would continue to protest.

He noted the union has met with officials for three days without them understanding the problems of the livestock breeders.

The ‘government’, he added, “is now counting even cents”.

Naimogullari explained the farmers are not only demonstrating for their own sector but are also explaining that all sectors are at the brink of bankruptcy.

“We are not like the other unions which calculate the cents for working hours. Our aim is to explain the difficulties the place is going through,” he said. “We came to ask the question of where the country will go when the entire production chain collapses.”

“Even worse days are waiting for us. If only cents count, I and the members of the board of directors [of the breeders’ union] are not responsible for what will happen from now on.”

According to the Cyprus News Agency, unions on Wednesday handed 70 proposals to the government offering solutions to the crisis.

On Thursday a delegation of the protesters had a five-hour meeting with ‘prime minister’ Erhurman and the ‘agriculture and finance ministers’ but again did not reach an agreement.

In the evening, a number of trade unions held a march in the northern part of Nicosia. Turnout was lower than the organisers expected, with CyBC reporting that only 500 to 600 people showed up.