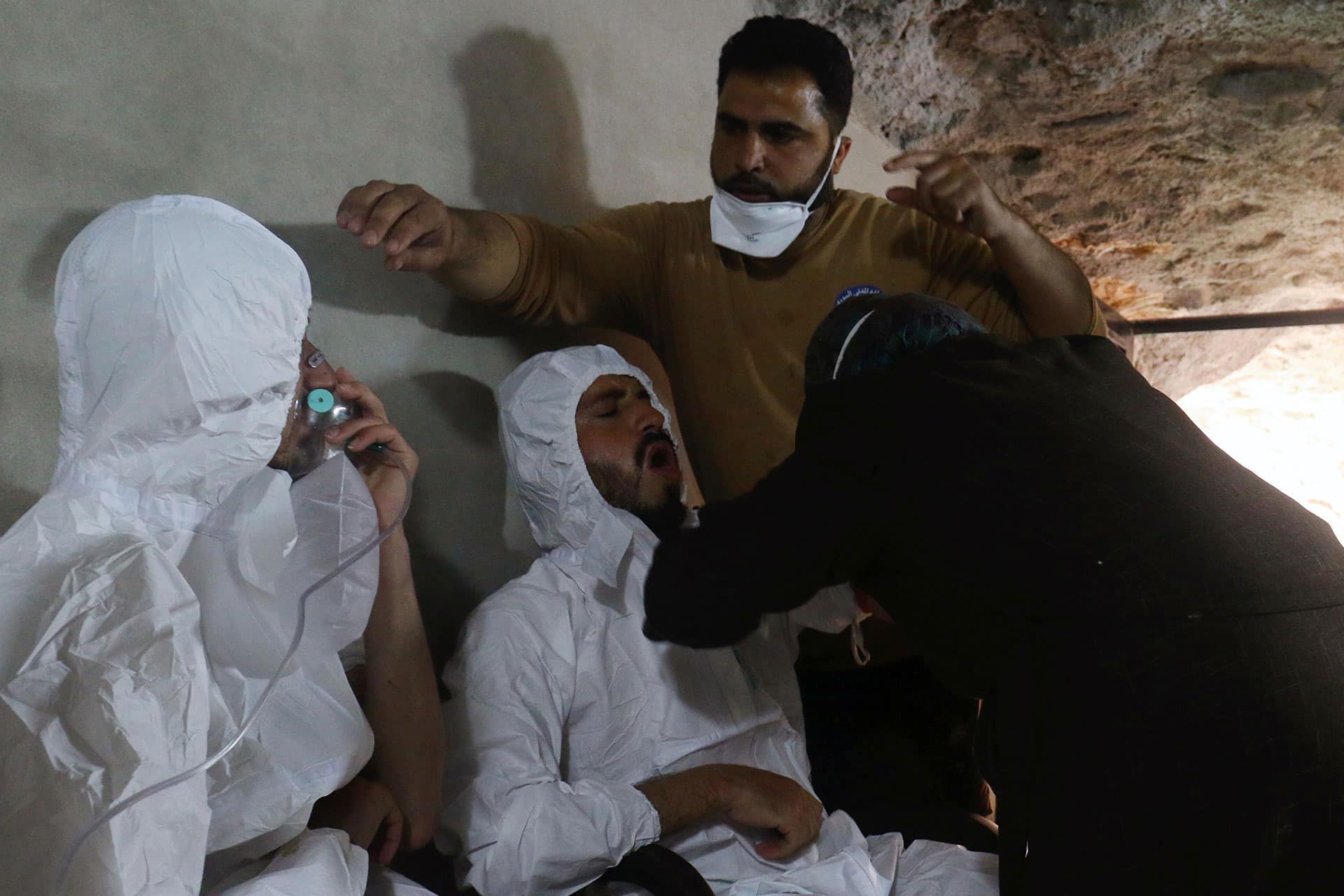 Victims of a gas attack in the town of Khan Sheikhoun in rebel-held Idlib, Syria in April, 2017

There is “lots of evidence” that chemical weapons are being prepared by Syrian government forces in Idlib in north-west Syria, the new US adviser for Syria said on Thursday, as he warned of the risks of an offensive on the country’s last big rebel enclave.

“I am very sure that we have very, very good grounds to be making these warnings,” said Jim Jeffrey, who was named on Aug 17 as Secretary of State Mike Pompeo’s special adviser on Syria overseeing talks on a political transition in that country.

“Any offensive is to us objectionable as a reckless escalation,” Jeffrey told a few reporters in his first interview on the situation in Syria since his appointment. “There is lots of evidence that chemical weapons are being prepared.”

The White House has warned that the United States and its allies would respond “swiftly and vigorously” if government forces used chemical weapons in the widely expected offensive.

Jeffrey said an attack by Russian and Syrian forces, and the use of chemical weapons, would force huge refugee flows into south-eastern Turkey or areas in Syria under Turkish control.

Syrian President Bashar al-Assad has massed his army and allied forces on the frontlines in the north-west, and Russian planes have joined his bombardment of rebels there, in a prelude to a possible assault.

The fate of the insurgent stronghold in and around Idlib province rests on a meeting to be held in Tehran on Friday between the leaders of Assad’s supporters Russia and Iran, and the rebels’ ally, Turkey.

“We will find out to some degree tomorrow if the Russians are willing to come to a compromise with the Turks,” Jeffrey said.

Backed by Russian air power, Assad has in recent years taken back one rebel enclave after another. Idlib and its surroundings are now the only significant area where armed opposition to Damascus remains.

Jeffrey described the situation in Idlib as “very dangerous” and said Turkey was trying to avoid an all-out Syrian government offensive.

“I think the last chapter of the Idlib story has not been written. The Turks are trying to find a way out. The Turks have shown a great deal of resistance to an attack,” he said.

He said the United States had repeatedly asked Russia whether it could “operate” in Idlib to eliminate the last holdouts of Islamic State and other extremist groups. Asked whether that would include US air strikes, Jeffrey said: “That would be one way.”

There was periodic cooperation between the United States and Russia against the same jihadist groups operating in Idlib until mid-2017.

As sides close in on the remaining jihadist forces operating in Syria, Jeffrey said it was time for a “major diplomatic initiative” to end the seven-year conflict. There was a “a new commitment” by the administration to remain in Syria until Islamic State militants were defeated, while ensuring Iran left the country, he added.

While President Donald Trump had signaled that he wanted US forces out of Syria, in April he agreed to keep troops there a little longer.

Trump will chair a UN Security Council meeting on Iran during an annual gathering of world leaders in New York later this month. The meeting will focus on Iran’s nuclear program and its meddling in the wars in Syria and Yemen.

France has invited the United States, Jordan, Egypt, Saudi Arabia, Germany and Britain for talks on the sidelines of the UN meeting to discuss Syria, Jeffrey said.

He said Assad “has no future as a ruler” in Syria, but it was not up to Washington to get rid of him and it would work with Moscow on a political transition.

“Right now (the Syrian government) is a cadaver sitting in rubble with just half the territory of Syria under regime control on a good day,” Jeffrey said.