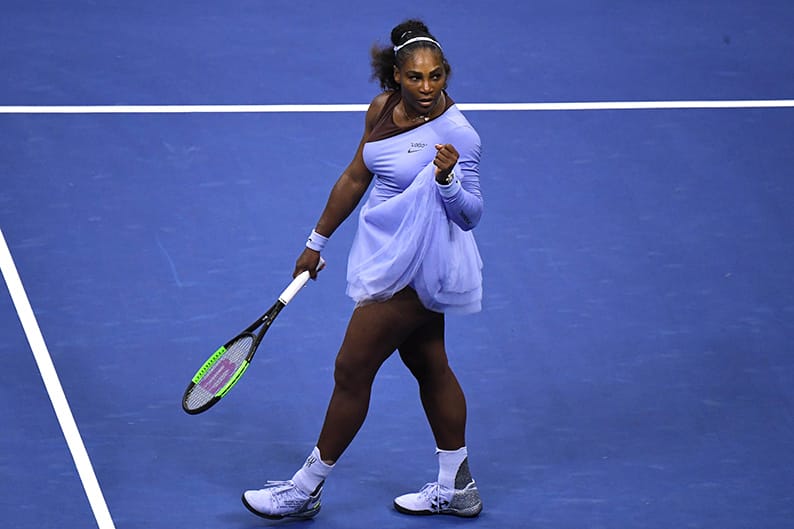 Serena Williams of the United States

Serena Williams choked back tears as she contemplated the year-long journey that has taken her from fighting for her life in a hospital bed to the verge of history.

Williams overwhelmed Anastasija Sevastova 6-3 6-0 to reach her 31st grand slam singles final. There she will face a first-timer 16 years her junior in Naomi Osaka, who grew up idolising the woman she must now try to beat.

Williams never expressed any doubt that she would return to the game following the birth of her daughter Olympia last September, but that seemed an awfully long way away when she developed life-threatening complications.

The 36-year-old said: “It’s really incredible. A year ago I was literally fighting for my life after I had the baby. Every time I step out on this court, I am so grateful I have an opportunity to play this sport. No matter what happens in any match – semis, final – I feel like I’ve already won.”

Williams has dropped only one set in the tournament and, although she was similarly dominant in getting to the Wimbledon final only to lose heavily to Angelique Kerber, she looks to have moved up several notches.

It was her net play that impressed the most against the wily Sevastova, a 28-year-old Latvian appearing in her first slam semi-final, who won the first two games and then only one of the next 13.

Williams came to the net 28 times and won 24 of the points, not giving her opponent a chance to disrupt her rhythm.

Frighteningly for the rest of the women’s game as Williams chases the title that would see her equal Margaret Court’s all-time record of 24 slam singles crowns, she does not believe she is yet back to anything like her best.

Williams put her current level at only 50 or 60 per cent, and said: “I definitely don’t feel myself yet. My mom said it takes a full year to get back. I’m at a full year now. But I’m also playing a sport professionally.

“Even my body is different. I actually weigh less than I did before I got pregnant, but it’s distributed differently now.

“This is the beginning. I’m not there yet. I’m on the climb still. I just feel like not only is my future bright, even though I’m not a spring chicken, but I still have a very, very bright future. That is super exciting for me.”

Osaka spent the formative years of her childhood living in New York and first came to Flushing Meadows as a fan hoping to catch a glimpse of Williams.

Osaka was only a year old when Williams won her first slam title here in 1999. Now, 19 years later, she will try to become the first Japanese woman to win a grand slam singles title.

Osaka and Keys, last year’s beaten finalist, are both players built in the same power mould as Williams but the most impressive thing about Osaka’s performance was the rest of her game and especially the poise she showed to save all 13 break points she faced.

Asked how she did it, she replied: “This is going to sound really bad but I was just thinking, ‘I really want to play Serena’.”

Her on-court message to Williams was simply: “I love you,” but Osaka insists she will not be happy simply to share the same stage on Saturday.

“Of course it feels a little bit surreal,” she said. “Even when I was a little kid, I always dreamed that I would play Serena in a final of a grand slam. Just the fact that it’s happening, I’m very happy about it.

“At the same time I feel like, even though I should enjoy this moment, I should still think of it as another match. I shouldn’t really think of her as my idol. I should just try to play her as an opponent.”

And as for how those dreams ended: “I don’t dream to lose, so… That’s how I’m answering your question.”