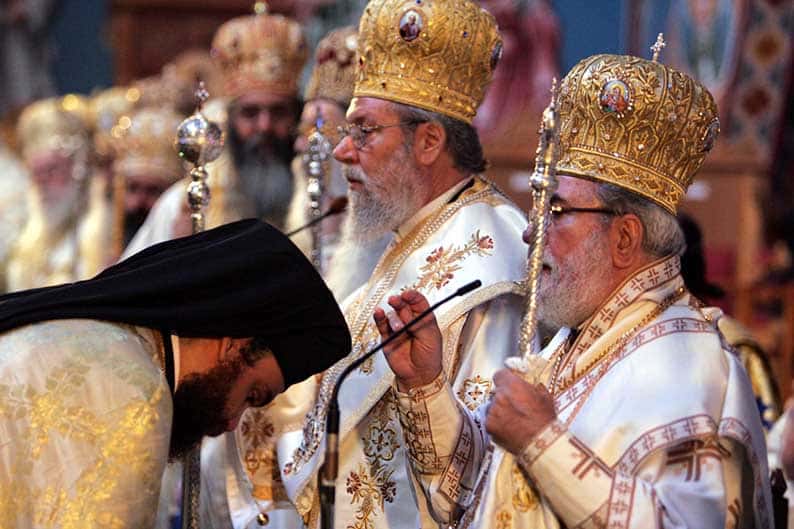 I had intended keeping my big mouth shut regarding church matters and clericalism, but some glaring events just do not allow the exercise of deference. In fact they provoke you to be more scathing. Take, for example, the complete exclusion of the role and significance of the Maronites from the new textbook on the history of Cyprus for the second year of lyceum. The responsibility for this utter contempt shown to some of our compatriots lies with the archbishop, the super-minister of education.

Something bizarre is happening in our schools. While students learn about different political systems – democracy, totalitarianism, communism and fascism, etc – they have never heard of the one regime that lasted centuries in Cyprus and today exists in a new form: clericalism. Under this regime, the clergy dominates the political, economic, social and cultural life of a country. The church authorities who are also the masters of the “official religion” – in our case Greek Orthodoxy – disregard or persecute, occasionally mercilessly, those of different religions, beliefs and ethnic origin.

As a result of the distorted history taught in schools, it is widely ignored that during Ottoman rule the church allied itself with the conquerors and a clericalist regime that sucked people dry was imposed. Apart from the disgraceful collaborationism, the church imposed unendurable taxes and, at a time when there were no banks, had the role of usurer, taking over the land of poor farmers in times of drought.

The commercial activities of the priests here, and in Greece, were despicable and were described in the early 19th century by novelist and scholar Adamantios Korais who wrote: “The priests transformed the churches into dens of thieves, shamelessly selling mystery and blessings … they roam the villages like ravenous wolves in order to grab mercilessly from the mouths of starving Christians that little bread, which even the greed of the Turks is ashamed to grab.”

The arrival of the British in Cyprus in 1878 was a big blow to clericalism because the colonisers intended to create a secular regime. In the process, the new conquerors turned the priests’ world upside down. From tax-setters, they became taxpayers. As the High Commissioner Haynes-Smith noted in 1904 this big reversal “was too much to bear”. The church hierarchy realised that reacquiring their privileges would be possible only if Cyprus was unified with Greece, a country in which the separation of church and state did not exist (nor does it today).

This was how they thought up the idea of Enosis which culminated in the armed struggle which they organised, promoted and subsidised with the well-known, tragic conclusion. Consequently, if we want to delve into the root causes of the calamity we suffered in 1974 we should examine the modus operandi of the priests. They demanded self-determination which in Cyprus was tantamount to union with Greece (foreigners who are not naïve did not make a distinction between the two), in contrast to the rest of the 70 British colonies, which successfully made independence their objective without shedding a drop of blood (there were a couple of exceptions).

The church hierarchy failed with its appeals to the UN, failed with its armed struggle and failed with its so-called, international enlightenment campaign. They failed in every respect. All Cypriots are still paying the extortionate price of clericalism’s spectacular failure today.

After the stunted independence of Cyprus and especially after the establishment of the Greek Cypriot Republic (to be precise) in 1964, a new clericalism developed, tolerated and encouraged by the state. In 1996 the Official Gazette published the Law on the Protocol of the Cyprus Republic (59(I)/1996 which formalised the new clericalism. By protocol, we refer to the ceremonial hierarchy followed for all official functions organised by any public authority, organisation or foundation. At the apex of the pyramid is the president of the Republic and immediately below is the archbishop! The latter is higher in the Republic’s pecking order than the president of the House of Representatives, the parliamentary party leaders, former presidents and the attorney-general etc.

This law shatters the principle of religious freedom guaranteed by the 1960 constitution. Since it was passed most of the important visitors to Cyprus rush, after their meeting with the president, to an audience with the archbishop. How backward! What tolerance by the political parties! What apathy by Cypriot society!

But the archbishop does not confine himself to adhering to protocol. He actively interferes in politics with the tolerance of the polity. For example, he publicly condemns a bizonal, bicommunal federation; in 2013 he urged the ‘faithful’ to vote for Nicos Anastasiades, and he shamelessly flirts with Elam (confirming the view that the church is inextricably linked to the extreme right).

The most infuriating thing, however, is the complete control the archbishop exercises over the education ministry. Because of this, the distortion of history will continue. The church will continue to pose as the leader of resistance to Turkish rule. Children will continue to be taught different fairy-tales about the “secret school”. Minorities such as the Maronites will continue to be eliminated from history books as they are “heretics”. The lesson of religious studies will never be introduced. Enlightenment will remain a dream. The vulgarisation of public life will bloom.

The church, in its magnanimity, allows politicians, the legislature, the government to operate within defined limits, but it insists on having – and unfortunately succeeds – a super-governmental role. This is clericalism.

Would ‘not following Mauritius’ be a smart move?

UDI: Thorn in the flesh of Turkish Cypriots