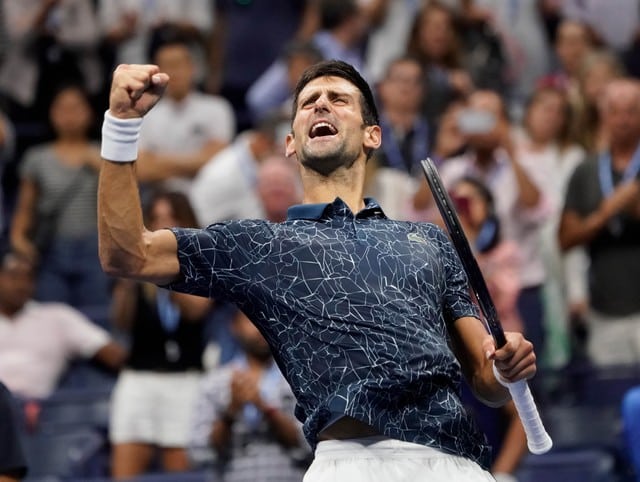 If Novak Djokovic wins a third US Open title, he would join 14-time Grand Slam winner Pete Sampras in third on the all-time list, trailing only Roger Federer (20) and Rafael Nadal (17)

“He’s a big-time player. He’s a big-match player. He’s a Grand Slam winner. He’s playing tennis of his life, without a doubt, in the last 15 months,” Djokovic said on Friday of his “dear friend” Del Potro.

Clearly Djokovic will have to neutralize the 6’6″ Argentine’s blistering serve at the Arthur Ashe Stadium: Del Potro fired 68 aces during the tournament, winning 82 percent of his first serve points.

He came crashing into this year’s tournament, winning his first 12 sets in a row and toppling his first two opponents in under two hours each.

There are other important statistics to consider, however, which clearly suggest that brain will play as significant a part as brawn on Sunday.

Djokovic has 13 Grand Slam titles; Del Potro has just one, a U.S. Open championship he wrested from then-defending champion Roger Federer in 2009.

If Del Potro relies heavily on power, Djokovic, fresh from winning the Wimbledon title two months ago, is a master tactician who never gives up on a point. He may be out-hit – but he is rarely out-thought.

The Serb has saved 72 percent of break points against him during the tournament, while getting 82 percent of his returns in, more than any other competitor at Flushing Meadows this year.

He struggled through broiling temperatures, surviving a first-round scare during which officials brought a trash can to a sweat-drenched Djokovic fearing he might vomit from heat-related illness.

But he bounced back to enter Sunday’s match with a 13-set winning streak, leaving in his wake a series of stunned opponents.

One of those was Australia’s John Millman, who caused a major shock by defeating Federer in the fourth round.

“Novak sometimes flies under the radar a little bit. But the guy’s won a lot of Grand Slams, and he knows how to win them,” Millman said after losing to Djokovic in the quarter-finals.

“He’s probably one of the most in-form players.”

Even Del Potro accepts that the odds are on Djokovic’s side. But he refused to rule out a shock. Brawn, he suggested, may have its day on Sunday.

“I will try to make the surprise again.”

THE GAME IS SET TO START AT 11.00 Eastern European Time (EET)

Twice champion Djokovic, who has appeared more impressive with each passing round, cruised past Japan’s Kei Nishikori in the semi-finals.

The Serbian returned from a six-month injury layoff at the Australian Open this year and ended up requiring elbow surgery following his last-16 exit in Melbourne.

He roared back to top form winning the Wimbledon title and is a strong favourite to capture a 14th major crown at Flushing Meadows.

Del Potro has returned to top form in New York, the scene of his lone Grand Slam victory in 2009, after overcoming wrist injuries that have dogged his career.

The big-serving Argentine cruised through the opening four rounds without dropping a set before overpowering home favourite John Isner in the quarter-finals.

Del Potro has won just four out of 18 career meetings with Djokovic, and lost each of their last three encounters.