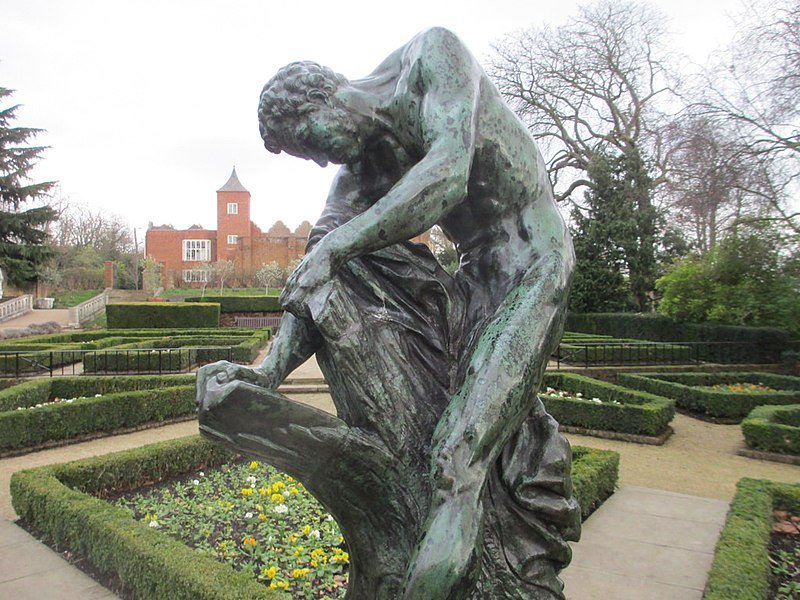 If the UN gives up on the talks, does the EU have an obligation to review its relations with the Turkish Cypriots?

It was a beautiful day in London last Sunday as I strolled through Holland Park in Kensington for my morning constitutional when I came across a small bronze statue situated in the middle of the park.

The statue was of Milo of Croton and the plaque next to it read: ‘This 19th Century bronze figure is of Milo of Croton, a legendary Olympic athlete renowned for his great strength who lived at Croton, a Greek settlement in southern Italy in the 6th Century BC. The story goes that on seeing an oak tree partly split open with a wedge he tried to wrench it apart but only succeeded in causing the wedge to fall out, thereby trapping his hands. He was left helpless prey to the wild beasts, which soon devoured him.’

After leaving the statue I pondered the myth. Myths and legends are apocryphal. They are often treated as fact though more often than not they tell truths rather than true stories The Bible is full of metaphors wrapped in myths and Homer’s epic poems in the Iliad and Odyssey are full of truths even if the stories they tell are fantastical.

Milo was a strong man and a great athlete who drank a lot of wine. But the manner of his death is a myth that conveys two truths at least: some jobs require more brains than brawn and a wedge can keep things together as well as apart.

I must have been in a peculiar frame of mind, however, because when I saw the statue I thought Milo was trying to remove the wedge so as to restore the tree to its natural unity. On that scenario the moral of the story is woe betide those who try to remove the wedge between opposing sides for they shall be eaten by wild beasts.

Which is what happened to poor old Espen Barth Eide – remember him? He tried hard to remove the wedge between the two sides in Cyprus by seeking to persuade them to transcend their differences and ended up being devoured by ravenous beasts with a gargantuan appetite for scapegoating.

The UN secretary-general has now decided he has had enough and sent the austere Jane Holl Lute to read the Cypriots the riot act. She came, she saw and she delivered the message. So it’s now or never. Great song. The question is: are the lyrics apposite?

The political reality is that it is all hopeless because for reasons going as far back as the fall of Constantinople, Greeks and Turks loath one another – they can’t even agree on the name of the coffee they drink. It is of course Turkish coffee, but it is also Greek Coffee.

But the legal reality is not hopeless. Cyprus is a member of the European Union. The Turkish Cypriot community has never sought to gainsay this reality and the time is fast approaching to tap into it to the full.

As a member state Cyprus surrendered huge chunks of sovereignty to the EU in 2004 by adopting the EU legal order known as the acquis communautaire. However the acquis was suspended in northern Cyprus pending a comprehensive settlement. This was done by protocol 10 attached to the 2004 treaty of accession. But is there an obligation to revisit the suspension if a settlement cannot be reached?

The question for decision in Brussels is what are the EU’s obligations if the UN declares a comprehensive settlement unachievable and withdraws from the scene?

If the UN definitively decides the two sides are unwilling or unable to reach a settlement, the primary purpose of protocol 10 falls away. The suspension of the acquis in northern Cyprus can only be lifted, however, if the European Council, acting unanimously on a proposal from the European Commission, decides to lift the suspension.

Thus, although it was necessary to suspend the EU legal order when Cyprus joined in 2004 pending a settlement, the text of protocol 10 does not require a settlement for the suspension of the acquis to be lifted.

Protocol 10 was drafted very shortly after 76 per cent of Greek Cypriots rejected the Annan plan so the EU was well aware that a settlement could prove elusive, and therefore left the door ajar to enable the EU to proceed without a settlement if necessary.

The Republic of Cyprus would have the right to veto any proposal brought to the European Council by the European Commission to lift the suspension, but it cannot block the commission from embarking on formulating a proposal to lift the suspension. Politically this is hugely important because if the commission embarks on such a project, the centre of gravity would move to Brussels rather than Nicosia, and although the RoC would be as much a player as previously, the dynamic would be different and take place in the context of the EU’s obligations under the treaties.

So if the Turkish Cypriot leadership has any political nous it would think the unthinkable: withdrawal of the 1983 UDI before a solution. If the UN decides that a settlement is not going to happen, the Turkish Cypriot community needs to be in a position to request the European Commission to negotiate terms for lifting suspension of the acquis in northern Cyprus and do the unthinkable to set the ball rolling.

An opportunity for doing this may come soon if the UN peacekeeping force, Unficyp, withdraws from the buffer zone as the EU would then be obliged to revisit protocol 10. Special provision was made in protocol 10 because it is an EU border that will have to be adjusted if the Unficyp withdraws.

As and when this occurs it would be inconceivable for the European Commission to reconsider the provision concerned with the EU’s border with northern Cyprus without considering the legal consequences of failure to reach a settlement.

There is a powerful case to be made that the European Commission has an enforceable obligation under the mandatory equality provisions of the EU treaties to begin the process of lifting the suspension of the acquis in northern Cyprus if a settlement proves impossible. But as matters stand such an obligation cannot be engaged because the entity representing the Turkish Cypriot community has been declared illegal by the UN.

Every crisis is also an opportunity. The adverse effects of the devaluation of the Turkish lira on the Turkish Cypriot community may be a good time to consider adopting the euro as the currency in northern Cyprus.

But this too can only be as part of the process of lifting the suspension of the acquis. So whatever Turkish Cypriots think of UDI, it is a thorn in the flesh of their community that needs urgent and rigorous cost-benefit evaluation.

The harsh reality is that the European Commission cannot formally engage in negotiations about the terms of lifting the suspension of the acquis with an illegal entity – and neither can the European Central Bank contemplate introducing the euro as the currency in northern Cyprus.

Food for thought, bearing always in mind the Turkish Cypriot community has never voted in favour of UDI whereas it as good as voted for joining the EU in 2004 and 2015.

A new form of clericalism: The church continues to dominate the political, economic, social and cultural life of Cyprus

Tales from the Coffeeshop: Lessons in capitulation