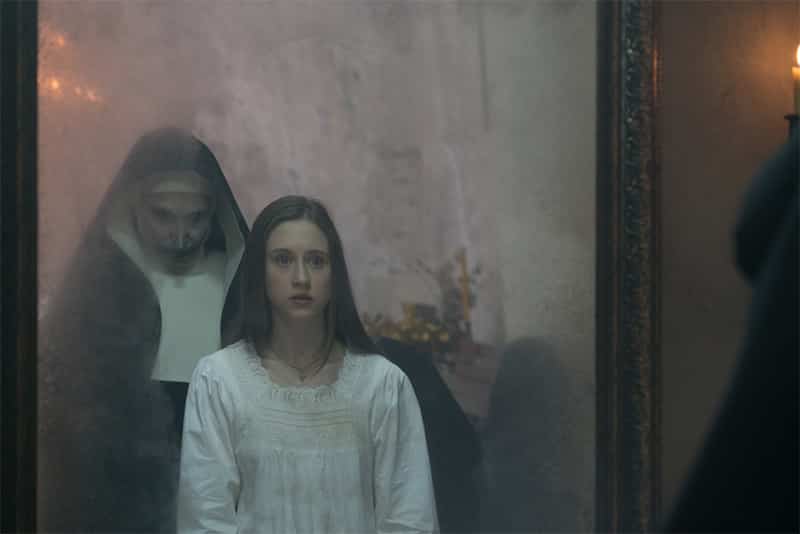 First came The Conjuring, then Annabelle and its sequel – and now comes The Nun, the link in all cases being Ed and Lorraine Warren, the husband-and-wife ghost hunters who had a hand in investigating all these various hauntings. Then again, the connection is tenuous. Ed and Lorraine are briefly glimpsed at the beginning and end of The Nun – but most of the film is set in a convent in rural Romania, a land so foggy that even the inside of the convent is shrouded in fog, next to a village so rustic that inhabitants spit ostentatiously when the Evil in the Abbey is mentioned. All that’s missing is Bela Lugosi summoning ‘ze creatures of ze night’.

Say what you like about The Nun, at least it departs from the formula. The Conjuring worked a particular style that was austere and, in truth, quite sadistic: a slow, drawn-out build-up, sliding inexorably from normal to progressively strange. Shadows flitted in the background, objects moved by themselves; the audience was placed in the position of knowing more than the characters, which felt quite uncomfortable. None of that applies to The Nun, which is not at all scary – at least in the suspenseful way of its predecessors – and not at all austere, either. This film is flamboyantly nuts, going from one ridiculous bit of mayhem to another. Never mind knowing more than the characters, the audience barely even knows what’s going on. It’s actually much closer to an incoherent action-fantasy blockbuster like, say, The Mummy than it is to The Conjuring or Annabelle: Creation.

Its trump card is the evil nun in the trailers and posters, the one with angry black eyes staring out from white pancake makeup – and you’d expect her to be teased and fleetingly glimpsed for most of the first hour, but in fact she appears inside the first five minutes. The Nun has no truck with the notion that demons lose most of their potency once you’ve actually seen them. It starts like a trailer, throwing out a bunch of random images, then we’re in a prologue where a nun hangs herself from the window of her cell rather than give in to Evil. Cut to an outside shot, with the body hanging down and a murder of crows skulking ominously. The rope snaps, the body falls, the crows rise up in a frenzied cacophony. Cue title.

Stray Gothic moments like that are the only saving grace in the film, which is otherwise – let’s face it – pretty terrible. There’s an over-abundance of ghouls, killing the tension; the plot never pauses, but never gets started either. You do, however, get iconic images like a field of wooden crosses glimpsed in night and fog, or a cheeky overhead shot of a white blob (our heroine, a novitiate played by Taissa Farmiga) surrounded by black blobs (the nuns), immediately followed by a gust of malevolent energy – the Evil! – which scatters the black blobs like so many ninepins. I can’t exactly recommend the film on the basis of half-a-dozen neat visual moments, but they do offer some compensation.

Farmiga (the much younger sister of Vera Farmiga, who incidentally plays Lorraine Hunter) is also an asset, an offbeat, tentative presence as Sister Irene, sent by the Vatican to investigate the convent. Demian Bichir is Father Burke, her superior, who at one point is confronted with a glowering demonic ghost-boy, then a giant snake shoots out from the boy’s mouth and knocks Burke into an empty grave, burying him alive; “There is a powerful evil presence in this place,” he opines, hilariously, when Irene finally manages to dig him out. (Really? You think?) Also silly is Jonas Bloquet as a French (actually French-Canadian) sidekick known as ‘Frenchy’, who spends some of his screen time toting a comically huge wooden cross which he’s pulled up from one of the graves as protection – and also makes a bid for Needless Clarification of the Year, when Irene mentions an amulet that contains the blood of Christ: “Christ? Jesus Christ?”. The Conjuring was never like this.

That’s the point: The Conjuring, its sequel, and the first half of Annabelle: Creation (not Annabelle itself, which was shoddy) worked in a classical style that took its time and parcelled out drama to create queasy tension. The Nun aims lower, for illogical horror spectacle and perfunctory jump-scares: Irene looks in a mirror, looks away, looks back and the mirror is suddenly full of killer nuns with big teeth – then the mirror smashes, a crucifix falls, and we’re on to the next bit. The formula has changed, quite deliberately, and the jump-scares don’t really work – whether because there’s no build-up, or because the ‘evil’ is just random bedlam – but they’ll work for a teenage audience primed to jump, and that’s what matters. “God ends here” reads a sign on the wall outside the Bad Place. So does everything else.