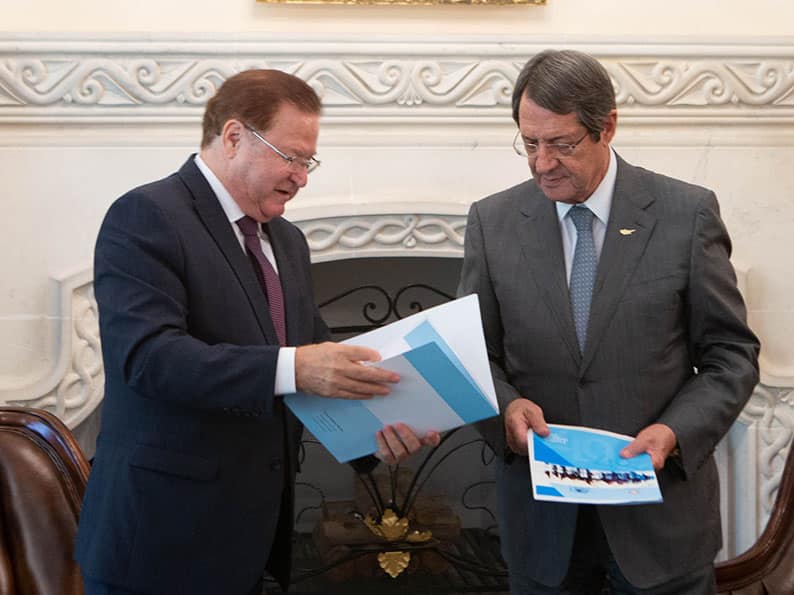 President Anastasiades with the head of the PSC Giorgos Papageorgiou

Quantifiable assessment criteria should be introduced into the civil service so that employees are evaluated objectively, eradicating cronyism, President Nicos Anastasiades said on Monday.

He made the comments while meeting with officials of the Public Service Commission (PSC), who handed him the annual report on the body’s activities for 2017.

Anastasiades went on to bemoan the fact that government legislation aiming to introduce assessment criteria for civil servants is still languishing in parliamentary committee.

“Give me one reason why these bills are not being passed,” he remarked rhetorically, hinting that the parties were to blame for the delay.

The president said his government was willing to get feedback from the parliamentary parties on the relevant legislation.

The bills would go a long way toward curtailing party meddling in appointments and promotions, he added.

“It is high time that meritocracy be enshrined [in the civil service], so that everyone can feel that they are productive, that they have prospects because of their qualifications, and not because someone ‘has their back’.”

Chiming in, the head of the PSC Giorgos Papageorgiou pointed out that, under the current assessment system, 95 per cent of civil servants are graded as ‘excellent’.

Meanwhile the number of complaints filed by civil servants in courts, particularly for being denied promotion, are on the rise. The increase in complaints occurred after the government began to gradually open up positions that were previously ‘frozen’ as part of an austerity drive.

Papageorgiou said that the PSC was doing the best it could with the tools at its disposal.

As of January 1 this year, all applications are being filed online.

Some 22,000 applications have been filed since the beginning of the year.