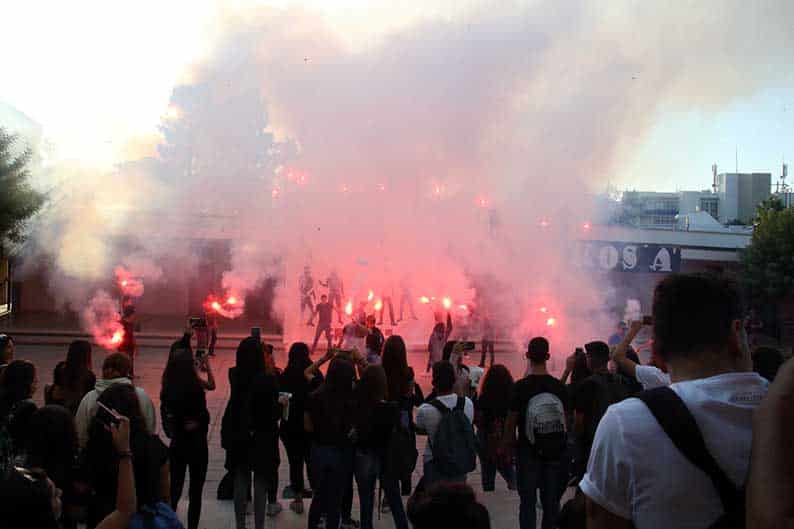 Students at a Limassol lyceum waving flares on Monday morning

By Doris Christodoulou and Annette Chrysostomou

Extensive vandalism, gangs throwing flares, upsets over the state of buildings and the ongoing dispute with teachers’ unions marked the beginning of the school year on Monday.

From Limassol, Education Minister Costas Hambiaouris welcomed children back to school calling it a “day of joy and celebration” though as part of their measures, teachers islandwide refused to read out his annual message to students. Instead he published it on Sunday.

There was chaos first thing when a hooded gang entered the lyceum at Ayios Ioannis in Limassol on motorbikes at around 9am, shouting while throwing flares and smoke bombs in the schoolyard, and scaring students.

Upset parents and teachers reported the incident to the police but by the time they arrived the gang had gone.

Reportedly, the same group was involved in two more failed attempts to enter the Petrou and Pavlou Lyceum as well as the Laniteio Lyceum, both in Limassol. Entrance was prevented after teachers managed to quickly close the gates. They continued to cause a disturbance outside before riding away.

Also in Limassol, at the lyceum of Agios Spyridonas, students were seen writing slogans on the walls with spray and were arrested. After being warned off in the presence of their parents, they were charged and released.

In Nicosia on Monday morning, several students gathered at the schools before class and hung up banners expressing their anger and indignation for the crisis in education. Incidents were reported at the lyceum of Ethnartira Kyprianou, as well as in the lyceum of Archbishop Makarios III in Dasoupolis.

The night before schools opened, in line with ‘tradition’ lyceum students in Nicosia stayed up all night on the school premises but police received dozens of calls about disturbances and vandalism and had to send patrols to eight secondary schools across the capital. Similar events have been occurring for the past two years.

After police checks several bookings were made of students driving motorbikes without helmets or vehicles without a driver’s licence.

Other than that, and the standoff with teachers’ unions, the first day at school went smoothly. Instead of reading out the minister’s message, school heads gave a brief address before classes commenced.

Head of secondary education Kyprianos Louis said this school year 114 schools were operating, 64 of which are gymnasiums, 38 lyceums and five evening secondary schools. Some 22,858 pupils are enrolled in gymnasiums and 17,150 in lyceums, about the same number as last year.

Christos Hadjiathanasiou, head of the primary-schools department, reported on the number of children in primary schools. A total of 51,748 children are registered, 666 more than in 2017.

“We have 331 elementary schools compared to 332 schools we had last year. Kindergartens this year are 272 this year compared to 271 last year,” he said.

Everything went well, he said, in all regions, despite the dispute. “We wish for the climate to improve and our schools to work in the best possible way,” he added.

Hambiaouris, in his statement in Limassol talked briefly about the impasse in education, saying he did not know the intentions of the unions.

Parents on Monday also had a dig at the teachers.  “I don’t understand what the teachers are after. It seems they change their message every day,” said Despina Kyriakidou. “I would be willing for my children to lose out on school if there was going to be real change for the better.”

“I am not against teachers fighting for their rights as long as it doesn’t overly affect the education of the kids,” added Maria Ioannou, 37, who has a 10-year-old. “It would be okay with me if they went on strike for a couple of days but not longer.”

On top of some of the other difficulties on Monday several schools had ongoing works in some areas.

The primary school in Episkopi, Limassol remained closed on Monday after a decision by parents and community leader village authority as works continue for a third year. Parents have branded the school a ‘minefield’ as in addition to it resembling a building site, they say there are problems with the electrics. Last Thursday two teachers reportedly narrowly missed an electric shock. The parents said the minister visited the school in May and promised that the second phase of the building works would be finished before the start of the school year but they have not.

US to take tough stance against International Criminal Court

The history of American jazz